The things he has seen and heard in the last few weeks of the pandemic have been strange even for Hector Fabio Idrobo, a veteran ombudsman in the Colombian town of Toribío. Idrobo describes men in plainclothes and in uniforms approaching boys and girls in the town, with its population of 30,000, giving them presents and invitations. "They usually approach the youngest, giving them CDs or videos and engaging them in conversation,” Idrobo reports by phone.

"If they're with the guerillas, they talk about weapons and their exciting life in the mountains.” If they're with the cartels, they lure the young people with money, he says. "That's how they get into the heads of boys and girls who often come from poor and dysfunctional families." In their next step, they invite the kids to the camps, present them their weapons and give talks to them. "Before these kids know it, they’re in uniforms themselves.”

Idrobo says that armed groups have always sought young new recruits in Toribío. But the 37-year-old, who was the town's ombudsman from 2013 to 2016 and returned to that post a few months ago, says that they have never recruited as aggressively as they have since Colombia imposed a lockdown to prevent the further spread of COVID-19.

Regional conflicts are flaring up again in many regions in Colombia, and children are often exploited as fighters.

Ombudsmen are government employees responsible for listening to citizens' concerns and then serving as their advocate to the government. Under the Colombian constitution, they are also responsible for monitoring whether human rights are being upheld and serve as a watchdog over the government's action. This makes Idrobo a kind of complaints box for inhabitants. People are telling him confidentially that their children are simply going "into the mountains,” that they are being taken away, sometimes because the guerrillas demand a "quota,” like a son from a family with lots of children.

Toribío, located in the southwestern Colombian department Cauca, occupies a strategic location in the country’s landscape of violence. Cauca is one of the largest areas for cultivation of coca and marijuana in the country, and is rich in minerals, water and coal. The region is also an important corridor to the Pacific Coast.

Colombia’s problems are particularly concentrated in the verdant, mountainous department - issues that include drug smuggling, illegal mining, land theft and displacement. Paramilitary groups, drug smugglers and the usual criminals operate alongside far-left rebels. "And we are right in the middle,” says Idrobo.

National child welfare organizations, as well as the International Committee of the Red Cross and the United Nations, are noticing an uptick in the forced recruitment of minors across the country. They warn that regional conflicts are flaring up in many places and that all these groups are stepping in and exploiting the situation to go on recruitment offensives. The criminals and groups have a special focus on children and youth because they can use them as spies, couriers and fighters.

They have proven particularly vulnerable during the coronavirus pandemic.

Julia Castellanos of the Monitoring Center for Childhood and Armed Conflict (ONCA), a non-governmental organization based in Bogotà, says one of the culprits behind the disturbing trend is the current closure of schools, where teachers also act in part as social workers and help point out potential dangers to children. The schools also provide girls and boys with meals and daycare outside of teaching hours.

But during the COVID-19 lockdown, Castellanos says, young people have often been left to their own devices, at home and bored -- a situation the armed groups are keen to exploit. Castellanos’ monitoring center counted 128 cases of forced recruitment of children between January and April, more than twice as many as in all of last year. The true number is likely to be many times greater than that.

Many former FARC rebels are taking up arms again.

Although Colombia took a big step toward ending its over half-a-century-long civil war three-and-a-half years ago with its globally celebrated peace agreement with the Revolutionary Armed Forces of Colombia (FARC), the country's people are still waiting for peace.

The vacuum left behind by FARC’s demobilization and withdrawal hasn’t been filled by the state, as promised, but by other illegal groups, like the small National Liberation Army (ELN), paramilitaries or drug cartels.

Overall, there are a least a dozen armed groups fighting in the South American country for routes and territory that are used for narcotics and other goods. And they need constant new recruits. And then there are the former FARC rebels, who now call themselves the FARC dissidents, who are disappointed with the peace process and are once again taking up arms. Ombudsman Idrobo says it's this group that is calling the shots in Toribío.

Child welfare organizations in the other regions of Colombia are also reporting a new approach during the pandemic. In the department of Norte de Santander, on the border to Venezuela, the armed groups invite people on social media to parties, where they recruit boys and girls.

Grafitti reading "FARC-EP present" is seen on the door of a mechanical workshop on the road between El Palo and Toribío.

In the areas dominated by ELN guerrillas, including the southern department of Nariño, ELN uses 14-year-olds to secure the curfews and roadblocks imposed by the guerrillas in the fight against COVID-19.

According to political scientist David Santos, the children are much more than small fighters. "They fulfill many useful functions for the criminals, they can be shaped and influenced and they cost less than adults,” says Santos, who worked for several years as an adviser to the government of former President Juan Manuel Santos from 2010 to 2018 on the issue.

Santos says the forced recruits help in the camps, and that the girls are often victims of sexual exploitation. "The youngest, some of whom are recruited as young as eight, work as scouts or sell drugs at the schools.” He says that the guerillas wouldn’t give the youths weapons until they turn 16, but the drug cartels, for their part, train the boys to become killers and henchmen – for use in kidnappings, for example -- from a much younger age.

Miguel Ceballos, the Colombian government's peace commissioner, estimates that the armed groups have forcibly recruited around 14,000 girls and boys over the past 20 years. FARC was the main group behind it. At the moment, the ELN guerrillas and the FARC dissidents, as well as the drug cartel Clan de Golfo; have the most young people under their control.

Historically, children in Colombia have been treated as "objects to be used," explains Santos. It wasn't until the adoption of the Child Protection Act of 2006 that they were first recognized as subjects with their own rights. Those historic roots have made the problem particularly difficult to solve. Santos is critical of the current government. "Colombian President Iván Duque is once again pursuing war in the fight against the guerrillas," he says. "And it is the children who are suffering especially as a result."

Castellanos of the childhood monitoring center also believes the government has a duty. She argues that Colombia's underlying structural problems – poverty, a lack of social infrastructure in rural areas and poverty – must be solved. "They make the adolescents easy prey for the armed groups.” 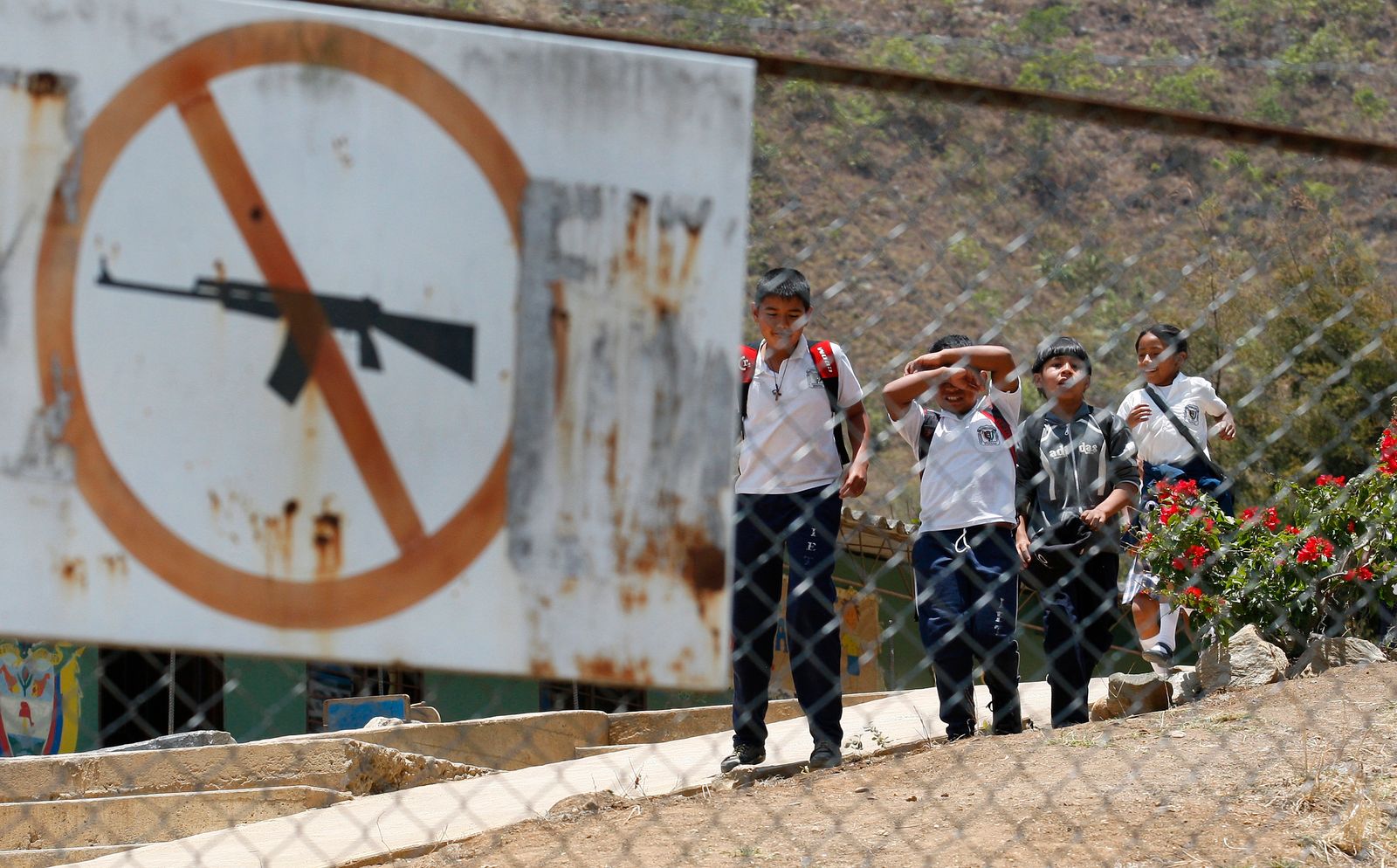 School children in Toribío, Colombia: Criminals in the country are increasingly recruiting children and young people 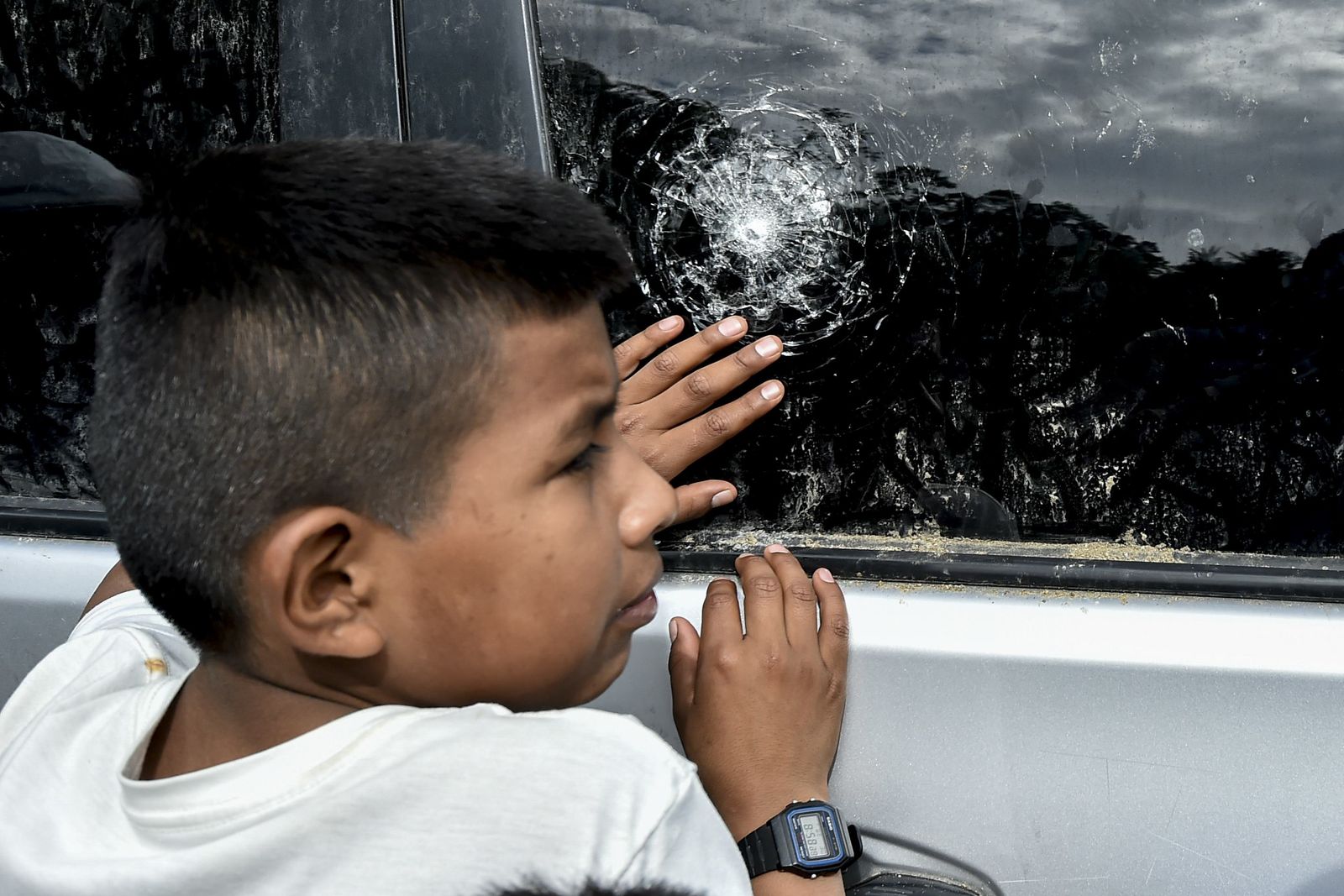 Regional conflicts are flaring up again in many regions in Colombia, and children are often exploited as fighters. 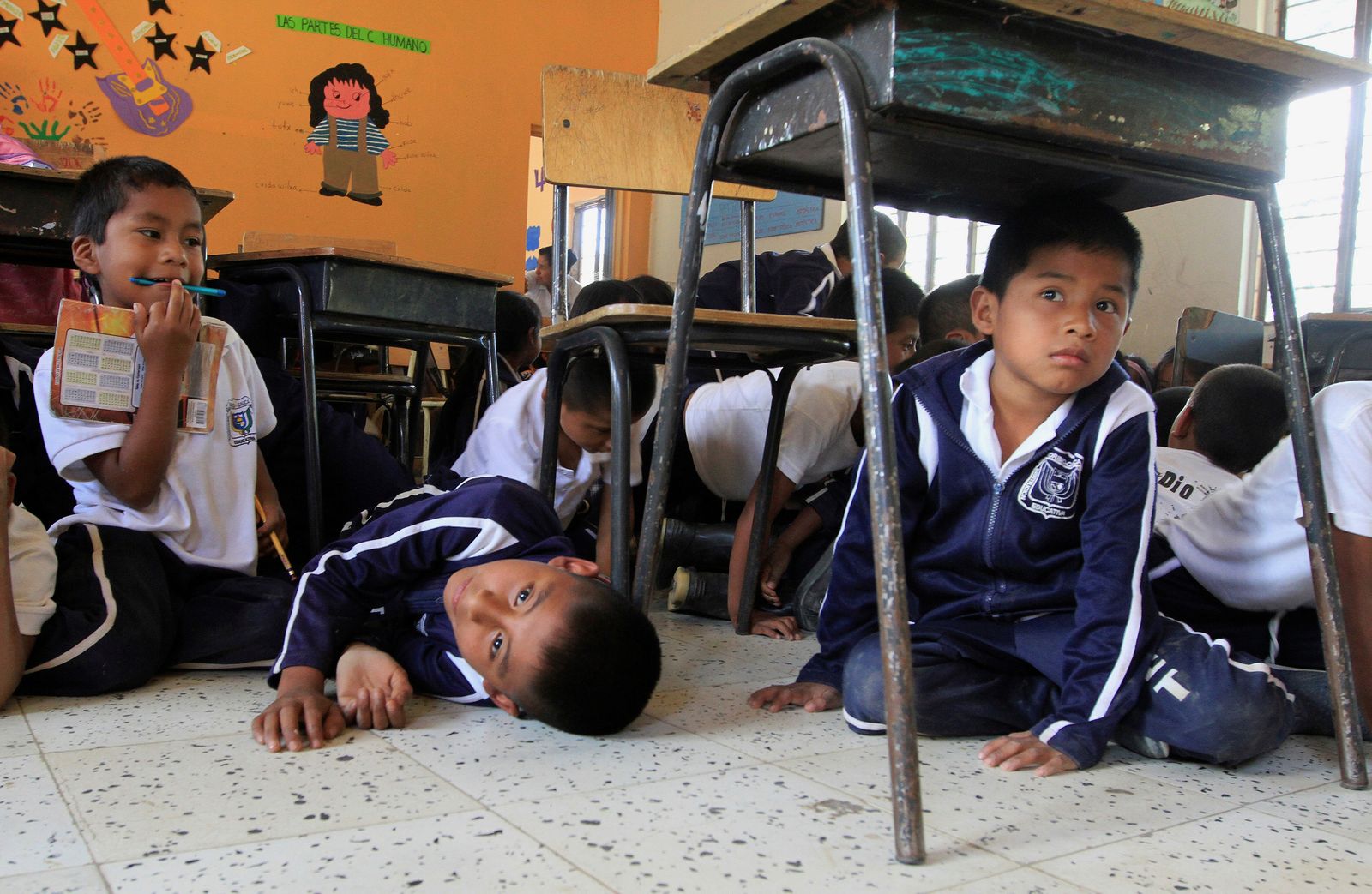 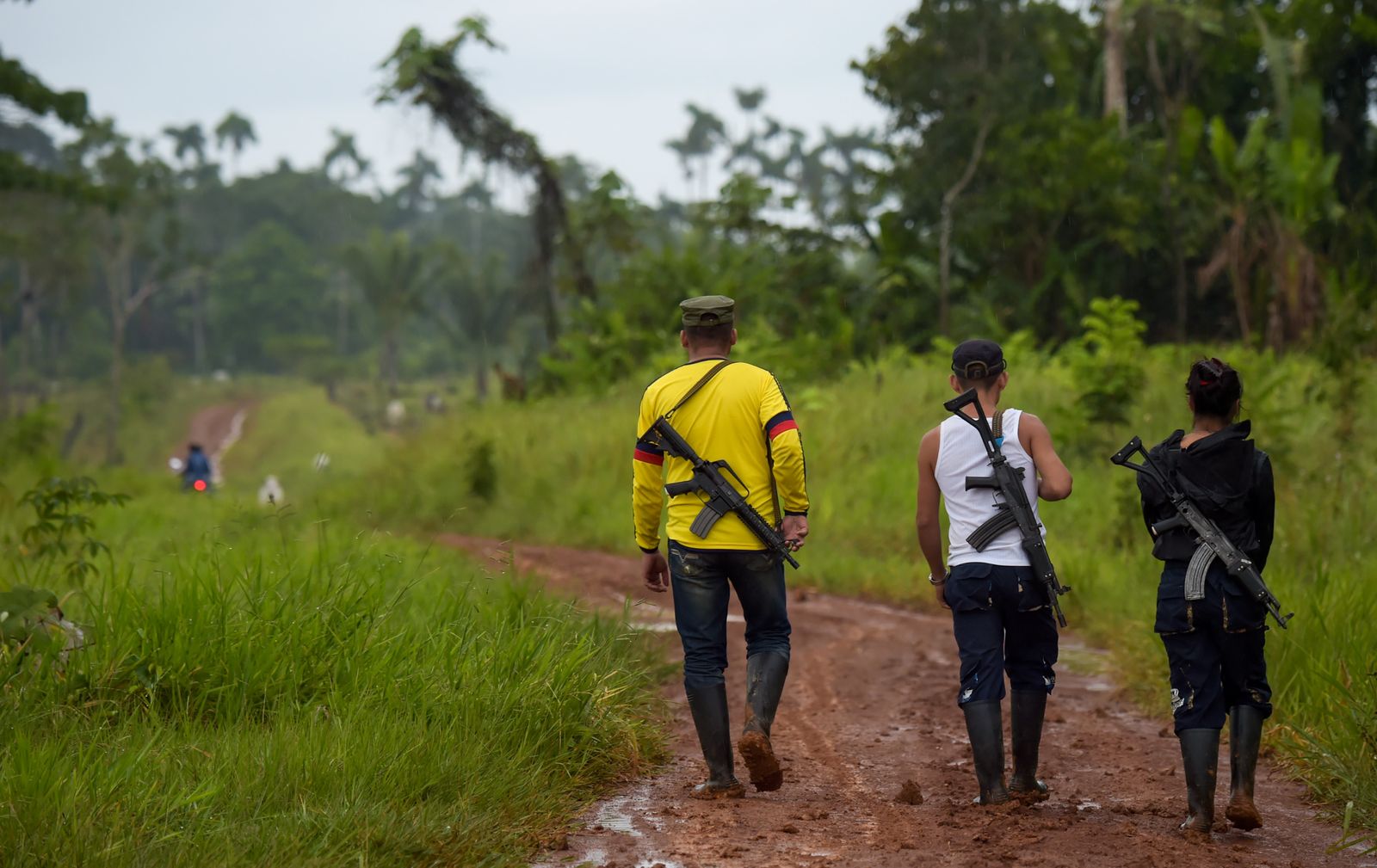 Many former FARC rebels are taking up arms again. 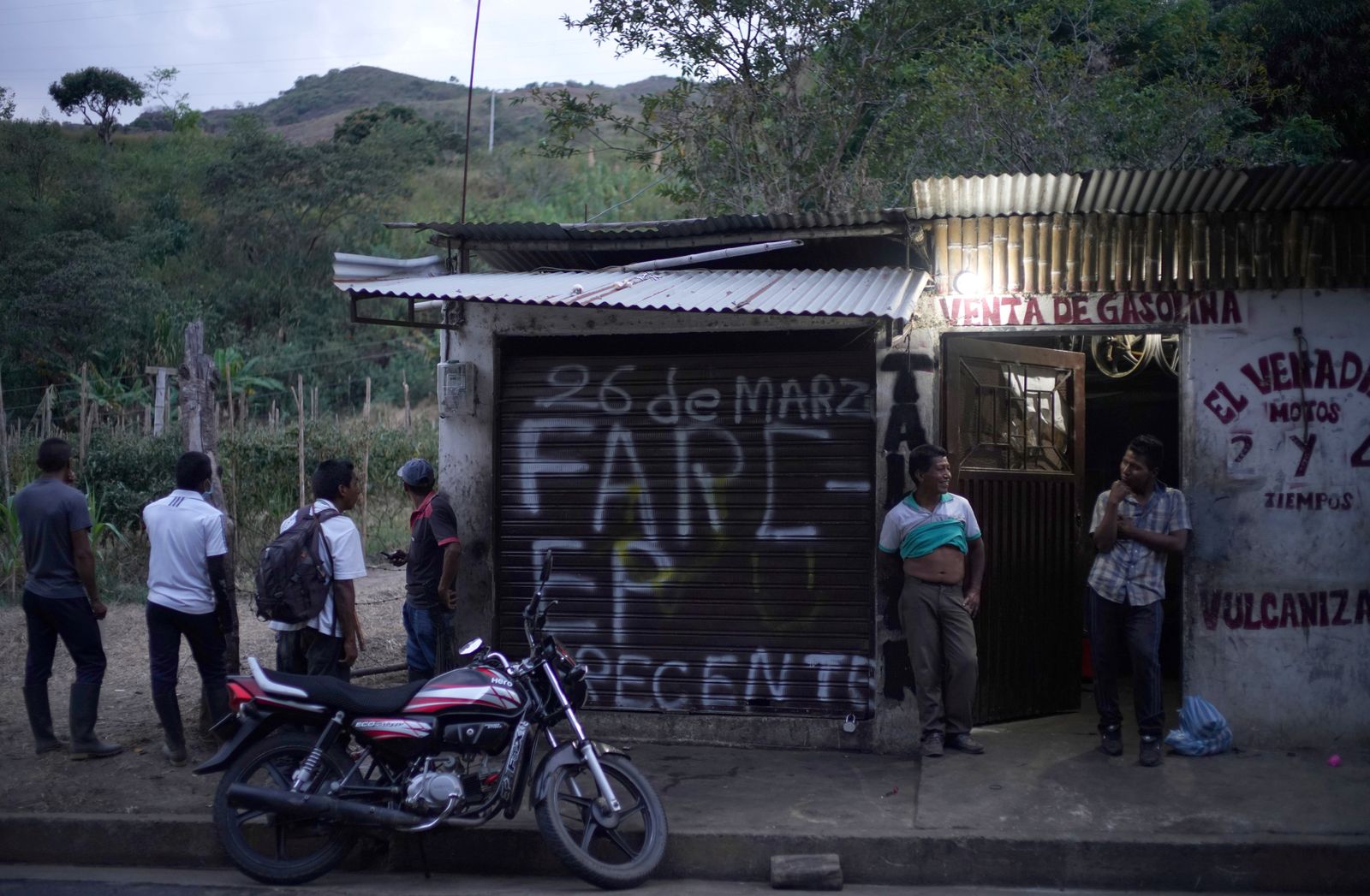 Grafitti reading "FARC-EP present" is seen on the door of a mechanical workshop on the road between El Palo and Toribío. 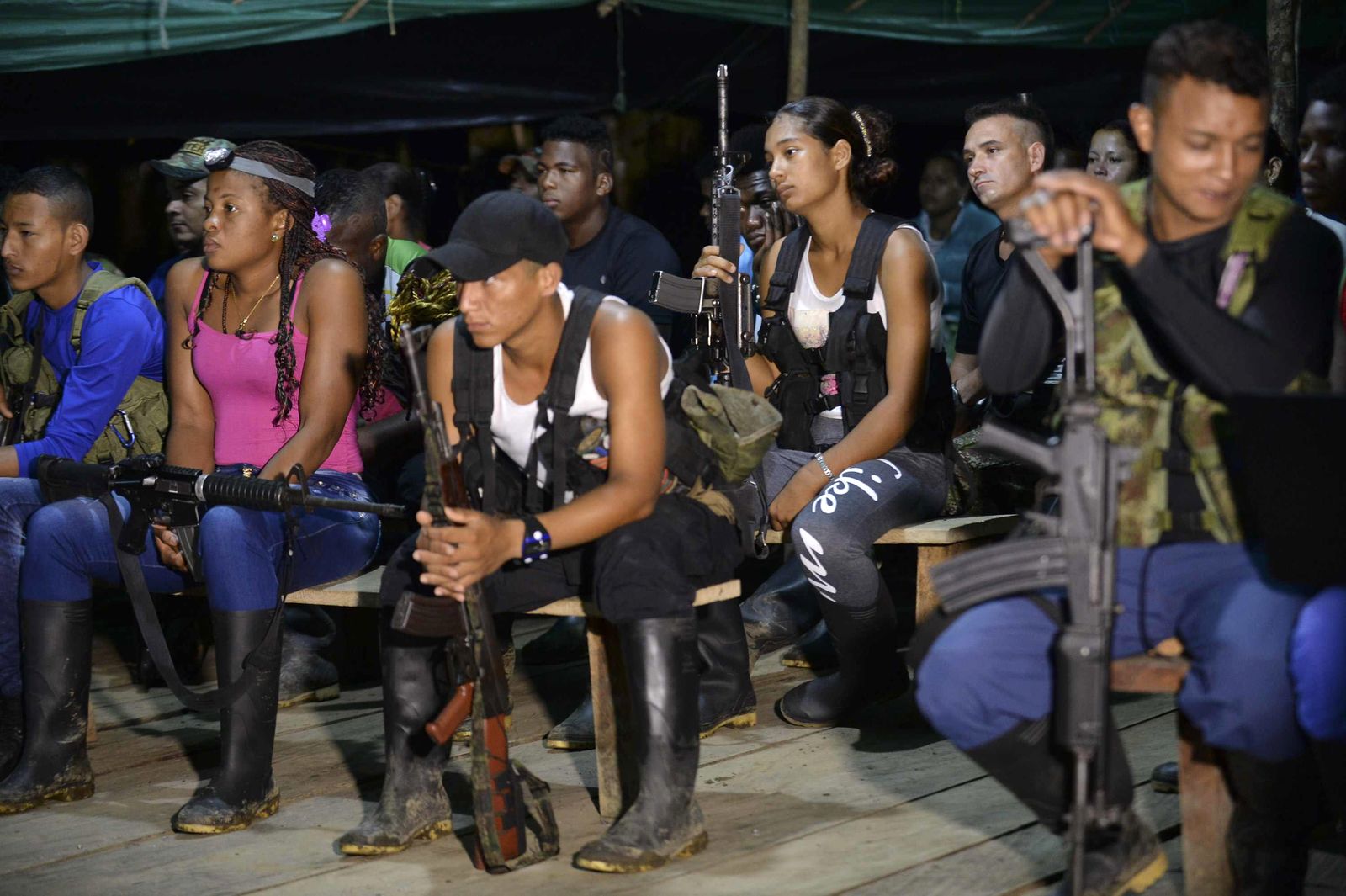