Cardiologist Fábio Vilas-Boas is actually a levelheaded man, a person who seldom loses his composure. After five years as the health minister of the poor state of Bahia in northeastern Brazil, he knows what it means to make do with lacking resources. "You can’t change the wind,” his Confucius-like Twitter bio reads, "but you can adjust your sails.”

The physician finally did run out of patience when he received an email on Wednesday of last week from a logistics company that was supposed to deliver him 600 Newport HT70 Plus ventilators. Vilas-Boas’ buyers had ordered the ventilators in early March from a manufacturer in China to fill a gap in supplies. The devices had made it as far as Miami, a stopover on their way to Brazil. But then their destination was apparently changed.

"Unfortunately, we are no longer allowed to export your devices,” the e-mail said. "In accordance with the Defense Production Act, we are being ordered to sell your order to the American government.”

Although it sounded cryptic, the message was clear. A few days earlier, U.S. President Donald Trump had implemented the Defense Production Act, an old wartime law that allows him to intervene in manufacturing chains in the interest of national security and, among other things, ban the export of crisis-related goods. This meant that Vilas-Boas lost his ventilators the moment they touched American soil in Miami.

"This is what the wilderness is like,” he says by phone.

Vilas-Boas, 53, isn't the only person observing the Americans’ business practices in disbelief. Luiz Henrique Mandetta, Brazil’s health minister, recently believed he had purchased, among other things, 200 million protective masks from a Chinese manufacturer. Then, this past week, 23 American cargo planes suddenly arrived in China and simply took away his goods. French and Canadian politicians also claim deliveries destined for their countries were redirected at the last minute.

The Law of the Jungle

As the virus runs rampant across the world, the numbers of protective masks, ventilators, reagents for coronavirus tests, clinical thermometers and medical protective equipment are running low, and a global hunt for critical resources has begun. This has led to the emergence of an overheated market in which many of the normal rules have been abandoned and replaced by what seems to be the law of the jungle. The World Trade Organization (WTO) saw it necessary this week to remind the international community that it needed to act in a "free, fair, non-discriminatory” manner.

A total of $597 billion (546 billion euros) in medical products were sold worldwide this past year. According to a WTO report, the 10 countries in the world with the strongest purchasing power made three quarters of these deals. Although up-to-date numbers do not yet exist, there are few doubts that this concentration has increased during the first three months of this year.

Women sew masks at a textiles factory in Iran

Welber Barral, a lawyer who has been arbitrating economic disputes for the WTO since the 1990s, has argued that if the health-care systems in poorer countries collapse, this purchasing inequality could set off a global crisis of confidence. American political scientists Abraham Newsman and Henry Farrell wrote in the Harvard Business Review that if this lack of international solidarity causes too many people to die, it could set off a "spiral of fear and retaliation” that will deepen global conflicts.

Last week, Mandetta, the Brazilian health minister, said that a collapse can also mean having the money to pay for something but then not receiving the product.

Eat or be eaten. That’s what 2020’s corona capitalism is about. It's not only the United States that has imposed export bans on medical products, either. Sixty other countries have also limited exports. Many governments have pushed their automobile or armaments manufacturers to build production lines for medical equipment, but the factories are not keeping up with the demand. To satisfy the need, they have to buy products in China, by far the largest producer of globally available goods.

"It is a difficult, complex market,” says Vilas-Boas, the health minister from Bahia. Vilas-Boas started expanding his procurement department at the beginning of the year, and it now has 60 employees. They are competing with the professional buyers of the U.S. government, and with governors, mayors, embassies and hospitals around the world. The government in Berlin has asked well-connected German companies operating in China like BASF, Volkswagen and the mail order company Otto to act as intermediaries for the purchase of goods there. Middlemen with trucks and suitcases full of money are traveling across China, visiting factories that until recently made iPhones or computer hard-drives.

The number of mask manufacturers alone has almost doubled since early February to 7,000. Their output has even increased by a factor of almost 12 during this period, but even that isn’t enough.

Vilas-Boas claims that agents working for rich countries have repeatedly pushed Chinese manufacturers to cancel contracts that have already been signed and offer to take over payment of penalty fees arising from the cancellations. He says he has also heard about companies that have cancelled contracts themselves because the prices of their products exploded so dramatically in the span of a few days that they stood to make greater profits if they simply paid the penalties for the cancellations.

Vilas-Boas says it’s possible that the latter is also true of his intercepted delivery, and that the suppliers merely used Trump’s export ban as a pretext to sell his ventilators to New York at a higher price. He says his research had suggested something along those lines.

The same is of true of masks, products that are usually sold for cents but now go for $7 or $8 each, and the infrared clinical thermometers, which cost the equivalent of $30 in Brazil in December, but now are sold for $125.

Vilas-Boas argues that, in his case, it’s less the price that’s the problem than the fact that almost all Chinese manufacturers require him to pay everything up front when a contract is signed. "Anyone who doesn’t immediately transfer the full amount basically doesn't stand a chance.”

A Time for Swindlers

This can cause problems for a government authority, especially when it has to deal with a supplier it doesn’t know, and when there are no contacts and no time to evaluate them. There are stories circulating in many places of desperate mayors who signed contracts with businessmen for protective masks for obscene amounts, only to later discover the delivered masks were made not of polypropylene but of something only slightly better than toilet paper.

"Swindlers thrive in times like these," says Nicolas Duchenne, the head of logistics for S.A. Healthcare, a South African company that has been supplying the country with medical equipment for over 20 years. He says he has experienced a lot in his sector, but that the market has never been as crazy as it is now.

Duchenne is waiting for a delivery of 400,000 protective masks from China. When he ordered them two months ago, he thought he had acted with foresight. The virus seemed to be far away, but now the supply and delivery chains are stuttering. He says that because of the enormous numbers of items bought by the Americans and the Europeans, the Chinese are running out of raw material. On top of this, he argues, goods are often stuck for weeks in airports because planes’ cargo holds are full.

The production of masks in Russia

"It is complicated to assert oneself as an African player in this market,” says Duchenne. "Transport costs rise with each day, and there are fewer planes in the sky with each passing day."

He says that poorer countries are suffering less from their weak purchasing power than from the fact that they are not in a position to make threats. It is hard to imagine the president of Malawi, for instance, gaining "direct access” to high-value protective equipment by having a phone conversation with the Chinese president, as Angela Merkel recently did. Or him summoning an "airlift” of goods from Shanghai, as Lufthansa recently organized with its unused passenger aircraft.

Duchenne experienced this firsthand himself a few weeks ago, when a manufacturer informed him that a delivery was cancelled. The situation in Italy and Spain, he was told, was so grim that the order had to be redirected. "A diplomatic intervention,” says Duchenne. In other words, Beijing had confiscated the goods that were destined for him for political reasons.

The Chinese government is arguably an additional competitor.  It is acquiring a considerable number of masks, testing kits and ventilators every day that it donates to distressed countries as humanitarian aid. Since the start of this year, China has offered support to 83 countries, albeit not entirely altruistically. In Africa and South America, this form of mask diplomacy could serve to secure dwindling raw materials. In Europe, it’s about presenting itself as a reliable partner in a difficult time.

The problem for the Chinese is that their charitable crusade is increasingly being revealed to be a PR move. What does it help if China donates 90,000 masks to a city like São Paolo while the 200 million masks ordered by the Brazilian health minister from a private Chinese company don’t arrive?

The production of masks in Kenya

Matt Ferchen, who studies the relationship between China and the global south at the China-focused Berlin think tank Merics, believes that it could even set off a counter reaction if only low-quality goods remain for developing and emerging nations. He argues that it’s feasible Brazil could rethink energy-infrastructure contracts that were recently awarded in favor of China.

Now leaders in Beijing have seemingly understood that the complaints about the cancellation of deliveries and the poor quality of the goods are damaging the country’s reputation. On Wednesday, the Trade Ministry decreed that every private manufacturer of protective masks would now be required to have a manufacturing license. From now on, only manufacturers that meet the quality standards of the target country will be allowed to export their products.

It is a first step in an effort to win back control over a chaotic market. Presumably, not much will change. "When the great wave of deaths begins,” says Duchenne, the South African importer, "governments like mine will face the question of what price tag they should attach to a life.”

It’s unclear who will pull us out of the muck if the market doesn’t fix the situation. In contrast to 2009, after the collapse of Lehman Brothers, when the G-20 states decided not to implement protective measures on their economies, the U.S. and many Europeans are barely looking beyond their borders amidst this crisis.

Vilas-Boas, the health minister from Bahia, is now waiting for a new delivery from China. This time, the ventilators are supposed to arrive via Buenos Aires, not Miami. At some point, the millions he had to pay to secure the delivery will leave a gap elsewhere in his budget. Eventually, he says, people need to discuss the fact that the goods that are currently dictating life and death are basically only being manufactured by one country. But he also believes that this isn't the time for that. At the moment, his priority is a video that he posted on his Twitter feed. It explains how people can sew their own masks at home. 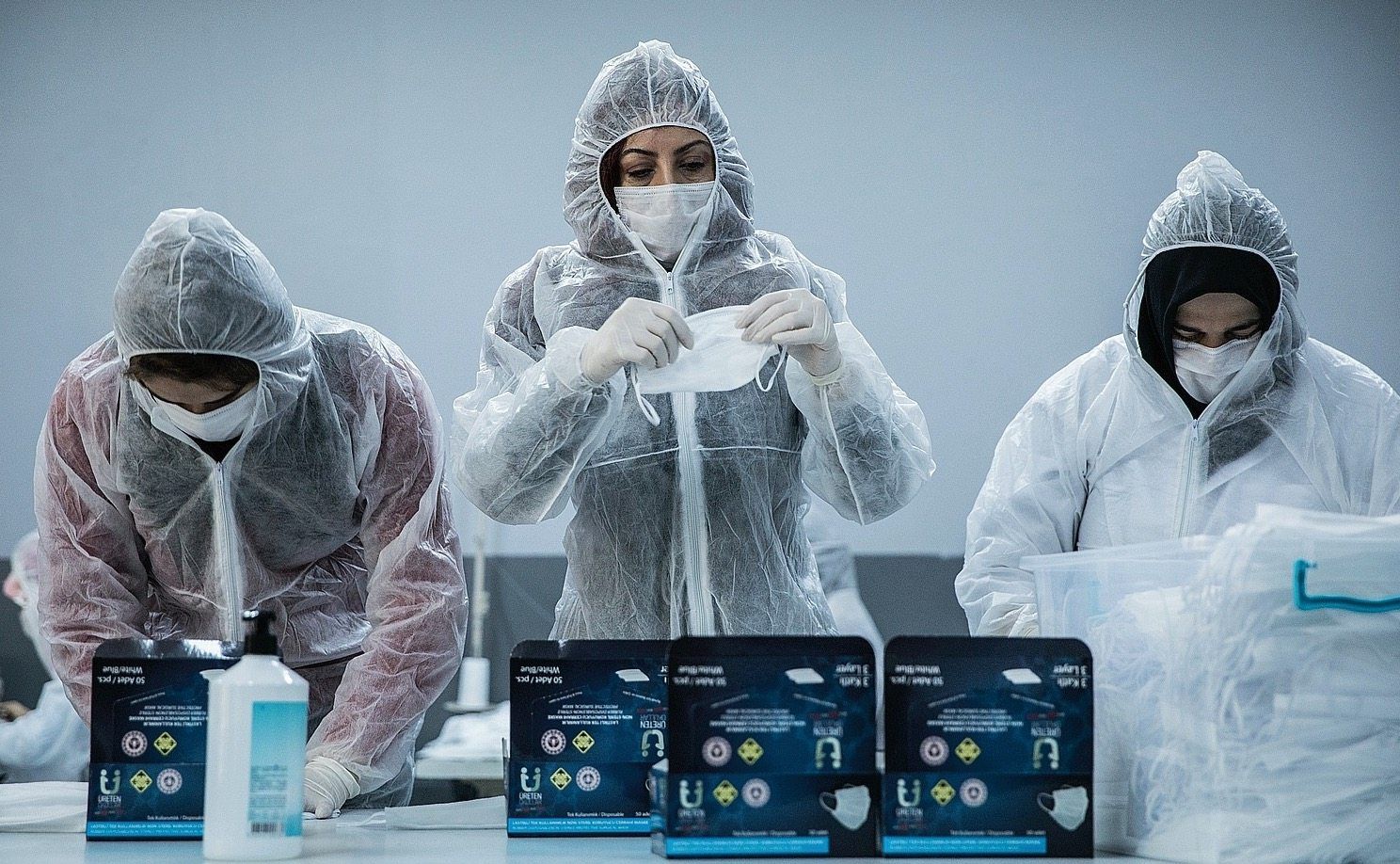 The production of protective masks in Turkey: Corona capitalism is not painting a positive picture of rich countries. 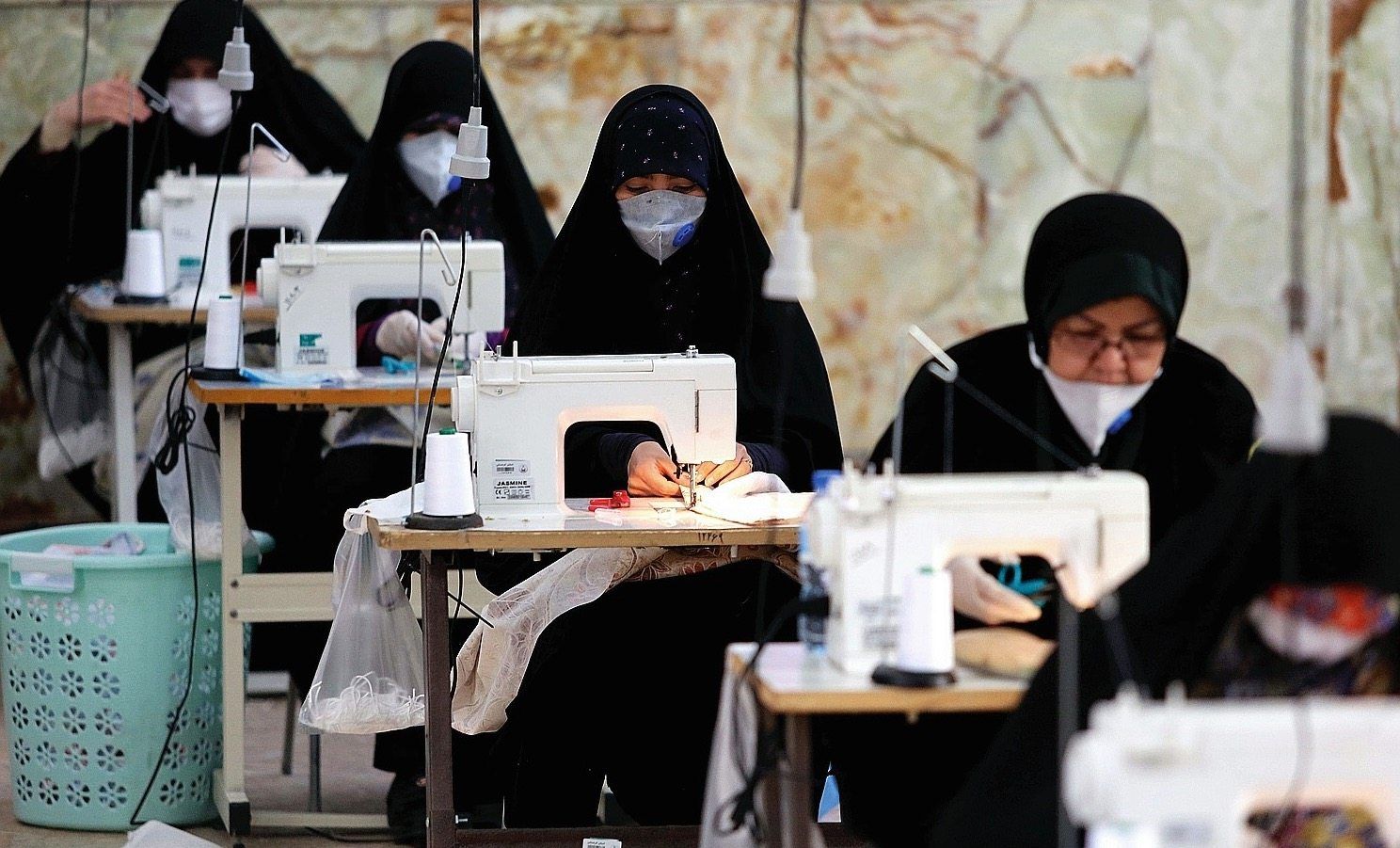 Women sew masks at a textiles factory in Iran 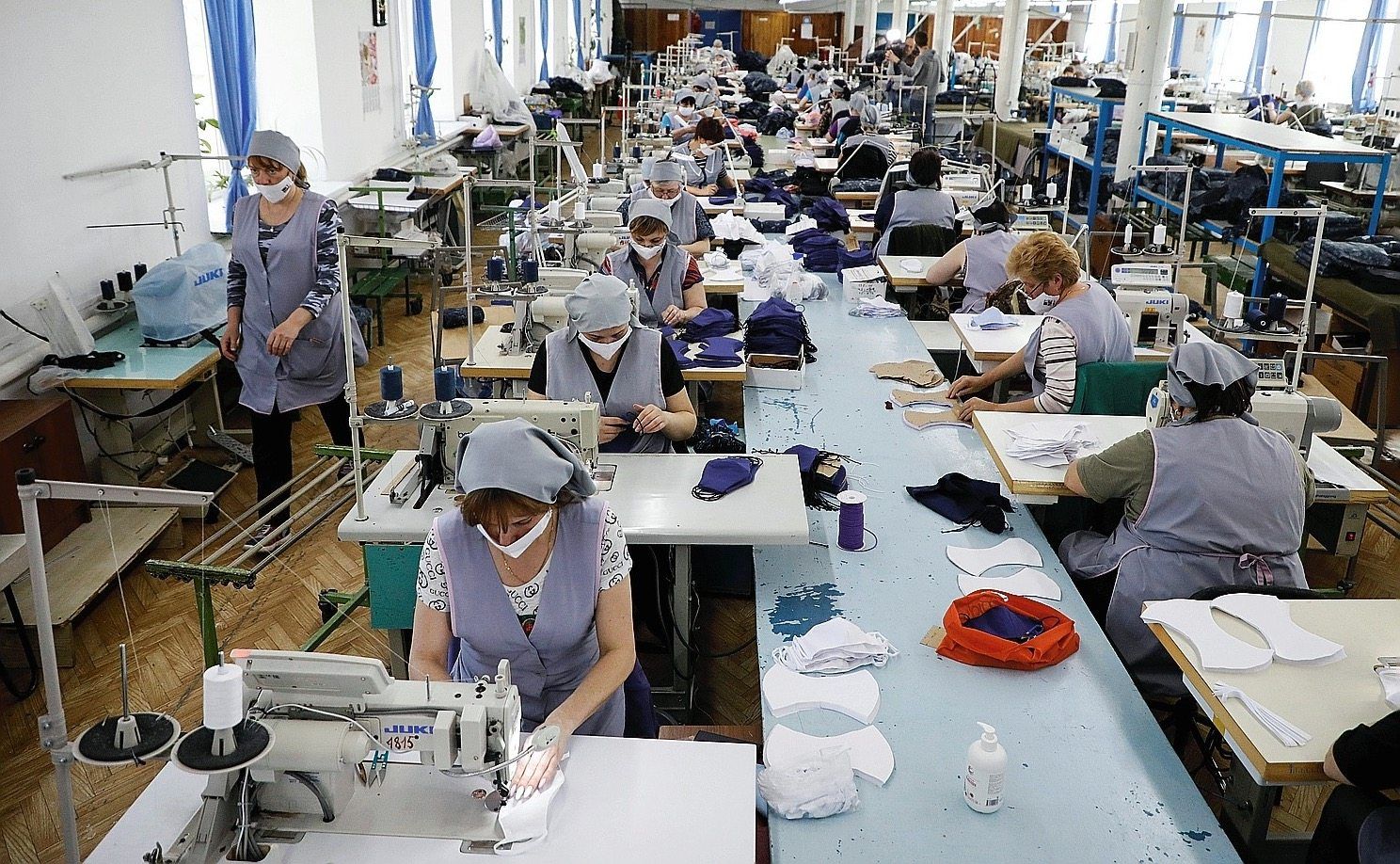 The production of masks in Russia 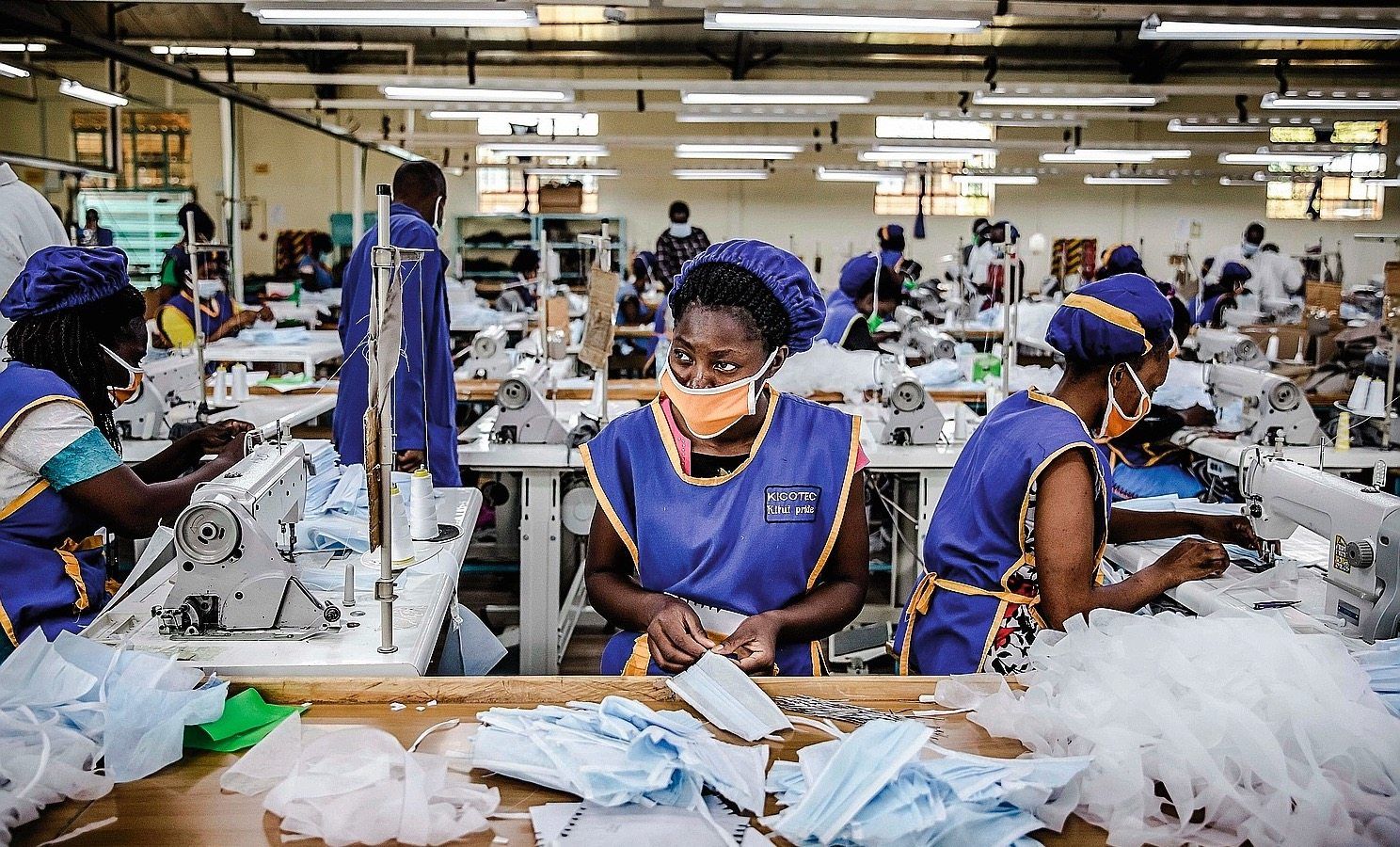 The production of masks in Kenya 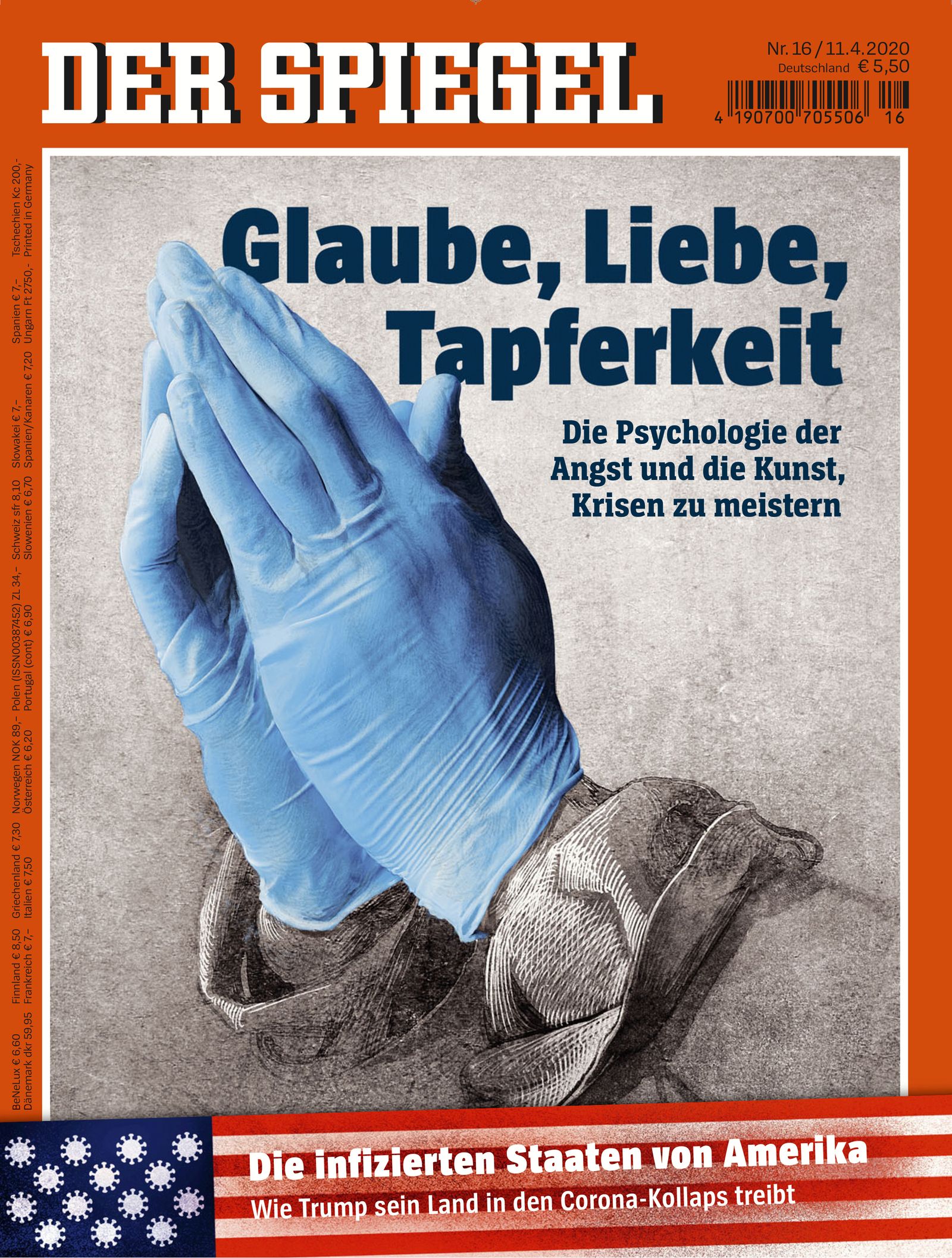