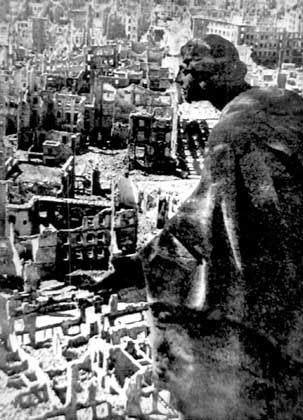 A symbol of destruction: Dresden after the firestorm.

At a meeting of parliament in the eastern German state of Saxony on Jan. 21, politicians wanted to debate the best way of commemorating the victims of the decimation of Dresden by Allied bombers on Feb. 13, 1945. What parliament got instead was one of the most embarrassing outbursts yet from a right-wing, neo-Nazi party whose leader calls for the creation of a new German "Reich."

As the parliament held a one-minute moment of silence in memory of the victims of National Socialism and World War II, 12 members of the National Democratic Party (NPD) demonstratively walked out of the chamber. Later, they declared they would only commemorate victims killed during the bombing of German cities. In the subsequent debate, the NPD's Juergen Gansel described the British Royal Air Force-led attack on the city as "mass murder," calling it Dresden's Holocaust of bombs."

"Today we in this parliament are taking up the political battle for historical truth, and against the servitude of guilt of the German people," he told the outraged parliament.

The NPD's political antics have fueled a major national debate across Germany, where sensitivities are still strong about how the bombing should be interpreted. The spectacular firestorm caused by the carpet bombing left Dresden, long known as "Florence on the Elbe" because of its splendid Baroque architecture, in ruins, officially killing at least 30,000 people. The exact number will always be the subject of great debate and some estimates count tens of thousands more deaths. There is no doubt that the horror was a tragedy of terrible dimensions, but was it an act of vengeance on the part of the British and Americans for the Nazi bombings of Britain or was the decision to attack born out of the perception of military necessity?

One prominent argument is that it was a needless act on the part of the British at a point when the Germans were retreating on many fronts and the Russians had already crossed the Oder River into Germany. The other, most recently proffered by British historian Frederick Taylor is that the Allies saw in Dresden an important communications and transportation hub from which supplies and troops were being sent to the eastern front, where the Soviet Army was suffering heavy troop losses. The latter, one could argue, would make Dresden a legitimate military target. Residents of Dresden, indeed, across Germany, remain divided between these theses as the 60th anniversary of the Dresden firebombing approaches.

To complicate matters, for decades, the Communist government of East Germany routinely portrayed the bombings as a campaign of "Anglo-American terror." The NPD has capitalized on this rhetorical tradition that finds traction in some quarters.

"The phrase 'Holocaust of bombs' falls on fertile ground with many Dresdeners," said Stephan Fritz, the reverend of the recently reconstructed Church of our Lady (Frauenkirche), whose ruins long served as a symbol of the destruction of Dresden. "One shouldn't have any illusions."

British historian Taylor himself encountered that ground during a recent appearance in the city. Though his book "Dresden," published last year, in no way directly attempts to justify the attack, he is still the target of considerable anger in the city -- so much so, that he had to have police protection when he appeared at the city hall event. Dresden's mayor, Ingolf Rossberg, said he knew his appearance would be a delicate matter but that he had allowed him to hold the event because "uncomfortable truths must also be given their place in democracy." Try telling that to the mass circulation Bild newspaper, which led a campaign against the "scandal author," and solicited locals to express their outrage in letters to the paper.

Perhaps most disturbingly, the NPD's stab at historical revisionism, by directly comparing the conventional bomb attack with industrialized genocide, has found greater resonance than one might expect. A poll by the Welt am Sonntag newspaper found that 27 percent of Germans under 30 found the term to be acceptable. Among the 60-plus crowd, 15 percent found it okay to call the attack "Dresden's Holocaust of bombs."

Those are exactly the kind of voices that embolden the extremist NPD, which entered the Saxony parliament after garnering 9.2 percent of the vote in state elections in September. The party has long propagated the idea that Dresden is a city of German victims, and for five years it has helped pour gas on the flames of a symbolic battle over the history of the Saxon capital. Every year, the number of people participating in the NPD-organized "funeral march" to commemorate the bombing grows -- in 2004 close to a thousand young men showed up, and this year 5,000 sympathizers from across the country are expected.

Though that's a fraction of a fraction in a country of 82 million, it has nevertheless brought the historical debate close to the boiling point. That's why the organizers of the memorial events are working hard to dissipate the dark cloud cast by the NPD. Some state politicians have also sought to marginalize the neo-Nazi party, whose basic platforms involve keeping foreigners out. 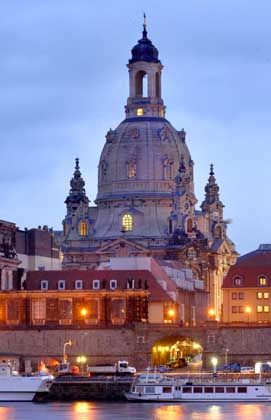 After a decade of reconstruction, Dresden's Church of our Lady, which lay in ruin for more than a generation, it is now nearing completion.

Three months ago, Julia Bonks, the youngest member of the state parliament and a member of the leftist Party of Democratic Socialism, showed up to work in a t-shirt that read "Life's better without Nazis." At least 86 newspapers ran the photo. But months later, her action has done little to stop the men German Chancellor Gerhard Schroeder has dubbed "the hopeless neo-Nazis." His description is hardly a stretch for a party whose national leader, Udo Voigt, recently thanked officials for constructing Berlin's new Holocaust memorial, which he described as "the foundation for the chancellery of the new German Reich."

Voigt's are the kind of polemical statements that horrify the broad coalition of groups that are planning the 60th anniversary events in Dresden right now. For the Feb. 13 memorial, the group has asked Dresden residents to pin white roses to their shirts as a visual protest against the planned right-wing extremist march. They will also carry candles so that, when they come together in front of the city's famous Semper Opera building, they will form the shape of a giant candle to be captured by the TV helicopters hovering above. Fritz promises it will be a grand gesture by "Dresden's champions of democracy."

"The Nazis are attempting to exploit the day, but we're not going to allow them to," said Rev. Fritz. As Fritz notes, there's a cardinal rule in Dresden when it comes to remembering the war: Those who speak of Dresden's suffering also must not deny Germany's guilt. "Dresden was not an innocent city, it was a Nazi city like all the others," the reverend said. He believes the vast majority of the city's residents share his sentiments.

One thing is certain: the NPD is doing all it can to promote as many myths about the bombing of Dresden and Germany's responsibility for the war as it can. In the state parliament, the party now has a powerful podium from which it can get its message out to many. Rev. Fritz believes the commotion it caused a fortnight ago "was really a calculated coup in order to mobilize its own ranks and to address other groups." With its funeral march on Feb. 13, the order of the day will be drawing as much attention as it possibly can. Unfortunately, a lot of that attention will come from abroad.

With reporting by Carsten Volkery in Dresden