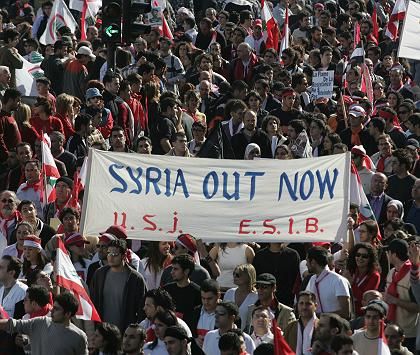 Suleiman Franjieh stood among the hundreds of mourners gathered in front of Beirut's city palace to pay his final respects to Rafik Hariri, the former prime minister of Lebanon who was killed by a bomb on Feb 14. The interior minister's presence made many uneasy, since it is his ministry that is overseeing the investigation into Hariri's assassination. Before coming, he asked a friend which members of Hariri's family would be willing to accept his condolences.

"We don't just talk to anyone," Hariri's oldest son, Baha al-Din, informed him, in a frosty rebuff of the government. Al-Din, his mother Bernadette and his siblings are the heirs to the legacy of a billionaire tycoon who became a potent symbol of a Lebanon that had rebuilt itself out of the rubble of a bloody 15-year civil war. Hariri left office last October and shock over his sudden and violent death sent tremors across the country and actually managed to pull together the nation's different ethnic groups. Though his popularity was far from universal, in death Hariri brought together Sunni and Shiite Muslims as well as the country's Christian and Druze minorities. It was a noteworthy development given that the four religious denominations had fought bloodily during the country's civil war until it ended in 1990. Now, Hariri's fellow Muslims are praying for him in the mosques as the bells of mourning ring out in the towers of Lebanon's Christian churches.

For the past 10 days, a new question has threatened to divide the country -- namely, what Lebanon's future relationship with Damascus should be. Should Syrian troops continue to occupy Lebanon and should Beirut continue to maintain its close alliance with its neighbor? Opinions are sharply divided and the question is one that goes to the heart of the country's destiny. And the outcome of the investigation of Hariri's murder could sway emotions as Lebanese contemplate their future ties with Syria.

The governments in both Beirut and Damascus have denied any role in the assassination of Hariri, an influential opponent of Syrian influence. And so far, at least, no evidence has emerged implicating either. The question of whether it was a suicide bomber who attacked Hariri's motorcade or if was a bomb planted in the sewer system that caused the former prime minister's untimely death remains wide open. The former could point to the work of a militant Islamist, observers say, and the latter to conspiracy among Syrian intelligence agents.

Any evidence linking jihadists to the crime would likely exonerate the Syrians, and many in the government in Beirut, which counts among its ranks some of Syria's most loyal followers, have promoted this theory.

Regardless of the outcome of the investigations, Lebanon's future could belong to Syria's opponents. "Syria out, Syria out," mourners chanted as they followed Hariri's coffin to the Mohammed al-Amin Mosque, an opulent house of worship Hariri helped build with his own fortune.

In the days since Hariri's death, an alliance has formed against the government in Beirut and its protecting power in Damascus that stretches far beyond Lebanon's borders. The United States, which long ago declared Syria a "rogue" state, is also ratcheting up its pressure on Damascus. The Syrian regime, US Secretary of State Condoleezza Rice asserted last week, is at least indirectly responsible for the assassination. Last Tuesday, she recalled the US ambassador to Damascus, and the following day Washington's Middle East special envoy, William Burns, told the government in Beirut that Washington would continue to insist that Syria withdraw all of its troops from Lebanon as specified in UN Resolution 1559, which was passed in 2004.

The UN is supporting the US's hardline stance against Syria and it is demanding an international investigation of Hariri's murder; several Arab states have sent emissaries to Damascus and Beirut to push for a disentangling of the Syrian-Lebanese clique.

France, a former colonial power and erstwhile protective force for Lebanon, is -- unlike in the Iraq war -- standing firmly by Washington's side on the issue. Shortly after his burial, French President Jacques Chirac met with Hariri's wife Bernadette in Beirut. Lebanese President Emile Lahoud didn't dare meet with Chirac personally. Instead, Hariri's son Aiman received the distinguished guest. The situation underscored the tensions between the countries. A friend of Lahoud, who is becoming increasingly isolated by the international community, said the president fears for his own survival -- not only politically, but also psychologically.

United by the fear of sanctions

With mounting international pressure over Syria's far-reaching tentacles in Lebanon, Syrian Prime Minister Naji al-Otari, who arrived in Tehran just after Hariri's murder, said his country would form a "united front" with Iran. Both countries are in Washington's scope and fear they could ultimately be subjected to United Nations sanctions -- Syria for its occupying force in Lebanon and Iran for its alleged nuclear weapons program. Iranian Vice President Mohammed Resa Aref said Tehran would share its expertise with Damascus in dealing with the Americans.

The current political tempest began back in August, when Syria pressured Lebanon to modify its constitution so that Lahoud could extend his term by another three years -- otherwise it would have expired in September. The move angered Hariri and he subsequently resigned in October. Until then, Hariri had been a moderate opponent of Syria's deeply entrenched presence in Lebanon, but the development so angered him that he leant his weight to the Lebanese opposition. In the coming elections planned in Lebanon for May, political analysts believe Hariri would have carried an overwhelming victory and that Damascus' puppet regime would have fallen, once and for all.

That, say Syria's opponents, would be an obvious motive for Hariri's assassination. Many speculate the act was ordered by Damascus and possibly carried out by its secret service or by killers commissioned by Syria. When interviewed by the BBC on the day of the slaying, Syria's ambassador to London was asked, bluntly: "Did you do it?" -- a line of direct questioning that pretty much reflected the immediate sentiment of the international community. Fearing Syria's stability could go the way of the dodo bird, President Assad on Friday appointed his brother-in-law, Brig. Gen. Asef Shawkat, as the new chief of the country's domestic and foreign intelligence services including those in Lebanon. The move will help Assad consolidate power over his security forces. 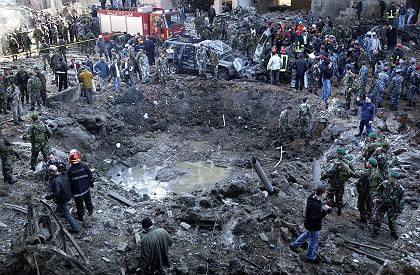 Workers and soldiers stand around a massive crater after a bomb attack that tore through the motorcade of former Prime Minister Rafik Hariri in Beirut, Lebanon, on Feb. 14.

For a some time now, Damascus has pursued a "strategy of decapitation" in Lebanon, journalist Tueni said. Anyone who has the muster to become an independent leader is eliminated. But like the former Baath regime just over the mountains from Syria, trouble could soon strike Damascus. After all, Saddam Hussein and his Baathist supporters were so drunk with power that they failed to see the storm brewing over them.

"We're standing before dangerous times," says a worried Radwan al-Sayed, a former confidante and speechwriter of Hariri. The withdrawal of the approximately 14,000 Syrian troops still based in Lebanon has become inevitable following the murder -- and it would be a step in the right direction. "By May 1, the Syrians will be out, the Lebanese will take care of that," Druze leader Walid Jumblat told DER SPIEGEL. "Even if the Syrians send in their tanks, this chapter is closed." Signs are increasing that Damascus will pull out. On Thursday, Syria said it was committed to a full withdrawal of its troops, as agreed in the 1989 Taif Accord, but as in the past, it did not give any time frame for when the last soldiers would leave. Syria first sent troops into Lebanon in 1976, just after civil war broke out in the country.

Syria's legacy will be difficult to erase

Even if all the troops depart, problems relating to Syria's legacy in Lebanon will persist. Syrians who have deeply entrenched themselves in the Lebanese state apparatus and business community will not give up their powerful positions in Lebanon voluntarily. "There's too much power and money at stake for them," explained Hariri confidante Sayed.

For economically depressed Syria, the resurrection of Lebanon's industries -- like the multibillion dollar reconstruction of Beirut's port and the energy and banking sectors -- is an important source of revenue. But the large presence of Syrians and the fortunes they are amassing from Beirut's former misfortune irritate many Lebanese. They are led by the political opposition, who see their neighbors as resource leeches, or "blood suckers." Syria's opponents now see themselves strengthened by the international coalition and are making it their goal to reclaim Lebanese resources for the Lebanese. The small country desperately needs them -- it has close to $35 billion in debt, close to double the country's gross domestic product. Indeed, that situation is exascerbated by the fact that Hariri, with his personal fortune, served until his death as the sole guaranty for many foreign investors.

Hariri's son Baha al-Din, himself a successful businessman, has his own political ambitions -- and many in Beirut believe he would like to succeed his father. But even his closest followers doubt that he possesses much of his father's political and business savvy. And those are assets that may be badly needed to help keep the rich Gulf Arabs who have invested billions in Lebanon since the civil war ended on board.

Many here are looking to another man in the hopes of improving their future prospects. Saudi-Lebanese multibillionaire Prince Alwaleed Bin Talal, who also attended Hariri's funeral last week, is the grandson of a former Lebanese prime minister and holds dual Saudi and Lebanese citizenship. Some business people in Beirut would like nothing better than if the Prince took power himself.

At the very least, they argue, he could secure the country's economic survival.