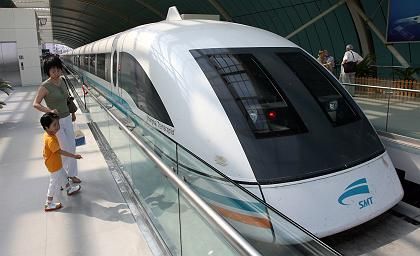 In China, local residents are rarely consulted when it comes to big construction projects. While Beijing's "urban makeover" for the 2008 Olympics has already led to the demolition of thousands of homes, Shanghai is now plannig to evict thousands of families in order to make way for the extension of the Transrapid magnetic levitation (maglev) track. This time, however, the affected residents are not going quietly.

A group of Shanghai residents has written to the German Chancellor Angela Merkel to ask for her support in their fight to stop the extension of the maglev train line. While some of them are worried about finding somewhere to live in time and how they will be compensated, those who are not being moved are concerned about noise, magnetic waves and possible accidents. The trains for the line are built by Transrapid International, a consortium of the German companies Siemens and ThyseenKrupp. The high-speed trains zip along at 430 kilometers an hour along elevated tracks.

In a letter quoted in the German newspaper Tagesspiegel, the residents write: "The Transrapid project is curtailing the human rights of Shanghai residents, because the rights to health and existence are being ignored." More than 1,000 inhabitants of the Tianyizou housing development in the Pudong district support the appeal, its authors told the newspaper. They are concerned about their health and security, as the safety distance between the houses and the maglev line extension has been set at only 22.5 meters -- much narrower than the current Transrapid track. And the residents claim that there has been little notice or information about compensation given to those who are to be evicted.

The current maglev line is 30 kilometers long and links the Pudong financial district with Shanghai's international airport. The new 37-kilometer extension is scheduled to be completed by 2009 and will connect to the domestic Hongqiao airport and pass the World Expo 2010 grounds.

Although the contracts with the Transrapid consortium have not even been signed yet, the Chinese government is starting to make significant preparations for the extended track. In many neighborhoods thousands of families have been told they have to move by May.

Those along the route who are not being forced to leave their homes fear for their health and are concerened about the loss of value of their homes. "You know perhaps more than us about the noise caused by the Transrapid and the damage caused by the electronic magnetic field," says the letter to Merkel. "We hope with all our heart that you can help us and all those who live along the Transrapid line."

There have already been protests against the track extension on the Internet -- on one anti-Transrapid Web site (mostly in Chinese) and forums, which demand that the safety of the residents should not be ignored: "If there is more noise from the Transrapid: How can we live there?" goes one post. There is widespread frustration at the lack of public information about the project. One resident told the dpa agency: "The government isnt telling us what its plans are."