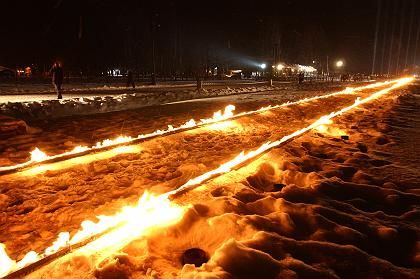 The railway tracks of the Auschwitz concentration camp are illuminated with fire in memory of the victims of the Holocaust.

A quick look at the medical charts was enough. You have just two weeks to live, the doctor said. That was it; he then left the sick bay -- without giving his patient, the 10-year-old Eva, any medication. Why should he when he wanted the young Romanian girl to die. The doctor, Josef Mengele, had himself injected her with a lethal cocktail of bacteria.

It was the spring of 1944 when Eva Kor, along with her twin sister Miriam and her mother, arrived in the concentration camp Auschwitz-Birkenau. When the family climbed down from the train, an agitated SS guard ran up to them yelling Twins! Twins! A few moments later, Eva and Miriam were torn away from their mother. They never saw her again.


Fast forward more than 60 years, and the young girl Eva is now an old woman of 71. She has curly white hair and is, on this Tuesday evening, sporting a blue outfit with short sleeves and a silk shawl. On her left forearm, her tattoo from Auschwitz is still easily visible: A-7063. Yet while the fact that Eva is still alive may be astounding enough, it is her presence in Hamburg at the invitation of the Körber Foundation this week -- and the German debut of a documentary film about her life -- that really takes ones breath away. The film -- made by filmmaker Bob Hercules and historian Cheri Pugh, both American -- is called Forgiving Dr. Mengele. Because that is exactly what Eva Mozes Kor did.

Her story, though, came close to ending prematurely -- as did so many in the death camps of World War II. After being selected from among the new arrivals, the sisters were brought to the now-infamous camp doctor Josef Mengele. Mengele had a standing order for twins; he needed them for his medical experiments. Most of the time, he injected one of the twins with poison or with a bacteria or virus and then documented the development of the disease and the onset of death. As soon as the test patient died, he and his assistants would then immediately murder the twin sibling -- usually with an injection in the heart -- before performing simultaneous autopsies. Some 1,400 pairs of twins fell victim to Mengeles barbaric experiments.

And it was exactly this that he intended to do with the Kor twins. But he had another thing coming, Eva says defiantly. Thanks to an iron will -- and a strong immune system -- Eva survived the disease Mengele had injected into her veins. I just kept thinking, If I die, then Miriam will be murdered as well.

On Jan. 27, 1945, the Soviet Red Army liberated the survivors of Auschwitz-Birkenau and brought their nightmare to an end. Not too much later, the Kor twins emigrated to Israel. Eva then moved on to the United States, started her own family and became a real estate broker. But the suffering stayed with them. Miriam, too, had apparently received an injection from Mengele, but nobody could figure out what she was suffering from. Her kidneys, though, were failing. Once again, Eva did what she could to save her sisters life and donated one of her own kidneys. But the disease could not be stopped and, in 1993, Miriam died in Israel.

Since then, however, Evas story has become one of forgiveness and personal healing. It has also become one of controversy. After all, the film, shown at the Körber Foundation on Tuesday night, does not focus on annihilation and guilt, as do so many Holocaust films that came before it. Rather, it is about a woman who made peace with those who exterminated her family and who tried to exterminate her.

Kors path to peace began with a trip to the country of her would-be murderers from her current hometown of Terre Haute, Indiana. Only a few weeks after the death of her sister, Eva flew to Germany to meet with a German doctor. Hans Münch was his name, and he had worked alongside Mengele in Auschwitz. After World War II ended, the SS-medic faced war crimes charges, but was found not guilty. In contrast to his colleagues, it was found that Münch had not carried out any experiments on his patients.

A former Nazi with a shy smile

She was incredibly nervous when she finally found herself standing in front of Münchs door, Kor says. But then, an elderly gentleman with snow-white hair, a carefully trimmed beard and a shy smile opened the door. Yes, he admitted, he had been there during the gassings. And thats my problem, he went on. He still suffers from depression and nightmares as a result. Kor had gone looking for a monster, but found a human being instead. I then decided that I would write Münch a letter in which I forgave him, Kor says.

But the resolute Auschwitz survivor went even further than that. When, in January 1995, the 50th anniversary of the liberation of Auschwitz was celebrated, Kor brought Münch along. On the snow-covered site of the former extermination camp, she read a confession of guilt from Münch to the gathered press. She saw it as an important statement from an eye-witness that could be used to contradict those who would deny the Holocaust. But then, she said, In my own name, I forgive all Nazis.

The other former concentration camp prisoners were horrified. We have no right to forgive the perpetrators in the names of the victims, was the formulation often used. Kors private amnesty was shocking, said one woman who had also been a victim of Mengeles experiments on twins. And ever since Kors personal clemency, a number of Auschwitz survivors have done their best to avoid her. The pain and anger is just too deep. Can one really forgive pure evil? By doing so, does one not exonerate the murderers and torturers who ran the camps?

The American real estate agent today, though, is certain that she did the right thing. I felt as though an incredibly heavy weight of suffering had been lifted, she says. I never thought I could be so strong. She says that because she was able to forgive her worst enemies, she was finally able to free herself from her victim status. But, she is quick to add, forgiveness does not mean forgetting. What the victims do does not change what happened, she says. But every victim has the right to heal themselves as well as they can. And the best thing about the remedy of forgiveness, she says, is that there are no side effects. And everybody can afford it.