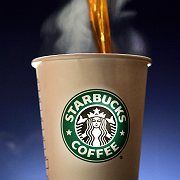 Fancy a hot cup of Yirgacheffe?

Think you know what's in your coffee cup? It used to be simple: ground coffee beans and water. Now though, your average robusto has given way to a grande double non-fat latte with a shot of vanilla syrup. The 20 cent cup of mud has turned into a $4 coffee experience.

Still, even as coffee has gone upscale, the barista whipping forth your drink still works with coffee beans. How they find their way from plantations to your mug is a quintessential tale of globalization, complete with giant wealthy corporations, poor local farmers and conflicts over who is entitled to what.

The most recent dispute in this economic food chain involves Starbucks and the Ethiopian government. The giant coffee franchise opposes Ethiopias efforts to trademark the names of its most famous coffee regions Sidamo, Yirgacheffe and Harar. Starbucks, after all, is already using those names to sell coffee for top dollars across the globe. A clear case of a developing country defending itself against rapacious Western business interests, right? Oxfam, the UK-based development agency, thinks so. It is championing Ethiopias move and has embarked on a massive media campaign accusing Starbucks of keeping the small farmer under its thumb.

"Harar and Sidamo have sold in coffee shops for up to $24 and $26 per pound," Seth Petchers from Oxfams Make Trade Fair campaign told SPIEGEL ONLINE. "Farmers who grow these specialty coffees get as little as $.60 to $1.10 per pound. We want to work to find a win-win solution." Oxfam estimates that over time Ethiopias coffee industry would benefit from an additional $88 million annually were the trade marking plan to go through.

Starbucks, though, insists that it is not trying to deny Ethiopian farmers their legitimate coffee profits. Alain Poncelet, Starbucks head of Green Coffee Purchasing, told SPIEGEL ONLINE that his company is all for Ethiopia "protecting its regional names." Just not through trademark. Starbucks favors a geographic certification model -- similar to Jamaican Blue Mountain Coffee, Florida Orange Juice and Napa Valley Wines - which guarantees a point of origin and standard of quality.

So which model is best? Your answer to that question likely depends on which end of the supply chain you're on.

Ethiopia's efforts to protect the "Sidamo" name actually began way back in March 2005. But the country's application to the US Patent and Trademark Office (USPTO) went nowhere for the next 15 months. Starbucks, as it turns out, had already applied to trademark an expression that included the word "sidamo."

In June 2006, the giant coffee distributor withdrew its application and took a different approach to get its way. According to Oxfam, Starbucks leaned on the National Coffee Association (NCA) to help block Ethiopia's bid. And it worked. In refusing Ethiopia its trademark, the USPTO cited a position directly from the NCA letter of protest: The names Ethiopia wanted to trademark, it argued, were "generic."

Ethiopia has until December to appeal the USPTO's decision -- a move the country will likely make -- and the government, with the help of Oxfam, is trying to get the NCA and Starbucks to stop blocking the trademark process.

A clear stake in the retail price

But the Starbucks regional label model likewise has its adherents. Ron Layton -- CEO of Light Years IP, which is representing Ethiopia in its trademark bid -- even points to Jamaican Blue Mountain Coffee as an example of how "it is possible to increase the income of producers of coffee in a way that is both possible and sustainable within the industry." But that's not happening in Ethiopia. According to Layton, while Ethiopian producers get only 6 to 10 percent of their product's retail price, their Jamaican counterparts capture as much as 45 percent.

So what's wrong with the regional model? Layton argues that certification -- while it works well for a smaller country like Jamaica -- would be too difficult to implement in Ethiopia. There are literally millions of Ethiopians moving coffee beans to only a handful of distributors like Starbucks. Rather than trying to coordinate the price internally between these bean suppliers, a trademark -- unlike certification -- gives the local coffee producers a clear stake in the retail price.

Plus, isn't Starbucks cashing in on the regional labels itself? Petchers says that by pursuing trademarks, "Ethiopia is attempting to employ the same strategy used by corporations to build brands and capture a fair return on their equity."

Starbucks, for its part, argues that -- were trademarks to be implemented -- roasters might shy away from buying the coffees for fear of becoming embroiled in complicated legal disputes. Or worse, they may buy the coffees and just market them without the trademarked names. Letting the high quality beans go to market without a geographic identification would completely undermine the value of the brand. And here, Starbucks' interests converge with those of the Ethiopian coffee farmer: Both want to protect the value of the product.

For Ethiopia, protecting the value of its coffee is vital to the country's economy. Oxfam estimates some 15 million Ethiopians earn their living through coffee farming, and the commodity accounts for 40 to 60 percent of the countrys exports. When coffee prices plummeted between 2000 and 2003, Ethiopias coffee revenue dropped by almost 60 percent, Oxfam says.

Such a dependence on coffee also explains why Ethiopia is eager to avoid a major dispute with Starbucks. Indeed, should the trademarks come through, the country is offering a licensing agreement to the Seattle-based company free of charge. Already, 11 other US coffee companies have signed such royalty-free agreements acknowledging Ethiopia's ownership of the names.

What is "market price?"

Starbucks prides itself on its socially friendly business practices which see the company regularly paying above market prices for premium coffees -- fully 23 percent higher last year. The CAFE program -- Coffee and Farmer Equity -- likewise seeks to ensure that profits trickle all the way down to the farmers who grow the beans.

The problem, though, is that the "market price" Starbucks is referring to is the commodity price for high-grade coffee that gets set in New York trading. Ethiopian coffees, though, are specialty products and fetch up to $26 per pound in US stores.

Layton argues that the financial rewards for Ethiopia's "unique, non-commodity product" are only being reaped by the distributors like Starbucks. A trademark scheme would up the benefits for Ethiopians, he argues.

Assuming, of course, that any profits from the plan don't merely end up in the pockets of the country's politicians and middle men. The country just last week was ranked 130 out of the 163 countries on Transparency Internationals 2006 Corruption Perceptions Index. That combined with the minimal amount of leverage Ethiopian coffee farmers have on the global marketplace is a bitter brew indeed.