The death toll on Dec. 26, 2004 was horrifying. Some 230,000 people around the Indian Ocean basin died as a result of the devastating tsunami that hit the coasts of Indonesia, Thailand, Sri Lanka and India among other countries. Soon afterwards, governments and organizations across the region and around the world pledged to create a tsunami early warning system. But what they can't do is prevent further, violent quakes in the region. And such quakes, say a number of research teams investigating independently of each other, are likely to come sooner rather than later. 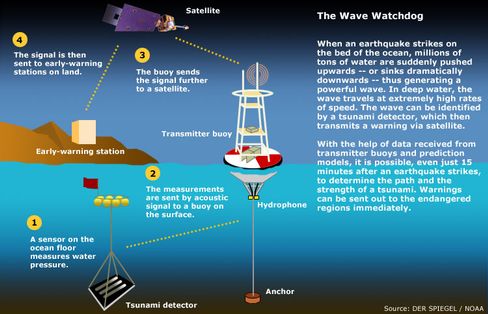 Sonar images of the ocean floor off Indonesia -- taken by the Leibniz Institute of Marine Sciences at the University of Kiel -- have given researchers cause for disquiet. The images, created by Wilhelm Weinrebe and his team of scientists, take a closer look at the sea floor near Sumatra, some 5,000 meters (16,400 feet) down. The Australian Plate dives beneath the continental shelf here, creating incredible tension as the two rock masses rub against one another. And recently, according to the researchers from Kiel, the pressure hasn't dissipated one bit; they found no evidence whatsoever of any large tremors in the recent past. In other words, a violent earthquake deep below the ocean is overdue.


The Kiel team aren't the only ones concerned. Geologist Kerry Sieh from the California Institute of Technology is likewise worried about a repeat of the tsunami catastrophe. In recent months, he has examined kilometers of coral reefs off the coast of Indonesia. His conclusions? He discovered that the Dec. 26 earthquake -- and the large quake on March 28, 2005 -- ripped open the border between the two continental plates like a zipper. But only a quarter of the border's length was affected. South of the two earthquakes' epicenters, there hasn't been a powerful quake for centuries.

In other words, says Sieh, the bedrock is strained to breaking point. And the two recent quakes served to increase the pressure even further -- by the equivalent of 50 years worth of plate movement. The "earthquake clock" thus took a great leap forward -- toward another devastating quake according to Sieh. He says it won't be much longer.

Last year's violent tsunami unleashed death and destruction on a massive scale, but it also unleashed an almost unparalleled research campaign. At a moments notice, research ships like the German ship "Sonne" or the American ship "Performer" -- ships that are normally booked out for years at a time -- were suddenly freed up for projects in the region. For months, researchers criss-crossed the ocean near the quake's epicenter examining the ocean floor far below.


In minute detail, they were able to reconstruct exactly what happened below the ocean floor off the coast of Sumatra on that fateful Sunday. Two thick plates of rock, each dozens of kilometers thick, rub against each other there -- and often they stick, creating enormous tension. Earthquakes are, for the two plates, the geo-tectonic equivalent of a sneeze and release the built up pressure. On Dec. 26, 2004 at 1:58 a.m. Central European Time, the South Asian Plate couldn't withstand the tension any longer: an edge of the plate broke off and the rest of the plate jerked upwards. With a magnitude of 9.3, it was the strongest earthquake anywhere in the world in the last 40 years.

From the northern tip of Sumatra, a 1,300 kilometer long rip in the Earth's surface suddenly appeared. A deep gash raced northwards at a speed of 2.5 kilometers per second, and the ocean floor instantly raised 15 meters. The thrust created the monster tsunami -- a wave which caused terrible damage even thousands of kilometers away.

The tremors shook the entire globe. Like a rug being shaken out, Sri Lanka rose and fell fully nine centimeters. A number of islands were shifted dozens of centimeters -- the entire Indian subcontinent moved east by two centimeters. Weeks after the quake, the entire Earth was still vibrating.

Best alarm system in the world

The new research, which seems to indicate that the catastrophe could soon repeat itself, has added renewed urgency to the creation of a tsunami early warning system in the Indian Ocean. The system is to be constructed by a German team, though earthquake research in Germany was hardly a major area of research before last year. Now, though, a number of institutes are involved in the project and have been funded by the German government to the tune of €45 million.

Japan and the United States, both experienced with tsunamis and tsunami research, were also interested in developing the early warning system for the Indian Ocean. When they were not awarded the project, they became reluctant to share their expertise and data with the Germans. In any case, US researchers found the plan to develop a modern early warning system within just three years to be unrealistic. Undeterred, the German group, led by Jörn Lauterjung from the National Research Centre for Geosciences located in Potsdam, said they planned to build the best alarm system in the world. But nobody quite knew how it was to be done.

But that changed. In countless meetings, described by participants as "chaotic and creative," the concept took shape. Faster than anticipated, they found qualified engineering firms to build the necessary equipment.

The basis of the warning system is a network of Richter scales, or earthquake measuring devices. They're important, because most tsunamis are caused by quakes on the ocean floor. The more seismometers placed in a region, the faster and more accurate the readings for locating a quake -- and in a tsunami-warning system, every second counts.

The Indian Ocean is still too crudely outfitted with seismographs to give accurate, on-time warnings, which is the reason 40 machines with uplinks to satellites will be installed in the region. Within 2 minutes the strength of a sea-floor quake can be measured, Lauterjung promises. The first seismographs are already being installed.

One important element of the warning system is a network of buoys that sense dangerous fluctuations in the ocean surface. Two German test-buoys dance on the waves already, about 160 kilometers from the Sumatran coast.

Clearly impressed by the progress of the Germans, the US experts gave in. Last August they released their data and agreed to cooperate. Ships from both nations explored the bottom of the Indian Ocean and fed the maps into computer models intended to predict the course of future tsunamis. It was an ambitious enterprise, and the Americans have puzzled for nine years on similar programs for their Pacific Coast -- so far without breakthrough success.

From the intensive research after the tsunami catastrophe, other coasts emerged as endangered. The Atlantic and the Mediterranean also needs better protection. If political conflicts made work in the Indian Ocean nations difficult, cooperation was easier along the Atlantic and Mediterranean coasts. They'll have cooperative alarm systems ready by the end of 2007.

If another massive earthquake and tsunami hit Asia, though, even the best warning system wouldn't save everybody in the affected region. The city of Padang, with its almost 1 million residents, for example, lies just north of the earthquake zone. Following a large quake under the ocean, a tsunami could reach the city -- some of which lies below sea level -- within minutes.

When the Dec. 26 tsunami struck the Indonesian town of Banda Aceh, it flowed up to eight kilometers inland and killed tens of thousands of residents. Padang has three times as many people as Banda Aceh and fully half of them live fewer than five kilometers from the coastline. Were a major tsunami to hit the city, the American geologist Sieh fears, the death toll could end up much higher than the 169,000 who lost their lives in the Banda Aceh region late last year.