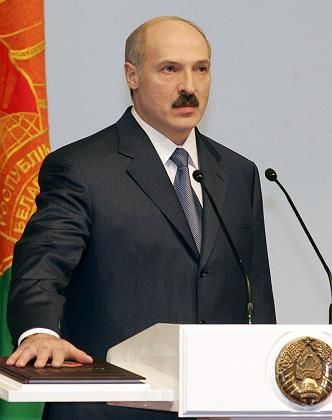 President Alexander Lukashenko and 35 other officials  have had their bank accounts frozen by the EU.

If the underlings of Belarus President Alexander Lukashenko have not yet transferred their savings and wealth outside of the European Union it's now too late. In addition to a visa ban issued in April, the EU has frozen the bank accounts of Lukashenko and 35 high-ranking state functionaries. The measure constitutes a delayed reaction to last March's widespread electoral fraud, as well as to the violent repression of the political opposition in Belarus. "No funds or economic resources shall be made available, directly or indirectly, to or for the benefit of the persons concerned," the EU said in a statement, according to the Associated Press. Lukashenko's office has denounced the EU measure as "utterly absurd."

But Maryna Rakhlei, a journalist who works for the independent news agency Belapan in the Belarus capital Minsk, cautions against attributing too much significance to the measure. "The EU announced it would do this more than a month ago. Everyone had enough time to transfer their money to countries such as Sudan or Cuba," she said, arguing that the EU measure is purely symbolic without any practical effect.

She's right to be skeptical. The EU has been struggling to develop an effective strategy for dealing with Lukashenko ever since he came to power in 1994. Many observers are convinced that, far from having the desired effect, the sanctions will help the authoritarian ruler strengthen his position by providing him with new ammunition for his propaganda against Western "enemies of the regime."

The political opposition of Belarus is hoping for closer contact with the EU. Opposition leader Alexander Milinkevich was released from prison last week after serving a 15-day sentence for taking part in an illegal rally. The movement he represents remains intact despite the outcome of the last elections, although it is also in need of outside support. Milinkevich has repeatedly requested financial and political support from the EU and the United States. Unfortunately, contact with the outside world is not something that can be taken for granted in Belarus.

Citizens living in rural areas are particularly isolated, and hence susceptible to Lukashenko's propaganda. The president presents himself as a concerned father-figure one day, visiting an old woman by her sickbed, and as a strong leader facing up to a threatening NATO another. The independent press has largely been suppressed.

Comparisons between Belarus and other post-Soviet states that have undergone recent revolutions such as Ukraine or Georgia reveal important differences. In both Ukraine and Georgia, the people faced imperfect democracies, whereas the political opposition of Belarus is faced with what it cynically defines as an imperfect dictatorship. Civil society is fairly strong in Ukraine and Georgia, but it's only beginning to take shape in Belarus.

Those who participate in opposition activities or contribute to the critical press expose themselves to the risk of violent repression and immediate incarceration. The country's militia has become more aggressive since the elections in March, which were criticized as a prime example of electoral fraud by Western observers. The opposition is forced to meet secretly. The state controls the people with an iron fist.

A swift transition to democracy can hardly be expected. The political opposition consists of communists, nationalists and members of other political currents. It struggles constantly with internal divisions. At the moment, it's still recovering from the elections. Milinkevich and his supporters are currently working on a new strategy. They're trying to set a date for all those against Lukashenko to come together and protest his rule in public, as they did after the election farce.

But the problem is that the people of Belarus presently see no alternative to the country's partnership with Russia. Lukashenko depends on the support of Russian President Putin. Belarus can only avoid complete economic collapse so long as Putin keeps natural gas prices far below market value.

Officials in Brussels will think twice before offering the 10 million people of Belarus the hope of EU membership. The EU has enough on its plate with the upcoming admission of Bulgaria and Romania, scheduled for next year. Other countries such as Turkey and Croatia are also hoping to join. Presenting a post-dictatorial nation such as Belarus with even the long-term prospect of membership would be a true challenge for the bloc.

The sanctions are therefore only important mainly as a gesture of support towards the political opposition, which depends on European and US organizations. The opposition movement must continue to grow if it wants to weaken Lukashenko's rule, just as the people of Belarus have to grow tired of his arbitrarily exercised power.

Unfortunately, that's not likely to happen soon in a country where homo sovieticus is still alive and well.