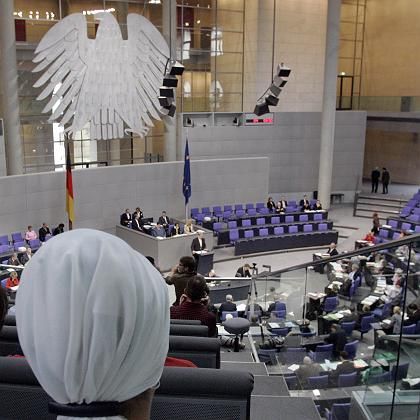 A Turkish-German parliamentarian has received death threats for her critique of the head scarf.

With the increased focus on immigrants in Germany, it sometimes seems like integration success stories don't exist. They do. And Ekin Deligöz is one of the country's finest. A Turkish-born German citizen, she now serves in the seat of German democracy, the Bundestag. But, cultural emissaries like Deligöz don't only build bridges, they also sometimes expose the vast differences that make their existence so crucial.

That, in fact, is why Deligöz is now kept company by a police detail. The Green party member has received death threats for calling on Muslim women to take off their headscarves and to embrace German society and values two weeks ago. "You live here, so take your headscarf off," Deligöz was quoted by the Bild am Sonntag newspaper as saying.

In addition to the threats, she has also been the victim of a negative media campaign in Turkey with tabloid stories comparing her to the Nazis. In a letter of complaint written to the Turkish Ambassador by the head of the Green Party Renate Künast, she indicated that Deligöz had been "insulted in writing, by telephone, and also in person  overwhelmingly by Turkish men."

Deligöz sees the headscarf as a symbol of female oppression and patriarchy. If it were just a fashion accessory, she says, "then I wouldn't now be under police protection."

A number of Muslim organizations in Germany have accepted an invitation from Künast and the Greens to discuss the threats and to talk about "behaving with respect toward each other."

Meanwhile, a number of German politicians are vociferously denouncing the threats and defending Deligöz's right to freedom of speech. "It is absolutely legitimate that a woman who is Muslim herself  makes this appeal, said German Interior Minister Wolfgang Schäuble. In an interview with the German radio station RBB, he continued, "What we lawmakers must decisively support is that someone can voice these opinions and that one doesn't need police protection to do so."

Norbert Lammert, president of the Bundestag and a close ally of Chancellor Merkel, called the threats "a severe attack on the core values of our constitution."

Deligöz is pleased at the support the German government has provided. "Most threats were supposed to intimidate me," she said, "but in a democratic society it should be possible to also express a critical opinion."