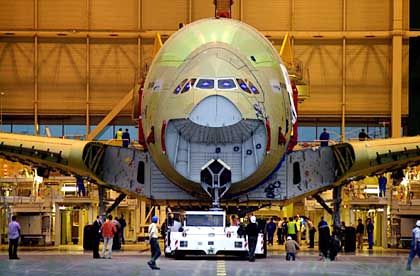 An Airbus A380 being assembled in Toulouse.

For 59-year-old Noël Forgeard, last week was the blackest seven days of his almost 30-year career. The week began badly for the ambitious head of the European air and defense company EADS. It ended in his departure.

Last Monday the French minister of finance, Thierry Breton, called for a speedy solution to the leadership crisis which has been building up in EADS over the last three weeks.

The politician was deliberately non-committal about what Forgeards role in the new set-up would be, even though the co-chief of EADS was until recently a close confidante of French President Jacques Chirac, who he once served as advisor.

Until the end of last week Forgeard, together with former Daimler executive Tom Enders, headed up EADS, the company which owns the worlds second largest aircraft manufacturer Airbus.

But Forgeard was forced to stand by powerlessly and watch as inspectors from France's stock market watchdog scoured the Paris headquarters of EADS. Their aim? To get to the bottom of suspicious stock transactions carried out by Forgeard, and around half a dozen other top managers, three months before more delays in production of the prestige jet A380 were announced.

Forgeards next low point came on Wednesday. The self-confident graduate of the elite business school Ecole Politechnique was forced to stand in front of a special committee of the French National Assembly like a third-rate delinquent to explain to parliamentary representatives how and when he first found out about the hitches in production of his beloved jet. 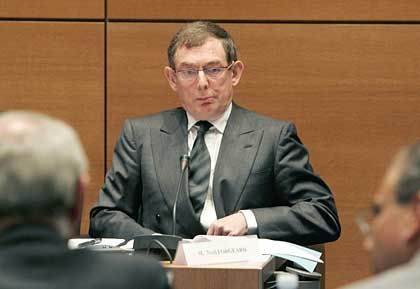 Between 1998 and 2005 Forgeard himself headed Airbus before moving up to the top floor following a bout of heavy infighting. The controversial manager put on a valiant show in front of the committee. I am honest and competent, he shouted out, in fighting mood, at the peoples representatives.

His carefully prepared performance did him little good though. Last Friday the owners of EADS decided that the man who wanted to write aviation history with the A380 will have to go. Gustav Humbert, the first German to make it to the top management of Airbus, also has to leave. The group will now be led by Enders and the 62-year-old head of the French railway system, Louis Gallois.

Until 1996 Gallois headed up the aircraft company Aerospatiale, which later merged with EADS. Its been a long time since the downfall of a top European manager has created such a stir. At the beginning of last week a French daily newspaper published the protocol of a meeting of the EADS finance and inspection committee in which Forgeard came across as an iron-fisted inspector, persistently demanding details from Humbert on when the A380 would be finished.

That didn't stop the head of DaimlerChrysler, Dieter Zetsche, from demanding quick changes at the top of EADS last Wednesday. In other words, at least indirectly, he was calling for Forgeard to go. Together with the French government and media group Lagardère, the German automotive company holds almost half of EADS shares. Even German Chancellor Angela Merkel and Chirac got involved early in the management shake-up, although their advisors are declining to confirm this.

Intrigue and lack of control

Once so highly praised as a rival to the American company Boeing, the former leadership of EADS has managed, through intrigue and a lack of internal controls to manoeuvre itself into a dangerously mess.

Such problems will not be solved simply by replacing a few managers. At the beginning of last week Forgeard and other top managers were still denying vehemently that they knew about problems in the manufacture of the A380 before the profit revision of June 13.

Yet as early as February 24 a paper was already being passed round work committees and trade unions in the Airbus factory in Toulouse, where the final assembly takes place, in which the manager in charge of production was sounding the alarm.

Large numbers of improperly equipped fuselages kept arriving at the enormous construction hall. As a result the experienced engineer ordered that tools be laid down straightaway at position 40, where the giant aircraft are put together. He also called for further deliveries from the factories in Hamburg and St. Nazaire to be halted.

As a result hundreds of men, who could have been putting their time to better use, suddenly found themselves tinkering with half-naked aircraft hulls. According to one employee representative, months before this, the companys European works council was already discussing the A380s production problems, and the effects these would have on employees.

The whole world knew, the employee representative says angrily. So apparently the bosses of Airbus and EADS are the only ones who didnt have a clue?

A group spokesman defended his colleagues, saying: Delays in major projects are not unusual in the aircraft industry. He added that the technicians and engineers responsible maintained right to the end that they would be able to deal with the aircrafts teething problems.

So did the managers of EADS and Airbus just not know what was going on? Or did they stop the news getting out on purpose to avoid a drop in the share value, giving themselves a chance to make a timely profit? That is now up to the stock market inspectors to find out.

One of the things which should help them in this task is the transcript, which was even circulating in the Internet last week, of a May 12 meeting of the group's board. It's a devastating indictment of the main leadership and control organ of the company which as well as EADS chief executive included the designated head of DaimlerChrysler's supervisory board, Manfred Bischoff, and French media mogul Arnauld Lagardère. 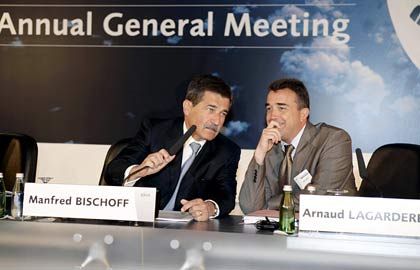 The supervisors: designated DaimlerChrysler supervisory board head Manfred Bischoff (l) and Arnaud Lagardere during the EADS annual shareholders' meeting on May 11 in Amsterdam.

At times, the transcript shows, they all seemed like a long-haul crew flying blind to an unknown destination.

While the Germans tried again and again to take refuge in vague prevarications, Forgeard and his soon-to-be successor Gallois kept insisting on concrete facts and figures about the A380s progress  but to no avail.

Airbus chief Humbert even told his colleagues they would have to wait until August for fresh information, saying it would only become clear after long-haul tests this summer whether further, more extensive modifications of the A380 would be necessary.

It seems Bischoff didnt want to wait any longer. He ordered a special investigation, the result of which was ready at the beginning of June and a week later led to the biggest collapse in the EADS share price since the company was floated in 2000.

What at first sight looks like the heartfelt intervention of a concerned top-level manager is unlikely to impress the stock market inspectors currently investigating share transactions carried out by top executives at EADS and Airbus. In addition to probing the executives' deals, officials want to examine whether DaimlerChrysler and Lagardère knew more than they're currently prepared to admit when they each sold 7.5 percent of their EADS stakes at the beginning of April.

A spokesman for DaimlerChrysler dismissed the suspicion. We have looked through all the transcripts of past board meetings and have come to the conclusion that they contain no indication of problems with the A380, he said. He added that the board was not informed about the halt to final assembly at the end of February  an unprecedented thing to happen in a company of this size.

This is the view also held by French bank Caisse des Dépôts, which took over some of Lagardères EADS shares in April. The buyers now feel so duped that they are even considering demand compensation from the media company. According to a spokesman for DaimlerChrysler, up until the end of last week, no claims for compensation had been received by the car manufacturer.

As if all that weren't bad enough, the managers of EADS now have to dig deep into their pockets for yet another grave error of judgment: the new development of the A350 long-range jet.

The Europeans want to announce details for the first time at the upcoming air show in Farnborough, near central London, in July. According to Forgeards statements before the special committee last Wednesday, the aircraft is likely to cost billions of euros more than the planned cut-price version, which failed with customers and as a result swallowed up eight billion euros.

We have put aside a lot of cash, says one EADS spokesman in an attempt to disperse worries that the company cant afford the project. EADS has also said it has access to numerous as yet untapped credit lines. EADS insiders are also blaming Forgeard for the flop of the pepped-up A330, once supposed to compete with Boeings big seller, the 787.

The supervisory board is not at fault, asserts one EADS spokesman. After all, board members arent aircraft or marketing experts. They have to rely on the judgment of the head of Airbus. In a German DAX-listed company the supervisors wouldn't get off so lightly after such serious strategic errors.

Whether the management changes at Airbus and EADS will be followed by changes in the supervisory board is up to the head of DaimlerChrysler, Dieter Zetsche, whose group is the biggest EADS shareholder with a 22 percent stake. Whatever happens, it looks like it will take a while before EADS and its subsidiary are out of the turbulence.

Tranlated from German by Damien McGuiness