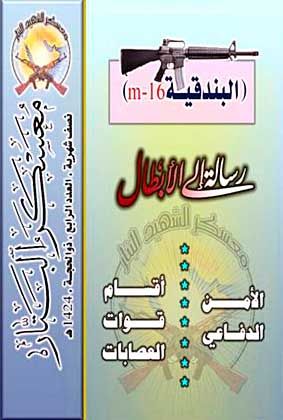 The cover of Mu'Askar al-Battar, an online military magazine published the Saudi branch of al-Qaida. The magazine is based in parts on the "Encyclopedia of Jihad."

The following text is an excerpt from the just-published book "The New Al-Qaida," by SPIEGEL ONLINE editor Yassin Musharbash.

With the smoke still rising from the ruins of the al-Qaida camps in Afghanistan, intelligence agents and journalists from all over the world were already combing through the rubble in an attempt to uncover information on the nature and quality of the training the camps' roughly 20,000 graduates had received.

One of the targets of their search was the legendary "Encyclopedia of Jihad," a collection of textbooks the terrorist network had used to instruct its recruits. The search didn't take long to bear fruit. In March 2002, the New York Times proudly reported that it had unearthed parts of the terrorist training manual in four different camps. Bit by bit, descriptions of the "Encyclopedia" were compiled. Depending on the classification method, the volume contained ten or eleven chapters, altogether encompassing several thousand pages. The Associated Press published a summary in which it listed the key topics in each of the sections it had acquired -- they included making explosives; first aid; use of pistols, grenades and mines; espionage; security precautions; acts of sabotage; secure communication; brainwashing; reconnaissance; infiltration; how to attack; the history and design of tanks; physical fitness; use of compasses; how to read maps; use of artillery guns, machine guns and armor-piercing weapons, etc. There are said have been only 30 complete copies of the "Encyclopedia," and the trainees were apparently required to copy down the text as it was dictated to them, much like "a monk in a monastery in the Middle Ages." The individual volumes bore the following inscription: "In the name of God, the merciful, the compassionate, this is the property of the guesthouse. Please do not remove without permission!" Whether these instructions were an attempt to avert theft or preserve secrecy is unclear. In any event, al-Qaida didn't exactly peddle the encyclopedia.

But that stance would eventually change. After losing its training camps, al-Qaida went on the offensive. By 2003, the entire "Encyclopedia" was suddenly available on the Internet. Thousands of illustrated pages containing bomb-building instructions, in-depth rules on how to encode information and extensive details on organizing terrorist cells were suddenly available -- in Arabic -- for anyone who knew what to look for. Indeed, as al-Qaida's fighters made their way around the world, their instruction manuals followed suit.

Al-Qaida's Afghanistan veterans were apparently the first to publish the "Encyclopedia" on the Internet. This can be seen by one of the early Web-based editions. Just underneath the title "Islamic Emirate of Afghanistan -- Office of Services -- Leadership for Military Camps and Fronts," it is noted that this is only the "Second Electronic Version" of the "encyclopedia." The preface also clearly indicates that the authors of this published version were intimately familiar with the original edition:

This is the "Encyclopedia" that the Arab mujahedeen wrote in the days of their struggle against the Soviets in Afghanistan, and in it they have written about what they learned through their attempts and many years of experience. ... We have divided it into two parts, which is not true to the original, but we have done this for reasons of simplicity. ... We have copied the "Encyclopedia" just as it is, except in a few places. This applies, for example, to the correction of errors ... or the insertion of subheads. We have also removed the dedication, which was directed to the Pakistani government in the days of the struggle against the Russians. This is because it was the government of General Dia' al-Haq, whereas today no Muslim will question that the current government (of General Pervez Musharraf) is not a believer in God and the Prophet.

The introduction is signed "Your brothers, the supporters of jihad." Over the years, volunteers repeatedly revised and updated this original encyclopedia. After the "Second Electronic Version" appeared, it became almost impossible to determine who exactly was responsible for these ongoing revisions. Experts agree, however, that parts of similar terrorist manuals written by the Palestinian Hamas and Algerian Islamists were inserted into the al-Qaida encyclopedia or incorporated into its text. Various encyclopedias are now available on hundreds of Web sites, that sometimes include parts of the original collection but also completely new manuals. Formerly top-secret instructions on producing biological and chemical weapons are also readily available today.

In April 2005, an Islamist Web site offered "updated versions of the encyclopedia," as well as a video on "the making of explosive belts." But none of this is particularly out of the ordinary today. It's even become relatively easy to find instructions for making dirty bombs, that is, explosive devices containing radioactive waste, on the Internet. In October 2005, an eleven-part manual on nuclear terrorism even made the rounds on the Islamist segment of the Internet.

By making its manuals accessible and relinquishing control over who was reading and acting on the basis of its materials, al-Qaida gave the green light to sympathizers who wanted to become active on their own. In doing so, al-Qaida transformed itself from a clandestine organization of caders into an interactive, and in part virtual, participatory network. Appeals from al-Qaida leaders made it clear what the organization wanted its supporters to do: "With the help of God, it will now be possible for you, on your own and in your own home, or together with your brothers and sisters (in faith), to begin with the implementation of this program," wrote Abd al-Aziz al-Muqrin, head of al-Qaida's Saudi wing. The program he was referring to was a terrorism course he had written based on the "Encyclopedia," and in which al-Muqrin offered his readers advice on matters such as how to organize a cell. The program makes it all the more clear how al-Qaida planned to offset the loss of its Afghan training camps by gradually bringing thousands of sympathizers from the Arab and Islamic world into the fold and turning vague supporters into self-made terrorists. In May 2004, al-Muqrin, in a message to all those who "wish to participate in jihad," wrote that "al-Qaida is based on a system of cells and is not principally interested in promoting conventional organizational involvement." According to al-Muqrin, "permission" to become active was no longer necessary. Although his primary audience consisted of the next generation of Saudi Arabian jihadists, the model was essentially transferable worldwide.

There is mounting evidence that this strategic decision has been paying off for some time. The Madrid train bombers, for example, downloaded the plans they used to make their bombs from the Internet. And the presumed terrorists who were arrested in Australia in November 2005 before they were able to launch their attacks also found their bomb-making instructions somewhere on the Worldwide Web. These descriptions are by no means complex, as a tragic incident in Norway in August 2005 demonstrated. Two brothers of Syrian descent, 17 and 19 years old, used instructions from the Internet to build a bomb with which they probably intended to blow up an ATM. But the device exploded prematurely, killing the younger and seriously injuring the older brother.

In 2005, a person calling himself "Ahmad, who trusts in God," gloated, in an essay published on the Internet, "Al-Qaida is a university for students of jihad." He was referring to the omnipresence of information for would-be terrorists. He continued:

Do you remember how al-Qaida got its start in the days of the Afghan jihad? It all began with the "Office of Services," the guesthouse (that housed Arab fighters) and the al-Faruq military camp -- and today al-Qaida has reached this blessed juncture! Al-Qaida ... is a university that is decentralized, respects no geographic boundaries and does not exist in any one location. And anyone who loves his religion can register. ... Praise be to God that the Al-Qaida University graduates (so many) heroes with various specializations. ... This university even has various departments: one for electronic jihad, one for jihad against oneself (in other words, to overcome one's own inner resistance), one for the technology of explosives and others. ... This university is still open, and it is saying to you: Oh you sons of Islam ... learn the art of jihad and its sciences! A student of jihad today and a mujahid on the path of God tomorrow!

"And a mujahid on the path of God tomorrow" -- these words map out the road from sympathizer to terrorist. Unfortunately, no one knows who is hiding behind the pseudonym "Ahmad, who trusts in God." But the author's enthusiastic language and the content of his writings suggest that he is probably one of the young men al-Qaida is trying to attract with its strategic choice to open up to the world. 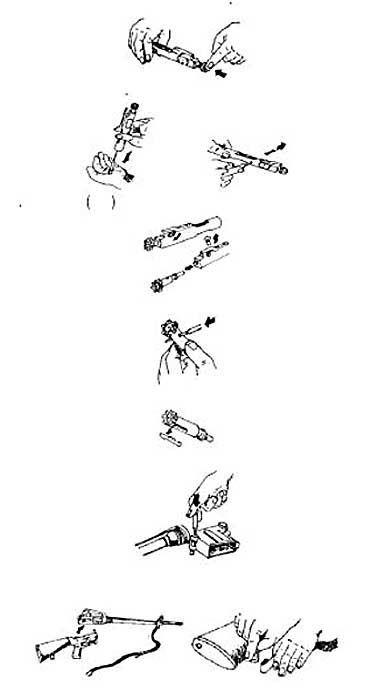 Encyclopedia of Jihad: Instructions for using a weapon

The phenomenon of this new al-Qaida also means that we can expect to see new types of attackers in the future. One of their characteristics is that they take action quickly and without lengthy preparation. In an "old" partial edition of the "Encyclopedia of Jihad," the following statement was made in the chapter on recruitment: "The process must take place gradually!" In the document, recruiters were instructed to only show recruits films about jihad or similar material after they were convinced of the steadfastness of the budding terrorists' faith -- and then only in half-lit rooms and never without supervision. Only months later could a recruiter, under the old system, inform recruits that he could indeed help them find the path to jihad. The Hamburg cell that was involved in the attacks of Sept. 11, 2001 was probably led to its task in a similar way. There was initially talk about sending the men to fight in Chechnya and then to training in Afghanistan. In the end, however, they were used to commit the biggest terrorist attack the world has ever seen.

But the more recent al-Qaida attacks show that those who plant the bombs or blow themselves up are less and less likely to have a classic al-Qaida career behind them. In fact, many had only brief contact with Islamist groups before becoming terrorists. That was the case, for example, with the four London bombers. So far investigators are convinced that only two of the four men spent time in a madrasa, or religious school, in Pakistan. In February 2005, Jane's Defence Weekly wrote with concern about what it called "significant developments" in the composition of jihadist terror cells, including "an increase in the number of members who have 'joined' and were no longer 'recruited.'"

An Arabic pamphlet circulating on Islamist Web sites at about the same time, titled "How can I become a member of al-Qaida?" seems to confirm that the path to al-Qaida & Co. is growing ever shorter. The pamphlet's response to its own question, according to a translation provided by the Washington based institute SITE, is as follows:

Al-Qaida is no longer merely an organization fighting Jews and crusaders alone. Today al-Qaida is an 'invitation' that asks all Muslims to rise up in support of God's religion. ... Whoever answers this call is seen as part of al-Qaida, whether or not you wish this to happen. But if you are a true Muslim, you have no other choice but to heed this call.

With this approach, al-Qaida is attracting instant mujahedeen who, like the London bus and subway bombers, essentially recruit themselves within a breathtakingly short amount of time. As a result, they are far more unpredictable and difficult to recognize than Afghanistan veterans.