SPIEGEL: At Wimbledon, there is a changing room for normal professionals and a more comfortable one for the stars. Nowadays, you are allowed to use the better one. Is it as luxurious as everyone says?

Zverev: It is very nice. Lots of dark wood, silver decorations. But you also get used to it very quickly.

SPIEGEL: Does one also notice in the changing rooms the degree to which Wimbledon is steeped in tradition?

Zverev: Definitely. This year, my brother Mischa and I are both allowed to use this special changing room, because we are among those professionals in the field who are rated higher. We were immediately told: "You are the first brothers to be in here together since 1982."

SPIEGEL: You are currently number 12 in the world rankings and have won three ATP tournaments this year. But you seem to have had difficulties in the big tournaments. This year at Wimbledon is the first time you have ever made it to the final 16 of a Grand Slam tournament. What took so long?

Zverev: Sometimes I am surprised by what people expect of me. I have only ranked among the top 16 since the French Open in May, which is why before that I always ran into the really good guys very early on. In January at the Australian Open, I lost to Rafael Nadal in five sets. But that match could have gone differently. Eventually, I want to win against players like that.

SPIEGEL: What about now? What brings you satisfaction at this stage of your career?

Zverev: When I know after a match that I have delivered my best tennis. When I know that I have played as well as I can. It doesn't matter so much whether I have won or lost. But being completely satisfied with myself? That's something that never really happens to me.

SPIEGEL: So far, your career plan has worked out. Your first year as a professional: 2014. Your first victory in an ATP tournament: 2016. In the top 10 for the first time: 2017. In what year will you win your first Grand Slam?

Zverev: If I win one at all.

SPIEGEL: Why so modest?

Zverev: I know that I have the potential. And the opportunities. But I don't say: "I want to win the Australian Open in 2018." It doesn't work that way.

SPIEGEL: How does it work? Roger Federer says that the future of tennis belongs to you. Rafael Nadal views you as an upcoming number one in the world rankings.

Zverev: I try to pay as little attention as possible to people who are not part of my team. What counts for me is what my father says, because he is my coach. I listen to my brother and my fitness coach. I don't care about anyone else.

SPIEGEL: Do you think some accolades are an attempt by other players to put you under pressure?

Zverev: In the case of Federer and Nadal, I feel sure they are not praising me too highly as a way of breaking me. They are eventually going to end their careers and when they do it will not matter to them who follows in their footsteps. But the coaches of some players who are my own age keep saying publically about me: "This guy is going to be one of the greats." I am clever enough to know that they do not truthfully think so. They are trying to shake my confidence. Of course, this is a matter of tactics.

SPIEGEL: Boris Becker won Wimbledon in 1985 at the tender age of 17. Why does it take longer to get to the very top nowadays?

Zverev: I believe a Grand Slam will never again be won by a teenager. Tennis has become much more physical, more strenuous, everything happens much more quickly. When you are 17 or 18 years old, you are not yet physically ready to battle your way through five sets in almost every match for two weeks. What Boris achieved back then was incredible. But he was not as comprehensively fit as the guys are today; he had a different build and less muscle mass.

SPIEGEL: How do you train to prepare for the challenge?

Zverev: I spend many hours in the weight room with my fitness coach. I do deadlifts, that is lifting a barbell with a straight back, and by now I can lift quite a lot of weight. I lift 150 kilograms (330 pounds).

Zverev: No, no. Eight times. With a minute-and-a-half break between sets. Then I do squats with over 100 kilograms (220 pounds) on my shoulders. We train the leg muscles in particular, that is where the power is needed. If you do too much for your upper body, you mess up the swing in your arm. I go to the track and do 400-meter runs for muscular endurance; after that I move on to the Versa Climber.

Zverev: A Versa Climber is a strength-building machine.

SPIEGEL: What exactly does it do?

Zverev: It causes pain. You hang in it vertically, moving your legs as though you were climbing stairs. At the same time, you pull yourself up with your arms. You look like a mountain climber sprinting up a rock face.

SPIEGEL: Do you enjoy it?

Zverev: Oh yes, because I notice when I am on the court that it helps me. Fitness has become an extremely large part of our sport.

SPIEGEL: Nevertheless, the tennis circuit is currently dominated by older players. When you played against Federer in Halle two weeks ago, you went down 1:6, 3:6.

Zverev: Roger is currently playing the best tennis of his career.

SPIEGEL: And that at the age of 35. Doesn't that speak against your fitness theory?

Zverev: He probably knows his body better than any other athlete. He feels small details and when he notices a twinge, he holds back. He just took a six-week break in the middle of the season. Pretty clever. I was somewhat tired in Halle, and then Roger played fast balls. If I was standing on the left side at the back, they would land accurately in the front right-hand corner. He didn't grant me a single millisecond.

SPIEGEL: Your grandma played tennis, your mother and father were professional players in the Soviet Union. Your brother ranks number 30 in the world. Did you have an opportunity in your life to become anything other than a tennis pro?

Zverev: Up until the age of 13, I also played football and field hockey in Hamburg. But in the end, I enjoyed tennis the most.

SPIEGEL: Your brother Mischa is almost 10 years older than you. He was already playing in major tournaments when you were still a young boy. You often travelled with him, getting to know the tour as a small child.

Zverev: That was all I knew as a child.

SPIEGEL: Was it useful in your career?

Zverev: I have known Novak Djokovic and Andy Murray since I was four. Back then, Mischa travelled to the tournaments around Europe with them and they used to play a few rallies with me on the half court. Later, when I had to play against them for the first time as a professional, I was not immediately paralysed with fear like others.

SPIEGEL: As a child, you probably often lost to your brother.

Zverev: When that happened, we had to play again. And again. Until I won for a change. Or Mischa let me win. By then it was often already dark on the court.

SPIEGEL: Did your ambition arise from the duels against your brother?

Zverev: We have always competed with each other in everything we do. He is just like me in that respect. No matter whether we are playing cards or FIFA on the video console, or basketball: We keep playing until there is a clear winner.

Zverev: Friendly trash talk. We are both too well brought up to really quarrel.

SPIEGEL: You are at an advantage playing basketball because your brother is seven centimeters (3 inches) shorter.

Zverev: Yes. But he is broader. Mischa is good at shoving.

SPIEGEL: It has been said that you'd rather be dead than come in second place.

SPIEGEL: If things aren't going well on the tennis court, you are inclined on occasion to smash your racket. Are you sometimes embarrassed afterwards?

Zverev: Not at all. You have to show emotion, otherwise your sport doesn't mean anything to you. Of course, the referee will give you a penalty for it. But to be honest, I don't quite understand why. What is so terrible about breaking a racket?

SPIEGEL: Perhaps it doesn't conform with the notion of tennis as a white, genteel sport.

Zverev: The referees want to make us all equal; we are supposed to be robots. Yet our sport would actually be more interesting to young people if there were more different types of people on the court again. Players who do not hide their personality because it is forbidden by the rules. I am not insulting anyone, I only want to be able to vent my anger once in a while.

SPIEGEL: Does it help you?

Zverev: I have the feeling that I am more relaxed afterwards and can better concentrate on the match again. It is like pressing the reset button.

SPIEGEL: Your game is characterised by your speed. How do you manage to be so fast and agile at your height of 1.98 metres (6'6")?

Zverev: Field hockey helped me in that respect. That's a game where you always have to move around low to the ground, where there are lots of rapid changes in direction. That prepared me for tennis. Perhaps that's why my father sent me off to play hockey.

SPIEGEL: What kind of coach is your father?

Zverev: A quiet one. I become agitated easily when something isn't working. Then he says: "Relax, wait, you'll get there eventually."

SPIEGEL: When you are training, are you father and son? Or coach and player?

Zverev: Let me put it like this: As a father, he definitely gives me more freedom. I have huge respect for him. He got Mischa and me into the top 30, even though we have very different styles of play.

SPIEGEL: It has been claimed that Boris Becker may soon start coaching you. Would he fit in with the Zverev family?

Zverev: I think he could be helpful. With his experience and know-how, he could teach me a great deal. He's someone with whom I already have a lot of contact today, we speak with each other, phone each other. But I also think that I may not be ready yet to hear certain pieces of information. I would like to establish myself among the top 10. The mental training and the finer details will come later perhaps.

SPIEGEL: More people in Germany are again becoming interested in tennis, also thanks to the success of Angelique Kerber. Do you consider yourself a role model in your sport?

Zverev: If I start winning Grand Slam tournaments, I'll be happy to be. At the moment, we have Angie, who is the world's number one. I am sure that more people know her than know me.

SPIEGEL: Which may also be because you do not reveal much about yourself. You're not to be found on Facebook or Twitter. Why?

Zverev: Unnecessary things happen there. Like this argument right now between John McEnroe and Serena Williams...

SPIEGEL: ... McEnroe said that if she played against men, Williams would at best rank at number 700. Williams defended herself on Twitter...

Zverev: This discussion was complete nonsense, I don't need that sort of thing. The less active I am on social media, the fewer problems I have. I don't want to argue with other people on Twitter.

SPIEGEL: For some of your colleagues, it's part of their marketing strategy.

Zverev: I don't need all that fuss surrounding tennis. It's like this: As long as I win on the court, everything else will happen by itself. 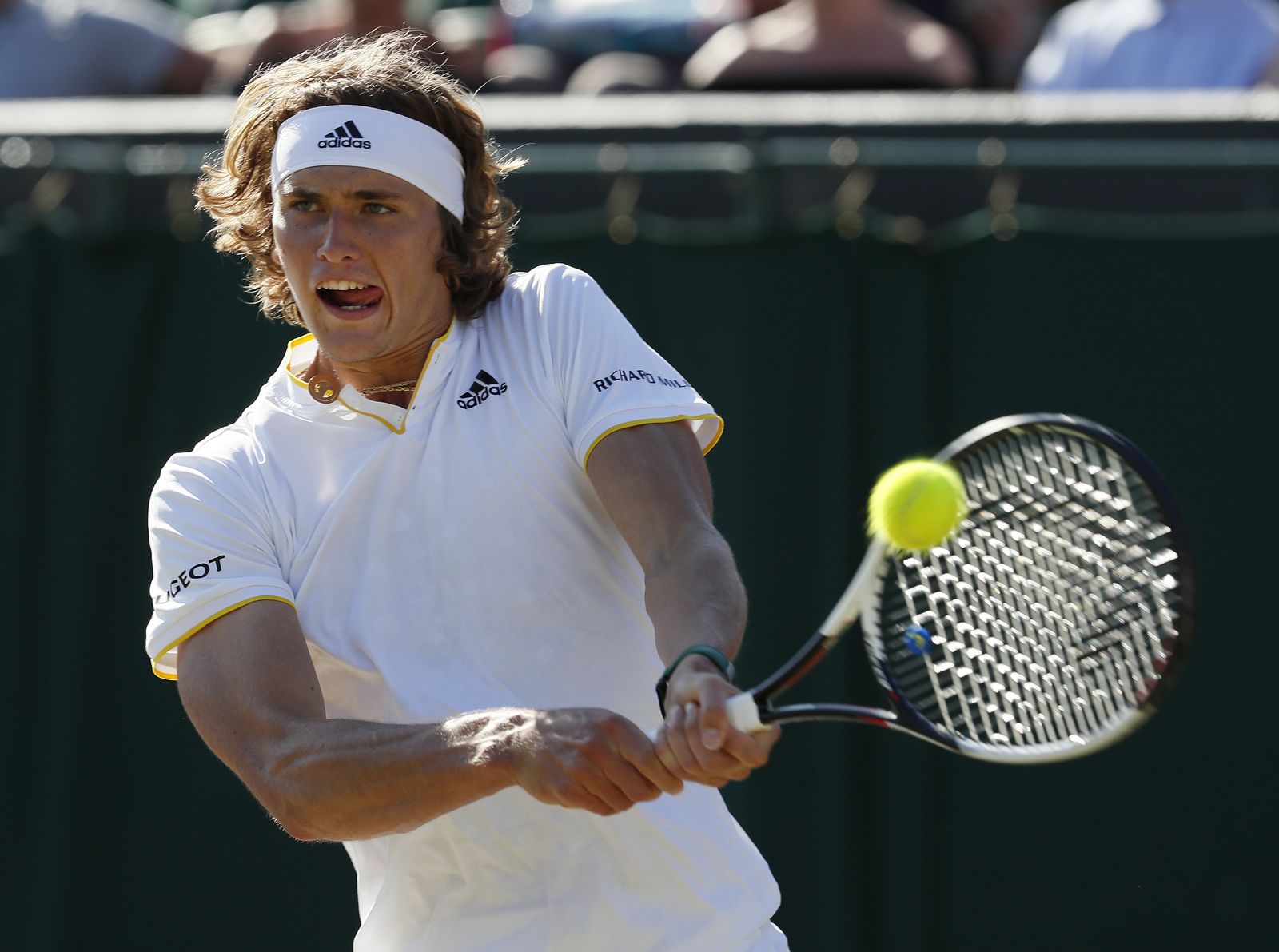