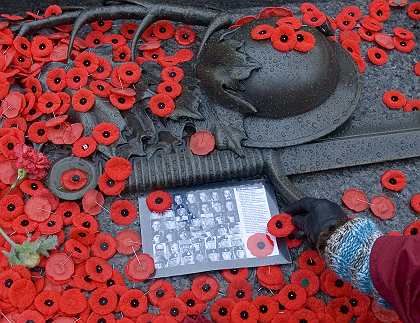 Poppies on a war memorial honoring those Canadians killed in Afghanistan.

So close, yet so far away. German troops are only a chopper trip from Afghanistan's war-torn southern provinces -- they could be deployed to dangerous combat zones within moments. But, the gulf that separates the Bundeswehr and its NATO allies holding the south is a wide, tangled mess of legal caveats and domestic politics that no chopper can traverse.

Once again this week, the friction that has been steadily building between Germany and its NATO allies flared up as 340 parliamentarians gathered in Quebec City, Canada for their annual meeting. Things are not going well in Afghanistan and allies fighting in the more dangerous southern part of the country are fed up with countries -- like Germany, France, Italy and Spain -- refusing to send reinforcements from their relatively peaceful sectors in the northern Afghanistan.

According to the German Green Party defense expert Winfried Nachtwei, who was at the meeting -- as quoted by the Frankfurter Allgemeine Zeitung Web site -- a British participant said that there are soldiers in Afghanistan who drink beer or tea, and there are soldiers who risk their lives.

The friction arises out of the very real danger being faced by US, UK, Canadian and Dutch soldiers in the Kandahar region. Forty-two Canadian soldiers and 41 British have been killed in Afghanistan. They trail only the US, which has lost a total of 350 soldiers. Together, the three countries account for 90 percent of total coalition casualties.

Meanwhile, German troops in the north have been limited by the parliament in Berlin as to engaging in combat -- and have seen little reason to change those caveats despite NATO pleas for more troops and more flexibility.

Germany makes the point that it has some 2,900 troops stationed in Afghanistan, 6,000 stationed elsewhere in the world, and is tapped out militarily. "We have Lebanon and other commitments," said Helmut Königshaus, part of the German delegation in Quebec City.

While NATO has upbraided some countries for sending too few troops -- Austria only has a token contribution of 5 soldiers -- Germany isnt one of them. The problem is the limitations those troops are under.

British Labour Party parliamentarian Frank Cook said NATO troops in the south are being let down by countries like Germany. Referring to battles between Canadians and Taliban in Afghanistan's Panjwaii region, Cook said the Canadians asked for help from allies stationed in the north and were denied. "Five NATO countries refused," he said, because of "national caveats" that prohibit them from engaging in combat.

German public opinion has been cooling on the country's numerous overseas involvements and a lifting of the caveats would likely be a difficult domestic sell. But the disagreement isn't likely to go away soon. A NATO summit is scheduled for the end of the month in Riga, Latvia.

And the reputation of the alliance is at stake. "If we don't have success in Afghanistan," said Canadian parliamentarian Leon Benoit, "the future of NATO is really in question."