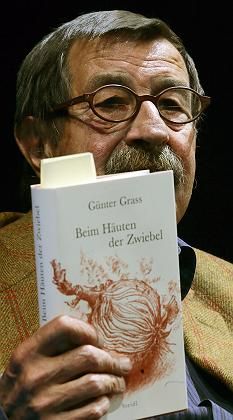 Günter Grass gave his first public reading from his controversial autobiography in Berlin on Monday.

When one of Germanys greatest living writers gives the first public reading of a new book, it's clear the place will be packed. So it wasnt surprising that tickets for the Berliner Ensemble theater sold out immediately for Günter Grass' first public appearance since controversy broke over his new autobiography Peeling the Onion -- the most talked-about German book this year. On Monday night the TV cameras, flashing photographers and dreadlocked anti-neo-Nazi demonstrators calling for Grass to return his Nobel prize only heightened the mood.

While many of his fans were there just to hear Grass read -- and get his autograph on copies of the book -- just as many had evidently turned up to find an answer to the question the country has been asking the past few weeks. Why did Günter Grass, Germanys self-appointed moral voice, wait over 60 years to reveal that he had served in the elite Nazi Waffen SS between 1944 and 1945? The audience listened in rapt silence as the author was interviewed by TV presenter Wolfgang Herles. Judging from the sympathetic laughter and occasional applause, the crowd was on his side; and whether it was thanks to the glass of red wine he was sipping, or the fact that his story's finally out, Grass appeared to be relaxed, confident and almost enjoying himself. The author started by explaining how he came to serve in the SS in the first place.

Grass: It is a long story which began in the stupidity of my youth: I volunteered to serve in the submarines at the age of 15. It turned out that they werent taking any more conscripts, so they sent me to the Waffen SS. In the few days when I saw so-called action, it was really all very basic.

Herles: There has been a lot of discussion about why you came out with this revelation right now. Many people have said it was nothing more than a great PR stunt to promote your book.

Grass: You can advertise for all kinds of things, but seemingly not for books. That appears to be a written law. The publisher had printed a prospectus, sent it to the critics, it sat there for weeks, no one said a word. Then the whole debate kicked off, and everyone started talking about it, without even having read the book. Now we are starting to have a more nuanced discussion because the book has reached the readers.

Herles: Were you surprised about the ferocity of the debate? Did you expect it would be like this?

Grass: I had never thought respectable literary critics would stoop so low. (Applause from audience.) Let me explain why I waited so long before talking about this period of my life: It took me a long time to find a suitable form. I didnt want to just stand in the spotlight and announce I had been in the SS for a few weeks or a few months. I wanted to portray it all in the larger context of my youth. To explain how it is possible for someone of my generation to fall into it. But I had no literary form to tell that story, because I have always had a great distrust of autobiographies. I have doubts about our capabilities of actually remembering correctly. Memory tends to sanitize the past and simplify complicated things in order to make them fit into a logical narrative. The ambitious point of this book was to include these doubts. But I hadnt counted on the reaction.

Herles: But can you now understand why many critics dont accept this? Surely you had enough chances to talk about these experiences? For example in the whole debate surrounding Reagan and Kohls visit to the SS cemetery of Bitburg.

Grass: But I criticized this visit because I felt, and I wasnt the only one, that dead soldiers were being made use of for political aims. It was all show

Anyone who reads the book will see I have very different criticisms of this 14, 15, 16, 17-year-old boy: that he was able to overlook certain things, that he remained silent and didnt ask any questions. For example, a boy I went to school with, who I met again in 1990 as an old man, disappeared from school one day. And I didnt even ask where he and his family had suddenly gone. Or a Latin teacher of mine who was sent to the concentration camp of Stutthof (near Gdansk, Poland, which belonged to Germany when Grass was born there). Concentration camps existed in every part of Germany and everyone knew about them. In Gdansk we didnt know anything about Buchenwald or Dachau, but we did know about Stutthof. Even I knew about it. And none of us asked any questions. This is what I criticize.

But as for those weeks and months of training in the SS -- I just fell into that through no fault of my own.

Herles: Did you know what a concentration camp was?

Grass: We assumed they were penal camps, and we thought they were run according to (some idea of) justice. No one talked about mass extermination. It wasnt until a year or two after the war, when I was in Allied captivity, that I started feeling really appalled, that I realized the enormity of the crime. That millions of people had been coldheartedly murdered. This was the fault of the Germans, and in particular that of the SS. It was only then that I felt ashamed.

Herles: But just to get back to the point about why you kept silent so long. Some critics believe it was to prevent your image being damaged. That you didnt want to destroy your business model.

Grass: You know, that is a topic which appears inexhaustible. I am looking forward to doing the reading.

Herles: Yes, well get to that in a minute.

Grass: I have really no idea what goes in journalists heads. You work in the media. You should know better than me. (Clapping and laughter from audience.)

Herles: I dont want to present myself as spokesman for the whole industry

Grass: But why should I know what journalists think?

Herles: But you have raised questions, and this book provides even more unanswered questions. So it should seem normal that others would try to answer the questions themselves.

Grass: If there are riddles in the book, then I am not the person who should solve them. People have to think a bit. These superficial theories say more about the critics than anything else.

Herles: Last question then, before you do the reading. Have these last two or three weeks of intense discussion changed you? Or are you the same person you were before?

Grass: Its too early to judge. I was shocked. Some commentators have said I should now keep quiet and only express myself on literary matters. But I got a lot of supportive letters from friends and strangers, which really helped me. I am still standing, and I will continue to open my mouth, when I think it is right to do so.