The road to General Bloodagent ends in a small suburban community on the edge of Atlanta with simple, ranch-style houses, well-groomed lawns and pick-up trucks in their driveways.

The general’s house can be recognized from the "Trump 2020” sign in the front yard. The neighborhood rules actually prohibit political advertising here. "Let them complain,” the general says. "The people talk a lot about individual freedom, but they don’t understand the concept.”

"People talk an awful lot about individual freedom, but they don’t seem to get the concept.”

General Bloodagent isn’t a real general. In middle-class, civilian life, his name is Chris Hill and he works as a paralegal. "My friends call me Bloodagent,” he says. He also had "Bloodagent” tattooed on his forearm.

It's his nom de guerre, his fighting name. Hill is the head of a militia he founded six years ago, which he claims has 75 members. It once had 350, but some members broke off from the group.

Why did the group break apart? "Why did Guns N' Roses split up?" Hill asks in response. "The left gathers under a single cause. It's harder for the right wing." But Hill argues that 75 battle-ready men is better than a divided group.

The interview takes place in his command center, which is to say, his garage. It contains two old sofas, a desk with two laptops. Instead of conflict updates, the screens mostly show YouTube videos.

Hill is convinced that the day in which he will have to fight will arrive soon. As he sees it, there are two possible scenarios. If all goes well, he says, Trump will win a landslide victory on Nov. 3. "Then the left will absolutely burn down the cities,” says Hill. "There will be unrest, dead civilians.”

But don’t the polls suggest a clear victory for Joe Biden, the president’s Democratic challenger?  Hill's smile is telling. "There are thousands at Trump’s rallies. Biden is sitting at a meeting with four people in Wisconsin.” He says Trump is miles ahead and that it's tangible.

And the second scenario? Hill grabs a bottle of Heineken from the fridge. He pulls a pistol -- a .40-caliber Smith & Wesson -- from his holster, takes the magazine out and removes the bullet from the chamber. Of course, it’s possible that Trump will trail on election night, he says. But he if that proves to be the case, he believes it will not reflect the true distribution of votes. He says not everything is being done above board.

He says he knows "first-hand” of people who have received four ballots and argues that many states governed by Democrats are actively encouraging people to commit electoral fraud. Hill says that "Veritas” found out, for example, that Ilhan Omar, a Muslim Democratic congresswoman in Minneapolis, had paid money for ballots.

Veritas is a project run by right-wing activist James O’Keefe. His findings are backed up by about as much proof as Trump’s claims that hundreds of ballots were found in a river. Despite persistent inquiries at the White House, reporters have not been able to determine who supposedly found the ballots or in which river.

But for Hill, it’s indisputable that the Democrats are conducting large-scale campaign fraud against Trump. Hill’s militia calls itself the "III% Security Force.” Several dozen armed groups in U.S. have names that include a three-figure percentage in them. The names allude to the supposed portion of the population that took up arms against the British during the American war of independence.

Like hundreds of other militias, many of these groups are preparing for Day X -- the day on which Trump will no longer be president and a supposedly large-scale attack by the Democrats on the Constitution will take place. As Hill puts it, it will be "the day on which they will rap on our door.”

The Right Are Worried about Their Weapons

It’s not totally clear which constitutional principles the Democrats would potentially violate. "The right to bear arms,” Hill says. Then he shows a CNN report on his computer in which a mother is tasered by a security guard at a football game at her son’s school because she isn't wearing a mask.

It's an extreme and isolated case. But for Hill and his people, it's an example of what will happen to the country if Joe Biden becomes president. "When you see how they trampled our rights during the crisis caused by the coronavirus, anything is possible,” he says.

"The situation is really bad. And it will continue to escalate.”

It remains unclear what exactly Hill intends to do in the event of a Biden victory. "I’m not going to sit here in my house and wait for someone from the government to take my weapons,” he says. But it's not as though he can just attack the White House. "I simply won't wait," he repeats. His militia’s crest includes the words: "When tyranny becomes law, rebellion becomes duty.”

Civil-rights organizations like the Southern Poverty Law Center have classified the III% Security Force as a right-wing extremist group, and Facebook has blocked Hill’s website. But he sees himself wrongly pushed into the racist corner. "We're not racists. We defend the constitution."

Are there any black members in his group? Hill frowns slightly. He says next week someone is planning on stopping by to introduce himself. "They come and they go, you know.”

It’s presumably not so easy to get African-Americans enthused about a militant group whose leader has a Dixie flag hanging in his garage, a man who claims that the U.S. Civil War was about tax increases, not slavery, and who believes that the real racism is currently coming from the Black Lives Matter movement.

It’s difficult to assess how serious all this talk of resistance really is. Hill says he has military training: "1st Battalion, 3rd Marines, Charlie Company Weapons Platoon.” He says that he and his men spend 80 percent of their time together on "FTX” - field training exercises that are meant to recreate true-to-life situations as realistically as possible, including urban riots, an enemy attack and food shortages.

It would be easy to dismiss Hill and his militia as a group of kids playing cops and robbers in the forest, were it not for the fact that they have real weapons. The conflicts that are currently taking place in the U.S. are also very real.

Hill himself was involved in fistfights between right- and left-wing groups at Stone Mountain, near Atlanta. And three people were recently shot dead during similar clashes between the left and the right in Kenosha, Wisconsin, and Portland, Oregon. "The situation is really bad,” says Hill. "And it will continue to escalate.”

A few days after the interview, Hill sends a short video via the messenger service Signal. It shows him during a military exercise – 12 shots with a pistol from different positions at a metal target. Every shot is a hit. Someone in the background shouts, "Kill." "Bingo," says Hill. 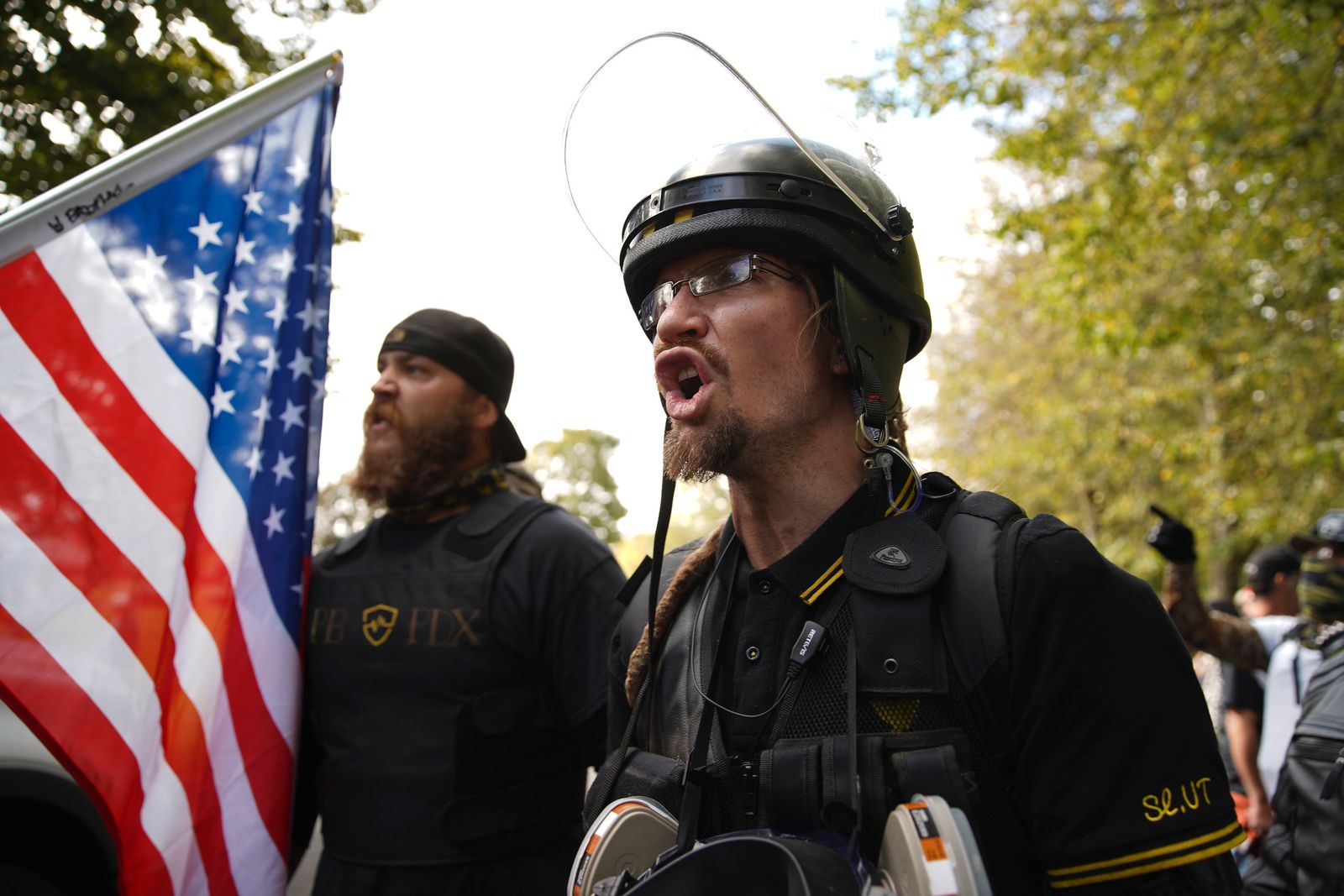 Members of the Proud Boys and other right-wing protesters at a rally in Portland: "There will be unrest, dead civilians.” 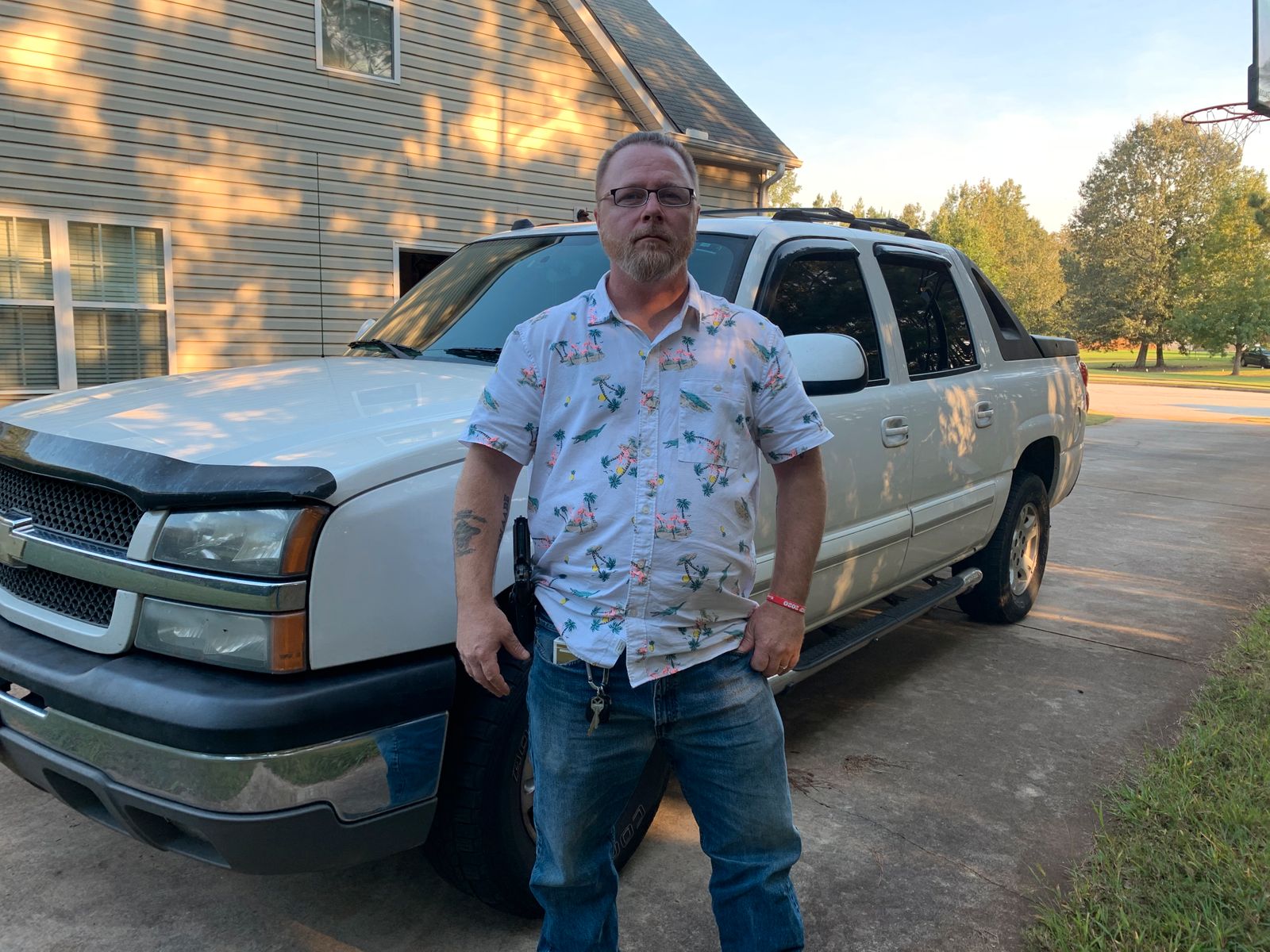 Militia leader Chris Hill: "I’m not going to sit here in my house and wait for someone from the government to take my weapons.” 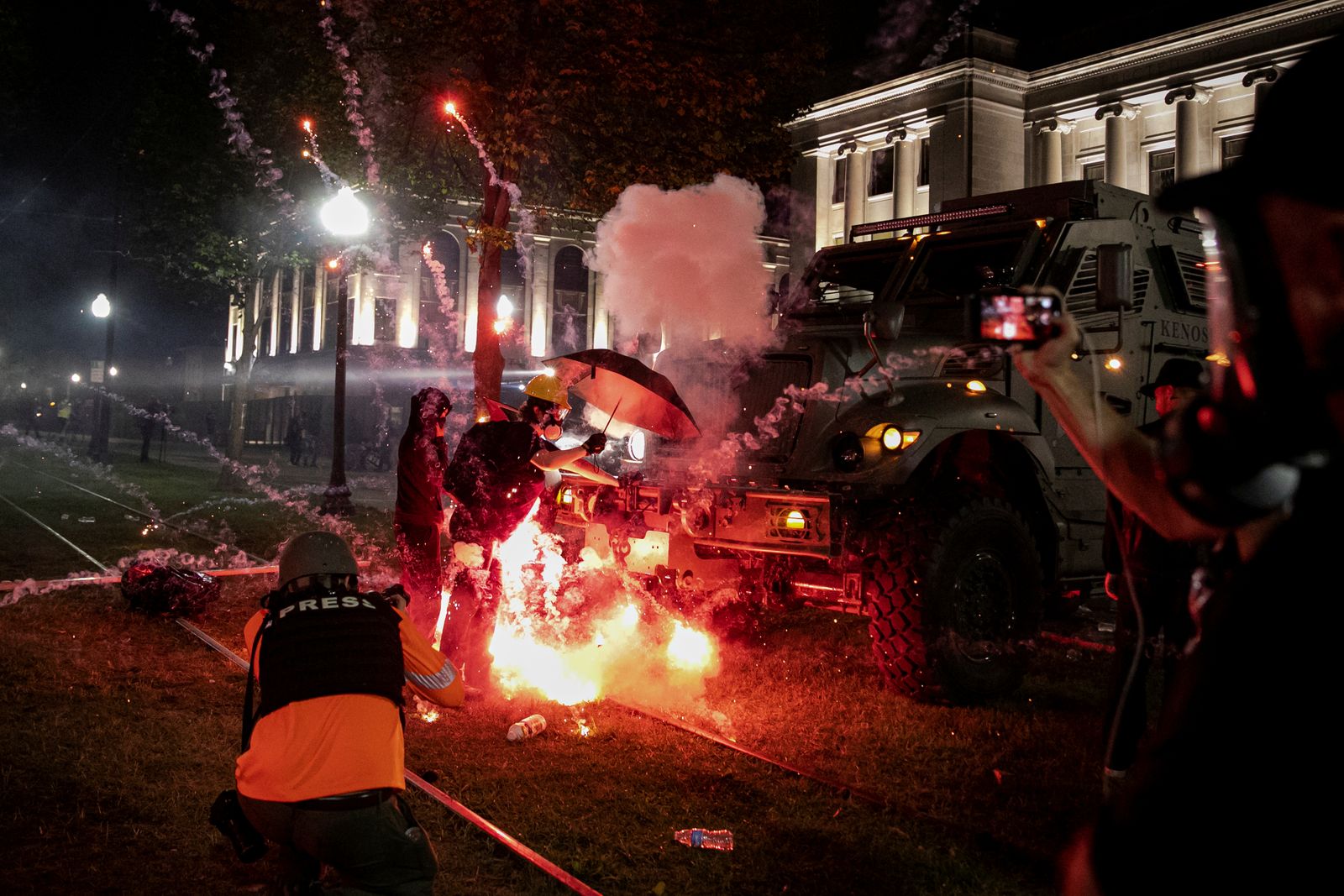 Protests after the killing of Jacob Blake in Kenosha, Wisconsin