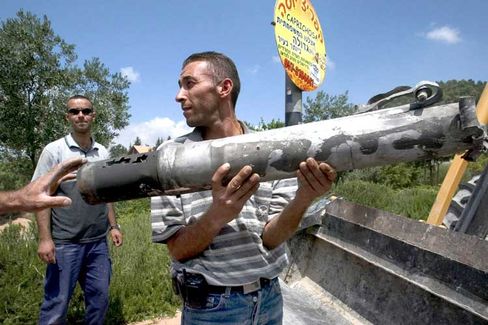 A Israeli man holds a part of a Katyusha rocket at the main road of the northern Israeli town of Safed on July 14.

The human rights group Amnesty International released a report on Thursday saying the radical Muslim group Hezbollah committed war crimes during the 34-day battle with Israel. According to the Associated Press, the Lebanese Islamists launched nearly 4,000 rockets into northern Israel in July and August, killing at least 39 civilians.

Amnesty International has called for a United Nations inquiry into possible war crimes by both Israel and Hezbollah, which fired rockets indiscriminately into urban areas. The rockets were loaded with metal ball bearings to do the most possible harm to civilians, Amnesty said.

The report is Amnesty's harshest criticism of Hezbollah since the conflict began in July, after the Islamists kidnapped two Israeli soldiers in a cross-border raid. The group plans to publish additional reports studying whether Hezbollah contributed to civilian deaths in Lebanon by purposely hiding among civilians, Nicole Choueiry, a spokeswoman for Amnesty in Britain, told the Associated Press.

Israeli Foreign Ministry spokesman Mark Regev said he had no doubt that Hezbollah's militia fired rockets in a premeditated way to kill a maximum number of civilians. "It is also important to remember that the leaders of Hezbollah have spoken on many occasions about their desire to destroy the state of Israel," Regev said. Hezbollah leader Hassan "Nasrallah used the word 'obliterate,' and I think a call to this sort of genocide is problematic and must also be considered a fundamental breach of international norms and international law."

But Amnesty has also blasted Israel's massive military response to the incident, which left large chunks of Lebanon in ruins and included using controversial weapons such as cluster bombs in civilian areas.

The month of fighting killed more than 1,000 people. Most of the dead were Lebanese civilians and nearly a third of them were children, according to UNICEF.

A UN-brokered cease-fire in August stopped the violence and a UN peacekeeping force is being formed to help stabilize southern Lebanon along the border with Israel.