Stephen Hodes, who bears a slight resemblance to actor Robin Williams, stands at an intersection in Amsterdam's historic center, and alternates between slapping his hands together above his head and closing his eyes. He's about 70 years old, with a ring of gray hair, and dressed in a partly unbuttoned, casual shirt. From here, he has a view of Central Station, where trains arrive every few minutes, disgorging armies of people with rolling suitcases into the city. Nearby, the hop-on/hop-off boats, every last seat filled, arrive and depart. In front of the venerable Hotel Victoria, between the Damrak shopping area and the red-light district, hordes of tourists bike through red lights on their rented bicycles. Instead of looking at the street, they are staring at Google Maps on their smartphones, causing residents to jump back on the sidewalks and swear out loud. Hodes counts three accidents and four collisions in 20 minutes.

This is his experiment, his desperate measure. But it's also the totally normal state of affairs in summertime Amsterdam, the chaos that blooms in a city beloved and overrun by growing masses of people.

Hodes was one of the first people to rent out bicycles in Amsterdam at the beginning of the 1970s. Then he moved to New York, to work as the head of marketing for the Dutch tourist office. For many years, he was responsible for selling Amsterdam, the city of free thinkers, to Americans. This capital of culture, city of Rembrandt, Van Gogh, Anne Frank, nightlife, free sex and legal drugs. "Holland is hot even in winter," went one of the marketing slogans he used at the time.

Now, 30 years later, Hodes still loves his city, but he is also suffering because of what it has become. "A consumption ghetto," he says, "a city on the verge of collapse." And he knows that he isn't entirely free of blame, which also might be part of what motivates him. Hodes is the founder of Amsterdam in Progress, a think tank that devises ideas and plans for Amsterdam's salvation. "It requires radical solutions," says Hodes, who claims that it's too late for anything less. "Amsterdam needs to make itself scarce, the city cannot become a whore like Venice."

Stephen Hodes at one of the canals in Amsterdam's historic center: "There is a lot of fear that the city will become an amusement park and the last residents will disappear."

Hodes describes his concept as "limitation." He argues that "we need to decisively lower the number of flights and overnight stays, otherwise the residents will flee." The planned airport for low-fare airlines in Lelystad, a short train ride from Amsterdam, he argues, should never be approved. It would raise the number of flights coming into the area each year by 60 percent, from the current half a million at Schiphol Airport to 800,000. And the city's passenger terminal for cruise ships, he says, shouldn't be expanded. Finally, the city's annual tourism growth should not be allowed to exceed 1 or 2 percent.

Hodes emphasizes that officials shouldn't consider closing off the city, but that supply and demand should be better regulated. "When a music festival is sold out," says Hodes, while standing on the traffic-clogged intersection, "then it is sold out, then people have to wait or come back the next year. That's just how it is."

The city is indeed overwhelmed by the masses. It simply wasn't built for them. In 2005, 11 million people visited each year. Now, that figure is over 18 million. And many aren't just staying for a few hours, but for up to three nights, and every tenth stays for a week. Amsterdam already has as many Airbnb overnight stays each year as Madrid and Berlin, over 2 million, even though it is considerably smaller, with 850,000 inhabitants. "It's a village," says Hodes.

But Amsterdam is located in the progressive Netherlands, and citizens' advocacy groups, like Hodes', have been around for a while. And the city's municipal government could play a kind of pioneering role for other tourist centers, like Barcelona, Florence or Dubrovnik, by developing concepts to combat the over-commodification of the city, or at least taking a stab at it.

A few canals south of there, at City Hall, two district managers are giving a talk on behalf of newly elected Mayor Femke Halsema. Their goal is to explain how creative ideas can be used to return quality and diversity to a city, how one can set limits without building fences and to discuss the dilemma of wanting to remain a liberal city while establishing rules that apply to everyone, including visitors.

Two years ago, they developed "City in Balance," a remarkably strict catalogue of measures: Residents are allowed to rent their apartments and houses for a maximum of 60 days per year on home-sharing platforms like Airbnb and, as of 2019, that allowance will drop to 30. The construction of new hotels in the city center has been banned. Since November 2017, the city government has also banned beer bikes, a bachelor-party excrescence with a beer tap.

A more revolutionary measure is their decision to ban businesses catering exclusively to tourists: souvenir shops, postcard kiosks, cheese stores like the Cheese Company, which no resident would ever set a foot in, and the waffle-and-crepes stores, also known as "Nutella shops," that seem to spring out of the ground everywhere. The ban has been in effect for 10 months now, and is directed at new openings, not at already existing businesses. Still, no urban tourist center has gone this far.

And then there's the city's marketing coup, "Enjoy and Respect," an unprecedented campaign aimed at scaring people into better behavior. It is targeted at Amsterdam's most frequent guests: party-loving men between the ages of 18 and 34, devoted to alcohol and other drugs, and largely from the United Kingdom, Germany or the rural Netherlands. Whenever these men log onto the internet in the red-light district and the entertainment district of Leidseplein, images pop up with slogans explaining that Amsterdam deserves respect, and noting the 140-euro fines for loud singing, rambunctious behavior, littering and urinating on building walls. Even drinking on the street is punishable by a 90-euro fine.

Two weeks ago, the mayor announced that the so-called Handhaver, municipal employees who enforce these rules, can and will collect fines immediately using card readers.

On a normal Friday night in Amsterdam's red-light district, one sees "crowd managers" and "traffic controllers," as well as people wearing orange T-shirts with the word "host." They stand on bridges and in narrow alleys, and explain why the red-light district is red, and, in a friendly manner, point to the fact that 3,000 people, in need of quiet, still live here.

It seems harmless, given the bellowing, sweating masses of people pushing each other through the narrow alleys, past the windows with the women shaking their rears. Past the men in Super Mario costumes, English men having bachelor parties who get disastrously drunk and sleep outside before boarding their planes home the next day. Beer bikes may have been banned, but not their nautical counterparts, the so-called cocktail boats that glide through Amsterdam's canals to the sounds of techno, one after the other, carrying groups of tourists and cases of alcohol.

For tourism expert Stephen Hodes, who is himself battling the genie he helped out of the bottle in Amsterdam, the city's measures aren't radical enough. But he does like the idea of ombudsman Arre Zuurmond, who moved into the red-light district for three months to live and find out what measures might be necessary to rescue the city from the worst. His horrified tweets and photos from what he described as an "out-of-control urban jungle" got locals worked up and alarmed the municipal government as well. "There is a lot of fear," says Hodes, "that the city will become an amusement park and the last residents will disappear."

Hodes himself took this step long ago. He moved from his old canal house on the beautiful Oude Schans when the noise of the houseboats began disturbing him at night. "The overnight guests were always so stoned that, after a few minutes, they forgot their promise to be quiet." Hodes now lives on flat land, in a house with a yard looking out onto sheep and windmills. He lives in Muider, near Muider Castle, which has recently become known as Amsterdam Castle. It's another idea by Hodes' successors in the marketing department: Tourists are to be redirected there and to the North Sea beach of Zandvoort, which has been rechristened Amsterdam Beach.

"It's working," says Hodes, who also expresses concern about the development. "So well, that tourist buses are now parking in my village, and travel to Amsterdam has become even more attractive." 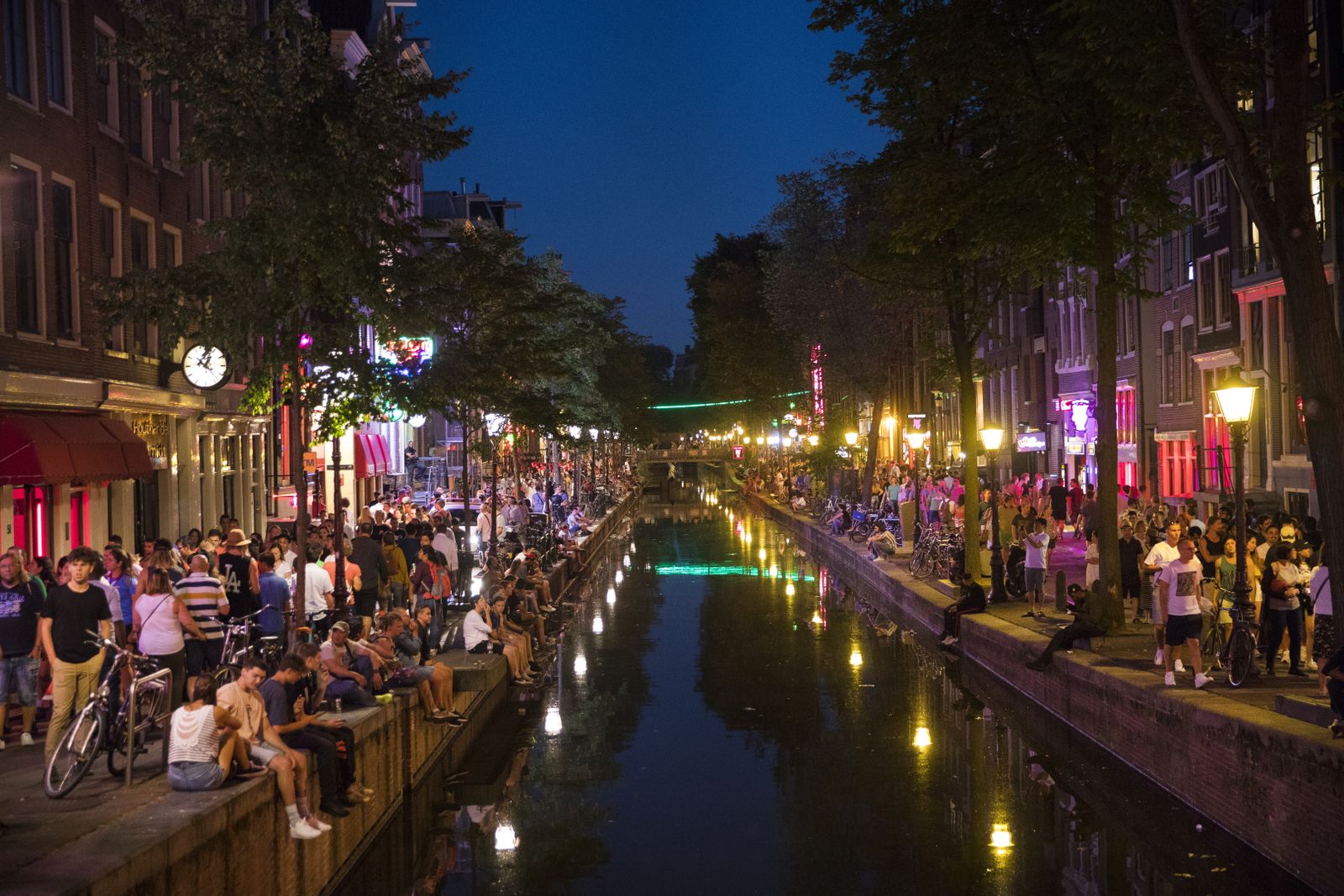 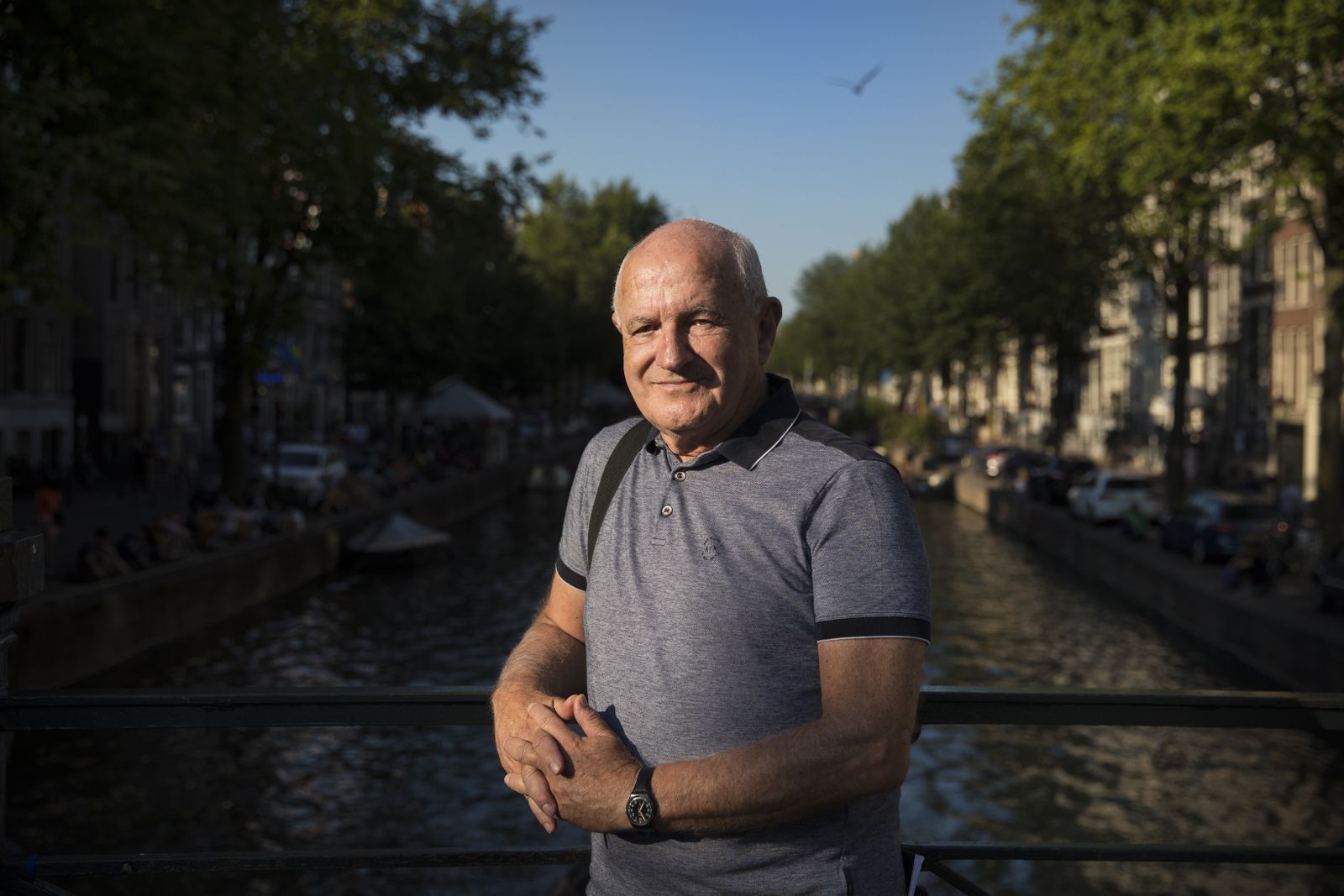 Stephen Hodes at one of the canals in Amsterdam's historic center: "There is a lot of fear that the city will become an amusement park and the last residents will disappear."