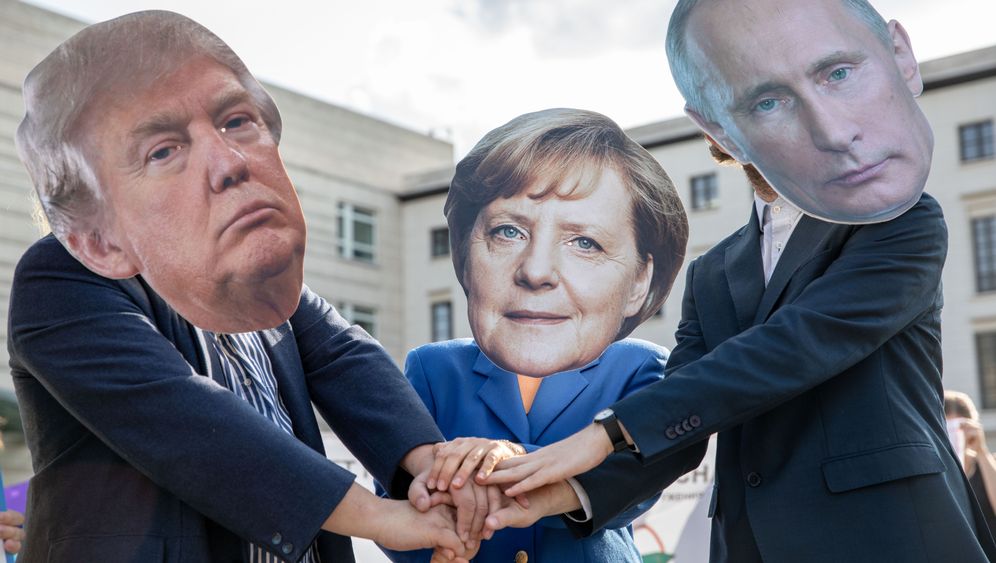 Photo Gallery: Reading Up On 'Tyrants'

DER SPIEGEL: Recently, a photo was published showing German Chancellor Angela Merkel reading your book "Tyrant: Shakespeare on Politics" on the balcony of the vacation resort where she was staying. Do you have any idea how she became familiar with your work?

Greenblatt: I don't know exactly, but I do know that she already knew about the book in May when she received an honorary degree from Harvard, where I teach. We met briefly and she said: "I heard you wrote a book about Shakespeare that describes our time today." And I said: "Yes."

DER SPIEGEL: The tyrants you describe are sociopaths, liars, cheats and populists, and they tear everyone and everything to pieces. There is now a discussion in Germany about whether the chancellor is pleased by the comparisons made between Shakespearean tyrants and Trump.

Greenblatt: That's what books are supposed to do: open up a space for us to reflect.

DER SPIEGEL: If the chancellor wanted to make a statement with her reading choice, then it was an indirect one. Your book also makes indirect statements considering that it doesn't contain a single reference to Trump. Why?

Greenblatt: Look, we all talk about Trump all the time. The fact that we're so fixated on him is part of the problem. In Shakespeare's Globe Theatre, which opened in London in 1599, spectators stood so close to the stage that they became part of the action. Shakespeare wanted to suggest that we all have a part in creating power, even if we are only the audience. We are fascinated by the tyrant. He amuses us, he disgusts us, his rise can sometimes seem like a comedy, sometimes like a tragedy, both have appeal. At some point, it turns out that everything consists of lies, but lies only work when people want to be lied to. We want to keep watching the tyrant, even though we know he's acting destructively. That's how we stabilize his power, and that's why I'm not fond of talking about Trump himself. To me, this is about Shakespeare, whose dramas explore the psychic mechanisms that move an entire nation to abandon its ideals, even its interests.

DER SPIEGEL: What are these mechanisms?

Greenblatt: For example: The tyrant can act as a populist, as one who represents the interests of his counterpart, the people. But he is deceiving people, because all he cares about is himself.

DER SPIEGEL: As an author, you distance yourself from the concrete person. Does this allow you to better identify the structures?

Greenblatt: Shakespeare showed the way, though his circumstances were profoundly different from my own. Unlike me, he really did have to watch his back. He lived in the early modern age, where critical words against rulers were considered treason and punished with torture and death, dismemberment and evisceration. The country was stirred up during Elizabeth I's reign by fears of foreign invasion and fanatical religious terrorists, and there were spies everywhere. Shakespeare chose the form of coded speech, shifting place and time: "King Lear" is set in ancient Britain, "Coriolanus" in Rome in 5th century B.C. and "Richard III" in 15th-century England. Shakespeare used their portrayals to show the typical moments in the rise of catastrophic leaders: the exploitation of internal disputes, deceptive populism, the interplay of various enablers who believe that they themselves can benefit from the rise of the tyrant.

Pulitzer Prize winner Stephen Greenblatt, 75, is a literary scholar at Harvard University, where he conducts research into the works of William Shakespeare. He is the author of the recent book "Tyrant."

DER SPIEGEL: The chancellor has her own constraints. For reasons of diplomacy, she can't always say what she thinks, and from the point of view of power politics, she has come a long way by not tying herself down too much. During the Harvard visit you mentioned, parts of her speech seemed to be aimed at Trump, although she also didn't mention his name a single time.

Greenblatt: That impressed me. She spoke of her experience growing up in the shadow of a wall. Anyone who wanted to could understand that as an allusion to Trump's politics, where a wall also plays a role. This form of coded, indirect communication was a hallmark of Shakespeare's art and still continues today in the staging of his plays. I can still remember getting invited to a conference in Weimar in East Germany in the 1980s, where students were staging "Hamlet." One scene is about a trip to Paris. In the production, the king produced an East German passport with a visa for France. In the darkness of the theater, I could hear the people around me gasp, but when I looked around, there was nothing to be seen on their faces. They were used to reading signs and not allowing themselves to be noticed.

DER SPIEGEL: This year marks the 30th anniversary of the fall of the Berlin Wall. The 20th century, which was so strongly shaped by totalitarian rule, ended with a triumph of democracy that, it was hoped, would prevail fully in the 21st century. How did we get to a point where we are forced to use symbols when communicating with each other again?

Greenblatt: Of course, in Western democracies, we no longer have to communicate as indirectly as Shakespeare once did out of sheer self-protection. We have other options. Let me outline two ways of silencing people. You have the methods favored by old authoritarian regimes and still in use in certain places: They massacre enemies as they did in Shakespeare's day. With the authoritarian regimes of our time, we are seeing frightening relapses into this old pattern. Here, I'm thinking of a reporter who didn't shy away from speaking openly about his government, went to his consulate and was cut to pieces there ...

DER SPIEGEL: The suspicion that journalist Jamal Khashoggi was murdered last year at the Saudi Arabian Consulate in Istanbul at the behest of the Saudi crown prince, right?

Greenblatt: But this is no longer the principal way that regimes deal with their enemies. The interesting thing is that Western democracies don't even have to use force to silence people today -- they can use other methods, like producing such tremendous noise that dissenting voices, which are already having an increasingly difficult time getting through, are no longer heard at all. People look where the most noise is coming from. And the 21st century produces such an overwhelming cacophony that it is almost deafening to listeners -- a certain person, for example, tweets every day. Like us, Shakespeare lived in a time of upheaval and new media, which also included his theater. He self-critically examined how this medium could be used. And we should do the same with our new media.

DER SPIEGEL: Didn't your book also expose you to the noise surrounding Trump?

Greenblatt: On the contrary. For me it was a way to escape the noise and think in peace. I spoke with a friend, a German by the way, about what someone like me could do in light of the current situation. He said: "Write." And I wrote about what I knew best.

DER SPIEGEL: So, if, as you suggest, democracy is also paving the way for tyrants, then what good is it?

Greenblatt: There will always be sociopaths. Shakespeare's Richard III is a narcissist with a soul you can almost imagine as a hall of mirrors -- think of him talking to himself: "Richard loves Richard; that is, I and I." His inner life is warped and shriveled. The problem is not a warped self, but conditions that make the rise of these types of people possible. I still very much place my hopes in democracy. It is the best way we have of avoiding nightmares like the ones we are currently experiencing. But it needs some work. Trump had nearly 3 million fewer votes than Clinton and yet he still became president. There's something wrong with our system.

DER SPIEGEL: It sounds like there's still at least a hint of optimism in your voice.

Greenblatt: I'm optimistic, but not, shall we say, boundlessly optimistic. With Shakespeare, the traitors, the tyrants and also their minions eventually fail, which is caused by themselves, but also by a humanity that can be brought low but never completely destroyed.

DER SPIEGEL: Shakespeare is regarded as one of the creators of the modern image of humanity, because his figures seem ambivalent, often even torn. Hamlet, for example, suffers from the burden of his guilt. Going by Shakespeare, how does a person become a tyrant?

Greenblatt: Shakespeare's view of the tyrant's character changes from one work to the next. He kept finding different and often better language for describing the inner turmoil. Richard III is a tyrant in a more one-dimensional way than Macbeth. But already here, in the early and in some ways crude history play, Shakespeare suggests that there are psychological reasons -- reasons rooted in childhood, in sexuality, in a blend of narcissism and fear -- why someone develops the personality type of a tyrant.

DER SPIEGEL: German readers of your book have drawn parallels not only between Shakespeare's rulers and Trump, but also between your characterization of Elizabeth I and Angela Merkel. You describe the late Elizabethan age in which Shakespeare lived as turbulent: Elizabeth's relatively stable rule was coming to an end, she was tired, many around her speculated about her succession, and many fought for it. Is Merkel a modern-day Elizabeth?

Greenblatt: It doesn't surprise me that Germans interpret it this way, but this parallel was not intentional. Incidentally, it doesn't appear that Shakespeare ever saw a tyrant in Elizabeth given her respect for political institutions and sense of the limits of her power. Part of the unrest of that time was based on the widespread fear that things wouldn't get any better after she was gone.