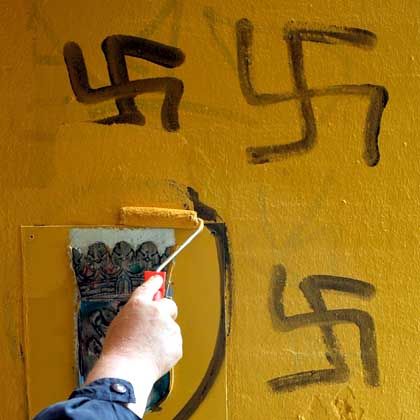 The janitor at Berlin's Jean-Piaget high school in the Hellersdorf neighborhood paints over swastikas scrawled on the walls in May, 2006.

The Jewish High School in Berlin's central Mitte district resembles a high-security ward. Those who want to access the imposing old building on Grosse Hamburger Strasse have to pass through a meticulous security check. The building is surrounded by a fence several meters high and video cameras register every move. Policemen stand guard in front of the building.

"We're no ghetto," school director Barbara Wittig clarifies. "We offer those children protection who have to fear discrimination at other schools," she adds. And such cases have increased dramatically in the past two years. "I always though Jews were integrated into German society," says Wittig. "I would never have thought it possible for anti-Semitism to express itself as virulently as it has recently."

As of this week, Wittig's students have included two girls who previously attended the public, non-confessional Lina-Morgenstern High School in Berlin's Kreuzberg neighborhood. Their woes attracted considerable public attention. For months, one of the two girls, who is 14 years old, suffered anti-Semitic insults from adolescents with an Arab background. They also beat her and spat on her. Walking to school became like running the gauntlet for her. Her tormentors would hide in wait for her and chase her through the streets. In the end the girl had to be given police protection on her way to school.

Anti-Semitism on the rise

These events in Kreuzberg represent an especially drastic example, but they're not the exception. Berlin's state parliament lists 62 reported cases under the category "(right-wing) extremism" in its study "Indicators of Violence at Berlin's Schools, 2004/2005." That's a steep increase in comparison with the previous year, when only 39 cases were registered. The category "(right-wing) extremism" includes "anti-Semitic, racist / xenophobic and right-wing extremist remarks" by children and adolescents, in addition to remarks that "incite racial hatred or express fundamentalist / Islamist fundamentalist views."

One high school student in Berlin's Steglitz-Zehlendorf district said in class: "All Jews must be gassed." Students in the Friedrichshain-Kreuzberg district locked another student inside the chemistry lab and said: "Now we'll turn on the gas." A non-German child at an elementary school in Treptow-Köpenick insulted his teacher by calling her a "Jew," a "witch" and a "sea cow." When a teaching aid in Friedrichshain-Kreuzberg tried to settle an argument between students, he was told: "Piss off, Jew!"

This week, in the town of Grimmen in West Pomerania, right-wing adolescents mobilized against an exhibition on Anne Frank, disparaging her diary as a forgery. In October, several adolescents in Parey, a town in Germany's Saxony-Anhalt region, forced their 16-year-old classmate to walk across the school yard wearing a large sign during lunch break. The sign read: "In this town I'm the biggest swine / Because of the Jewish friends of mine." It's a phrase from the Nazi era, used to humiliate people with Jewish friends.

A teacher intervened, took the sign away and called the police. The students responsible for the incident, who are aged between 14 and 16, are under criminal investigation. The charges are incitement of racial hatred, coercion and defamation. One of the students is also accused of assault.

Berlin's Jewish community has already issued warnings about "a new dimension of anti-Semitism." Jewish children increasingly face the hatred of Muslim adolescents in addition to aggression from right-wing extremists. The Jewish community advises parents to send their children to Jewish schools in case of conflicts, pointing out that there they will at least be safe.

Skullcaps hidden out of fear

But the protected zone ends outside the school walls. A school class from the Jewish High School was exposed to massive anti-Semitic insults by another Berlin school class while riding the subway. Religious Jewish adolescents hide their skullcaps under a hat whenever they venture onto the street.

The incidents prompted Peter Trapp, a member of the Christian Democrat Party (CDU) in Berlin's parliament, to submit a formal query: Trapp wants to know how many such incidents have occurred recently. He also wants to know how many of those incidents can be attributed to "the right-wing extremist camp" and how many can be traced to adolescents "of non-German origin." Trapp has yet to receive a reply -- indeed, the CDU complains that it is taking unusually long.

And yet school director Wittig insists that politicians are very much making an effort to respond to the problem. It's just that she rarely gets through to them with her projects and appeals, she says. Wittig also complains that many Arab adolescents are so pig-headed it's hard to get through to them. "And the teachers allow their students to tell Jewish jokes," she adds.

"Students are increasingly using the word 'Jew' in a pejorative sense. It's climbed up a long way on the ranking of popular insults," reports Peter Wagenknecht from the Kreuzberg-based project "Educational Building Blocks Against Anti-Semitism." Wagenknecht and his associates educate adolescents about anti-Semitism in specially organized workshops and classroom talks. The project still receives financial support from the German government.

But not everyone who uses the word "Jew" as an insult is automatically an anti-Semite, Wagenknecht says. Many people just act thoughtlessly, in his view. "Many students no longer have a sense of how charged the word 'Jew' is when it's used as an insult. They just want to break a taboo." Wagenknecht points out that some students similarly use the word "victim" as an insult intended to stigmatize someone as weak.

When he started to work with young people during the early 1990s, anti-Semitism wasn't a problem, Wagenknecht explains. He traces much of today's anti-Semitism to two sources: Students from Arab or Turkish families have been politicized by the conflict in the Middle East such that their "anti-Israeli" attitude sometimes crosses over into open anti-Semitism. German adolescents with extreme right-wing tendencies, on the other hand, have often been exposed to right-wing ideology and hence dispose of a correspondingly distorted knowledge about Jews and Jewish culture.

Wagenknecht worries that more and more Jewish students are too afraid to openly stand up to their background: "They don't want to present themselves as Jewish. In such cases, the class often doesn't know about their background, and the teachers keep mum." Wagenknecht adds that the students are often acting on advice from their parents, who want to spare their children conflicts and exposure to aggressive behavior.

School director Wittig says: "We're now the only school in Berlin where Jewish children can stand up to their identity. Elsewhere, most of them have to adapt to the majority."