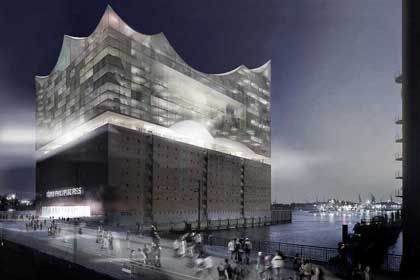 Herzog and de Meuron's design for the Elbe Philharmonic.

The German port city of Hamburg -- best known as one of Europe's biggest ports and media centers -- is set to gain fame as an architectural attraction. At least that's what city officials hope. Since 1997, the city has been undertaking an ambitious development of a major section of its harbor area as a means of extending its city center by 40 percent. Technology has allowed the port to increase its productivity and container-processing capacity to the point that the city has actually been able to grow the port's output while at the same time shrinking its physical size.

For now, the results of the project, known as "HafenCity," or harbor city, are mostly just lots of sand and gravel, but eventually, 5,500 new apartments are to be built, along with sleek new business and retail space, a new school, a maritime museum and an aquarium. And now, star Swiss architects Jacques Herzog & Pierre de Meuron -- winners of the 2001 Pritzker Prize and hot from their success at building Munich's new Allianz Arena -- are hoping to erect an ephemeral-looking 196 million concert hall called the "Elbe Philharmonic." The hall is to be placed on top of an old warehouse and at night, will be lit up to look like a castle floating on air. 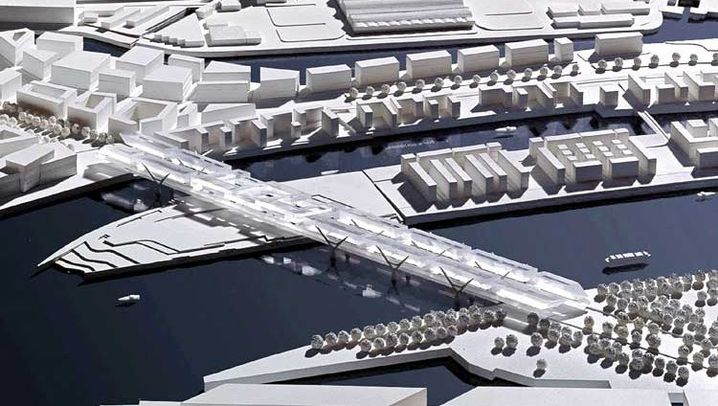 The strange part about the architects' plan, however, is that they totally circumvented normal channels in order to push it through. Instead of proposing it to the city and undergoing standard competition with other architects, the men got backing from a private investor and went straight to the press. Naturally, the idea became an immediate media darling. The whole scenario has left city officials a bit flummoxed and in a strange grey zone between what is allowed and what is good for the city. And certainly an architectural wonder -- as the 37-meter-tall (120 feet) Elbe Philharmonic promises to be -- would be good for the city's image. Officials are set to vote on the project on July 12, but as it now stands there seems to be little doubt that it will move forward.

Another exciting new project proposed for Hafencity is called the "Living Bridge," designed by Hamburg architect Hadi Teherani. The 324 million, five-story bridge would span the Elbe River and include luxury apartments, shops and other businesses.

Albert Speer, 70, son of Nazi architect and war criminal Albert Speer and now a respected and established architect who is himself developing plans for HafenCity, has nothing but praise for Hamburg's plans. "In Germany right now, Hamburg is presenting itself better than any other city. Other metropolises should use it as their example."