There's something hypnotic about the steady flow of people crossing the Simon Bolivar Bridge. Like a pack of sleepwalkers, they trudge across the border between Colombia and Venezuela. The look on their faces is highly concentrated and their legs move as if remote-controlled. Their pace is remarkable.

Under a scorching sun, they schlepp heavy sacks and dozens of creaking plastic bottles on their backs. Each one prepares to present their identity papers, though the border guards conduct only sporadic checks.

As many as 70,000 Venezuelans cross the border into Colombia near the city of Cúcuta every day. One of the largest migrations in the history of Latin America is taking place here. Around 4.5 million Venezuelans have already left their country. Some 1.4 million have settled in Colombia, and another million are expected.

They have formed one of those "streams of refugees" that right-wing populists are wont to cite when they need to stir up people's fears. Venezuelans are still welcome in Colombia, but that could change at any moment.

In Colombia, hundreds of thousands of people recently took to the streets to protest against President Ivan Duque. The government fears a loss of power and control. Relations with Venezuela are at a low point and both sides use border closures as a means of political pressure. Colombian President Duque is also fomenting anger by suggesting that Venezuelan provocateurs are being smuggled across the border.

In fact, it's mostly the sick, hungry and job seekers who come from Venezuela. And not everyone wants to stay in Colombia. Around 3 million Venezuelans have already received a migration card that allows them to move freely around the country for seven days, or to travel to another country. Many commute, look for short-term work and then return home with food and medicine. One such person is Noemi, a 42-year-old mother of five with eight grandchildren.

She looks like a movie star, except that she's sitting with hundreds of other people in a soup kitchen run by the Catholic Church in the town of Villa del Rosario near Cúcuta. She waits patiently for a plate to be handed to her. It's one of 6,500 that are given out each day -- not counting children's portions. 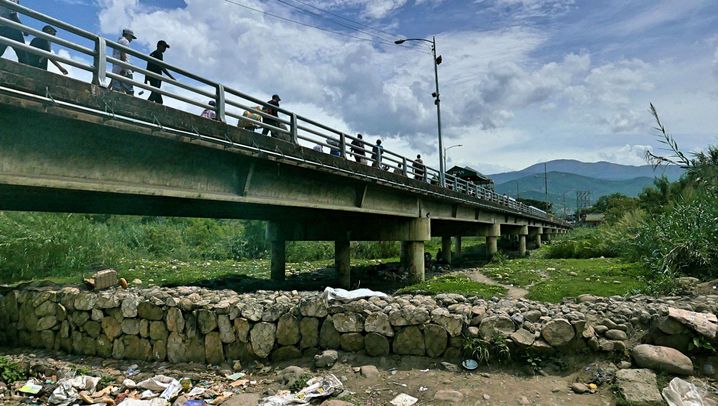 For four months, Noemi has regularly made the journey from the Venezuelan port city of Puerto Cabello some 740 kilometers (460 miles) away. She tries to work as a day laborer, carrying things back with her that are scarce in her home country in order to sell them. "In Venezuela, everything is lacking: food, clothing, medicine -- and peace," Noemi says. Many people have already died. The situation is dire.

Venezuela's socialist president, Nicolas Maduro, has managed to run the country with the largest oil reserves in the world into the ground. While the government buys weapons from Russia for billions of dollars, people starve. They lack antibiotics and insulin. Because hundreds of thousands of children aren't vaccinated, there's been a resurgence in diphtheria and measles. Malaria, too, is on the rise again. Noemi has a 15-year-old son whose growth is stunted due to malnourishment.

A Euro a Month

People sell anything they can to survive. Some sell their hair, while others -- according to reports in the local newspapers -- sell their own children. When asked whether the fathers of her children support them financially, Noemi just waves her hand dismissively. Single women have a tough time, she says -- there are sexual assaults, while some desperate Venezuelan women turn to prostitution to provide for their children. Roughly 300 women and girls sell their bodies in Cúcuta's Mercedes-Abrego-Park -- for the equivalent of 5 to 7 euros. "The police are corrupt and no one helps the women but the church," Noemi says.

"In Colombia, I can earn 5,000 pesos a day, or around 1.30 euros," Noemi says. When she can't find a job, she has to sleep on the street. Nevertheless, she keeps coming back. In Venezuela, where hyperinflation is rampant, she would only earn about a euro a month.

There are many ways to get to Colombia. The official one is across the bridge. The unofficial one, known as trocha, is through the jungle. There's also a wall over which smugglers -- muscular young men with baseball caps and tattooed torsos -- bring their goods into Venezuela. All kinds of things get smuggled, from money and people to gasoline for making cocaine.

"The refugee crisis is an immense challenge for Colombia," says Felipe Munoz, the government official in charge of Colombia's border with Venezuela. "We're concerned about illegal activities that are taking place with the knowledge of the Venezuelan police at the border."

Organized criminal gangs, as well as guerilla groups like FARC and the Marxist National Liberation Army (ELN), use the lawless space for their purposes. "We can't control 2,200 kilometers of border," Munoz admits.

A Moral and Historical Debt

An estimated 2 million Colombians emigrated to Venezuela in the 1970s and '80s because of the oil boom there. The two countries are more than just neighbors -- they're more like family. That helps to explain why little xenophobia has been observed in response to the recent wave of migrants. Educational campaigns in schools also take place to stay one step ahead of any possible ethnocentric hostility.

"I find it exemplary how responsible and supportive a large part of Colombian society is toward migrants," says Sabine Kurtenbach of the GIGA Institute of Latin American Studies in Hamburg. Unlike in Ecuador or Peru, where there have been anti-refugee riots, family ties and dual citizenship have provided for a more fraternal relationship in Colombia.

Before local elections in October, the parties in congress agreed to avoid xenophobic rhetoric during the election campaign so as not to jeopardize social peace. Munoz says some 600,000 applicants have already received permanent residency permits. Furthermore, children born in Colombia to Venezuelans will automatically be granted citizenship and the private sector will be opened up to Venezuelan workers. There are also around 200,000 refugee children who must be educated, which will be a significant challenge, Munoz says.

The massive protests against the Duque government, however, are causing a sense of nervousness. When a quarter of a million Colombians recently took to the streets across the country to protest violence, austerity measures and a lack of reforms, they temporarily forgot their migration-friendly attitude. The government briefly closed 12 border crossings, including the one at the Simon Bolivar bridge -- for security reasons, the official line went. Fifty-nine Venezuelans were also deported, allegedly for vandalism.

This, in turn, resulted in some people agitating against Venezuelan refugees on social media. They were overburdening the healthcare system, it was said, plus they took jobs away from locals. UN representatives on the ground immediately condemned any form of discrimination against the Venezuelan population and expressed concern at the growing xenophobia.

The goodwill of the Colombians, who have shown such solidarity so far, seems to be waning. A survey for the Venezuela Migration Project showed that Colombians' willingness to accept refugees from their neighboring country had fallen by 14 percentage points to 51 percent. More than 40 percent of Venezuelans surveyed reported having experienced some form of discrimination.

"The problem has gotten worse since the two governments stopped communicating," Socorro Ramirez, a migration researcher, told the newspaper El Espectador. Venezuela's infrastructure has fallen into disrepair, diplomatic relations have been broken off and consulates closed. "What was once in the government's hands is now being controlled by irregular groups," Socorro said, adding that life on both sides of the border was now subject to illegality.

What would happen if Colombia closed the border? "That would have fatal consequences," Noemi, the Venezuelan commuter, says. "Then we'd all have to cross the river -- and that would be dangerous in the rainy season." The trocha, the secret route across the border, is a lifeline for many people. "If it gets cut off, the result will be violence and riots," she says.

And in the long run? "Then Venezuela would explode," says the bishop of Cucuta, Victor Manuel Ochoa Cadavid. The country depends on imports. "Currently, it produces only 3 percent of what it needs," he adds.

The problems are dramatic on both sides of the Simon Bolivar bridge. Nevertheless, Bishop Cadavid firmly believes in the Colombians' willingness to help. "Our people are close. We share the same culture, we sing the same songs and we drink the same beer," he says.

What works on a human level seems to be becoming increasingly difficult on a political one. The government's migration commissioner, Christian Krüger Sarmiento, resigned on Dec. 8, supposedly for personal reasons.

In a statement issued as he stepped down, he urged others to not allow themselves to be defeated by "routine, conformism and despondence." He added: "Our country's migratory history has only just begun." 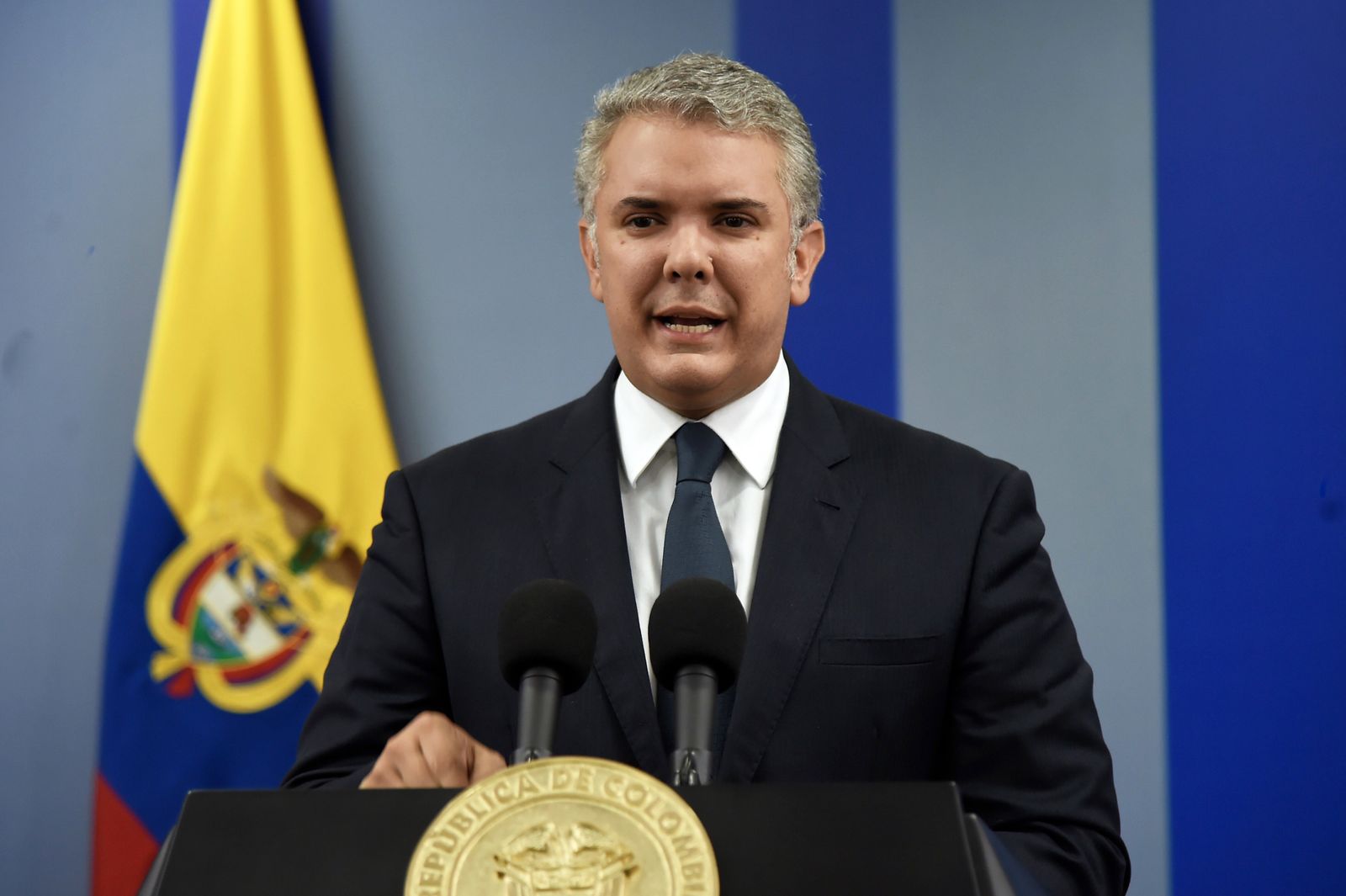 Colombia's right-wing conservative president, Ivan Duque, has hesitated to implement the demands of the agreement and, as a result, has been hemorrhaging support among the population.