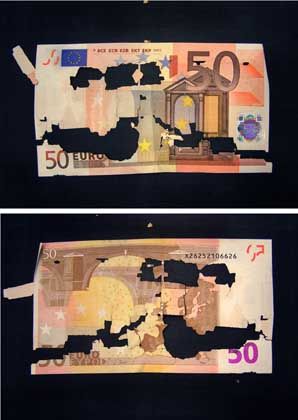 Now you see it, now you don't: What is causing €50 notes to disintegrate?

Since its introduction, the euro has served as a remarkably solid common currency for much of Western Europe. But lately, euro notes have proven to be less reliable -- indeed, they are disintegrating right in the hands of their holders. Introducing the case of the vanishing euros.

Since the first decomposed €20 bill was reported by a state bank in Berlin on June 21, a total of 17 cities have sounded the alarm about disintegrating euros. Authorities in a number of German states as well as the European and German central banks are now investigating.

According to the mass-circulation Bild newspaper, chemical experts believe "the destroyed bank notes came in contact with sulfuric acid, which led to the observed disintegration." They believe the bills were somehow coated -- either deliberately or through a manufacturing error -- with sulfur salt. Contact with perspiration (like sweaty hands) can trigger a chemical reaction that turns sulfur salt into corrosive sulfuric acid over time.

Though the authenticity of the bills has been proven based on their serial numbers, officials have ruled out the possibility of a production error at Germany's federal printing plant.

That's what has people scratching their heads. "Maybe a racketeer is behind all of this, someone who wants to prove to us that he can destroy the euro," an unnamed European Central Bank source told Bild. "But so far, no one has announced anything in this regard."

It could have been anything -- even an accident. "We still haven't been able to determine whether this was an unintentional chemical spill or whether it was a conscious manipulation," a spokesman from the Bundesbank, Germany's central bank, said.

In the meantime, the euro bills continue to disintegrate and officials are baffled.