The United States lost a long battle when Russia, as it announced on Monday, delivered nuclear fuel to an Iranian power plant that is at the center of an international dispute over its nuclear program. Iran, for its part, confirmed on Monday plans to build a second such plant. 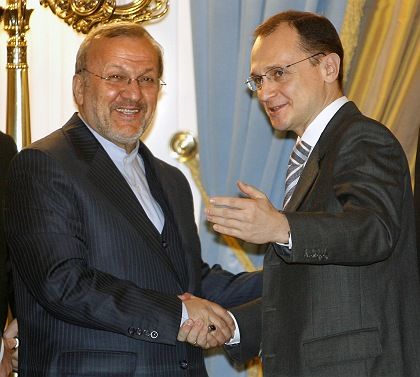 In announcing that it had delivered the first shipment of enriched-uranium fuel rods to the power plant, at Bushehr in southern Iran, on Sunday, Russian officials said that while the fuel was in Iran, it would be under the control of the International Atomic Energy Agency, the nuclear monitoring agency for the United Nations. Russia also said the Iranian government had guaranteed that the fuel would be used only for the power plant.

The Bush administration took pains not to criticize the Russian move publicly, even expressing support for outside supplies if that led Iran to suspend its nuclear enrichment program.

But from the American standpoint, the timing could not have been worse, coming just two weeks after the release of a United States intelligence estimate that concluded that Iran stopped its nuclear weapons program in 2003. The National Intelligence Estimate also concluded that Iran had not restarted its nuclear weapons program as of mid-2007, undercutting a central tenet of the Bush administrations basis for maintaining international pressure against Iran.

While administration officials maintain that the intelligence estimate does not mean that the United States and its allies should ease the pressure, the practical consequence of the report has been to embolden Iran. It has also made it more likely that China and Russia, two of the countries with perhaps the smallest appetite for sanctions against Iran, will not agree to a new round of tough sanctions by the United Nations Security Council.

Russias decision to deliver fuel to Bushehr further encourages Iran, several administration officials and European diplomats said privately. They did not speak for attribution because they had not been authorized to discuss the matter publicly.

The White House took a different tack in its comments. There is no doubt that Russia and the rest of the world want to keep Iran from getting a nuclear weapon, said a White House spokesman, Gordon D. Johndroe. And todays announcement provides one more avenue for the Iranians to make a strategic choice to suspend enrichment.

But privately, administration officials said they had been hoping, with dwindling confidence, that Russia would continue to stall on delivering the fuel, in part to send a message to Iran that the United States and its European, Chinese and Russian allies were hanging tough in their attempts to punish Iran for refusing to suspend enrichment.

We for many years tried to stop it, and for the last year weve known there was no way to stop it, and that it was coming, and we held our breath on the timing, a senior administration official said.

Indeed, Iran said it had no intention of suspending its uranium enrichment just because it had received the fuel shipment for Bushehr, and it even confirmed that it intended to enrich uranium for another new nuclear power plant in the south of the country, the Fars news agency reported. 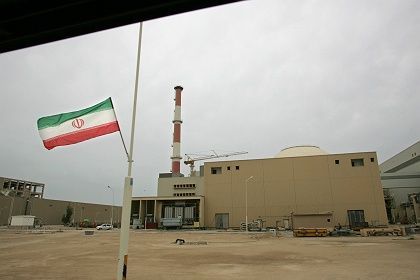 An Iranian flag is seen outside the building housing the reactor of the Bushehr nuclear power plant.

Gholamreza Aghazadeh, the chief of the Iranian Atomic Energy Organization, said Iran needed to produce fuel for a second plant under construction. We are building a 360-megawatt indigenous power plant in Darkhovin, Mr. Aghazadeh said.

The fuel for this plant needs to be produced by Natanz enrichment plant, he added, according to the news agency.

Darkhovin is a city in the southern province of Khuzistan, north of Bushehr, which is better known for its oil fields. Natanz is the site where Iran has been installing centrifuges for uranium enrichment.

Both Bushehr and Darkhovin were projects planned before the 1979 revolution, and then abandoned. It was not clear how much construction had been carried out at Darkhovin.

Construction of Bushehr has been hindered by repeated delays, most of them a symptom of Russias uneasiness about Irans nuclear intentions, European and American diplomats said. This year, Russia delayed a fuel shipment expected in March, accusing Iran of tardiness in making its monthly payments of $25 million. At the time, Bush administration officials privately expressed satisfaction about the delay and attributed Russias move, in part, to its desire to help the West pressure Iran into more openness about its nuclear program.

Last week, Sergei Shmatko, the director of Atomstroyexport, the Russian contractor responsible for the plant, announced that Russia and Iran had ended their financial disputes over the project, although he did not indicate a date for when the long-awaited opening would occur.

Irina F. Esipova, a spokeswoman for Atomstroyexport, said Bushehr would be ready technically to operate no sooner than six months after all the uranium fuel rods needed to power the station were delivered.

The United States had already agreed in principle that it was acceptable for Russia to provide the fuel to Iran, as long as there were safeguards to handle the spent fuel. Administration officials said they decided that the United States had no choice but to concede that it could no longer keep prodding Russia to delay shipping the fuel.

But when I was under secretary for arms control, we spent a lot of time trying -- successfully -- to convince the Russians not to ship the fuel, John R. Bolton, the former United States ambassador to the United Nations, said in an interview on Monday.

He said he believed that Russias latest actions reflected a change in the people who were dealing with Russias nuclear program, a change of heart by President Vladimir V. Putin and the economics of the deal.