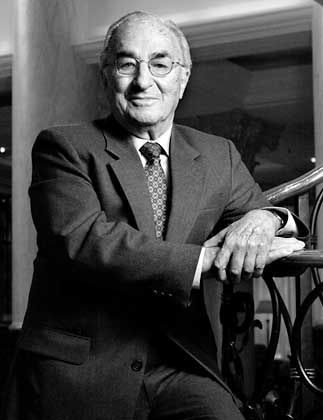 Ernest W. Michel worked as a reporter after surviving Auschwitz. His byline: 104995.

SPIEGEL: Mr. Michel, what are your impressions of the beginning of the World War II?

Michel: It was Sept. 2, 1939 and an SS man appeared in the doorway. He looked at me and asked: Ernst Michel? I nodded and he then said: Be at the train station tomorrow morning at six oclock. I tried to ask a question, but he just said: Shut up. That evening was the last time I ever saw my parents. The next morning I was taken to my first camp, Fürstenwalde, to work on the potato harvest. Later I was taken to another camp in Paderborn.

SPIEGEL: What did you have to do there?

Michel: All kinds of things: I collected garbage, cleaned streets. We werent treated so badly there. At least not compared to how we were treated in Auschwitz later. We just had to work very hard. After about nine months I was then taken to Auschwitz in a cattle train. The journey lasted four days and five nights. I had never heard of Auschwitz before, so I didnt know what being taken there meant. There was such a strange smell in the air.

SPIEGEL: You have said in the past that you dont really like talking about Auschwitz.

Michel: Oh, you know, in a private conversation it isnt so bad. But I really dont like discussing it publicly. Auschwitz was quite simply hell. To this day I still dont know how I managed to survive it.

SPIEGEL: Which part of Auschwitz did they bring you to?

Michel: To Monowitz, which is where they built Buna, the factory for making synthetic rubber. One day I was hit over the head by a member of the SS, the wound got infected and started to fester. So I was forced to go to the camp hospital, which normally you would avoid at all costs, as being there was incredibly dangerous. But I didnt have any choice. While I was in the hospital a well-dressed gentleman turned up looking for people who had very good handwriting, which I did.

SPIEGEL: What did you have to do?

Michel: I had to write documents and fill out death certificates. Of course the reason for death we had to give was never the gas chamber. We wrote physical weakness or heart failure

SPIEGEL: Although that was also responsible for killing many prisoners.

Michel: Of course. My best friend, Walter, died like that in the camp hospital right before my eyes. I knew him from Mannheim. Whenever I talk about Auschwitz today, its partly because I swore to myself that his suffering should never be forgotten.

SPIEGEL: After the war you covered the Nuremberg trials for a news agency. Did you ever let on to your readers that you yourself had been in Auschwitz?

Michel: Yes. The by-line which I used on my articles was Special Correspondent Ernst Michel. Auschwitz number 104995. I left it up to the newspapers to decide whether they wanted to use it or not. Some editors left it in, and of course others decided not to.

SPIEGEL: A reporters coverage should be as objective as possible, and free of personal emotions. Was that even possible for you?

Michel: Its true that it was very, very difficult. But I did it. I had to. You know, they all sat just meters away from me: Göring, Hess, Keitel, Kaltenbrunner, Streicher. There were times when I wanted nothing more than to jump up and grab them all by the throat. I kept asking myself: How could you do this to me? What did my father, my mother or my friend Walter ever do to you? But then one day Görings lawyer suddenly came up to me during a trial recess, and said that Göring wanted to personally meet this Auschwitz prisoner, Ernst Michel, whose articles kept appearing in the paper.

SPIEGEL: Were you even allowed to interview one of the accused?

Michel: No, of course not. The lawyer had me promise that I would not write one line about this meeting. So we went to Görings cell and the door opened. Göring smiled, came up to me and wanted to shake my hand. At that moment I suddenly froze. I couldnt move. I looked at his hand, his face, and then his hand again -- and then just turned round. I couldnt do it. I just couldnt speak to this man. Not one single word.

SPIEGEL: Did you later regret not having spoken to him?

Michel: No. It was a completely normal reaction. This man was the highest-ranking Nazi still alive. But I can still remember the astonished expression on Görings face when I walked out of the cell. A military policeman led me back outside. So that was my interview with Göring -- I bet no ones told you a story like that before, have they?