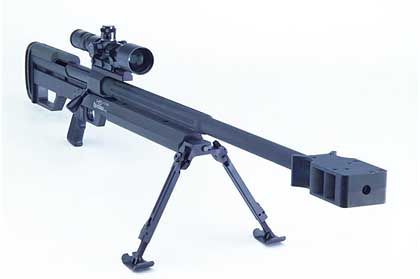 The Steyr HS .50 can pierce light armor from a distance of up to 1.5 kilometers.

It is considered one of the world's most modern and precise weapons -- the Steyr HS .50, made by Austrian weapons manufacturer Steyr-Mannlicher. The easily disassembled gun goes for about €4,000 in the Internet. And the buyer gets a deadly weapon that can penetrate basic armor at a range of 1.5 kilometers (just under a mile).

And they may now be in Iraq. According to a report in the Daily Telegraph on Tuesday, the US Army uncovered 100 of the weapons in a raid in Baghdad. Individual weapons, the paper writes, had already turned up in recent months, but now the number found has jumped to more than 100. Indeed, a Steyr HS .50 was reportedly used to shoot and kill a US officer in his vehicle.

"Obviously, if the reports are true, it would be profoundly disturbing," said William Wanlund, a spokesman for the US Embassy in Vienna, according to the AP.

If the reports are true, it is highly likely that the hoard of HS .50 rifles US authorities found came from a shipment that left Austria in late 2004. Eight hundred of the rifles were shipped to Iran with the express approval of the government of then Chancellor Wolfgang Schüssel. Steyr-Mannlicher, the manufacturer of the weapons, had filed a request with the Austrian interior ministry for approval to export the weapons a year earlier.

Officially the Austrian company's buyer was Iran's federal police force, specifically a special anti-drug unit. The Iranians claimed at the time that they needed the weapons for use in fighting the drug trade -- smugglers and dealers.

Concerned that these dangerous weapons could fall into the hands of insurgents and terrorists, the governments in London and Washington both tried to put a stop to the controversial sale, but were unsuccessful. Steyr-Mannlicher went through with the deal anyway.

The reaction came swiftly. In late 2005 the US government angrily imposed an embargo on the Austrian weapons manufacturer. Since then Steyr-Mannlicher, together with manufacturers from India and China, has been excluded from lucrative US government contracts.

The company remained stubborn. Wolfgang Fürlinger, the CEO of Steyr-Mannlicher at the time, made a public effort to downplay the dangers of the weapon, claiming that the HS .50 was less harmful than a pistol. He also insisted that the Iranian government had signed a so-called end-user certificate that ruled out the re-export of the guns.

Certificate or not, the Iranian weapons deal also triggered a heated political debate in Austria. The opposition party believed that the deal between Steyr and Tehran was everything but clean. Peter Pilz, a Green Party member of the Austrian parliament and his party's spokesman on security issues, even went so far as to call the deal "illegal."

Pilz argued that HS .50 was not a "toy weapon," as many had claimed, but that the rifle was in fact capable of piercing armor-plated vehicles and body armor from great distances. The HS .50, according to Pilz, hardly seemed designed for use in fighting the drug trade.

Responsibility lies with the Schüssel cabinet

The recent discovery of the Austrian weapons in Iraq has only served to confirm Pilz's initial criticism. Pilz assigns the blame for the politically sensitive deal to the cabinet of former Chancellor Wolfgang Schüssel, and most of all to Günther Platter, the then interior minister and current defense minister, former Interior Minister Ernst Strasser and Ursula Plassnik, Austria's former and current foreign minister.

Steyr-Mannlicher continues to fend off criticism of the deal. According to Franz Holzschuh, the company's new owner, the serial numbers of the weapons that were found in Iraq would have to be checked clarify the source of the rifles. The weapons found in Iraq, says Holzschuh, could also be imitations. After all, he adds, the patents for the HS .50 expired "years ago."