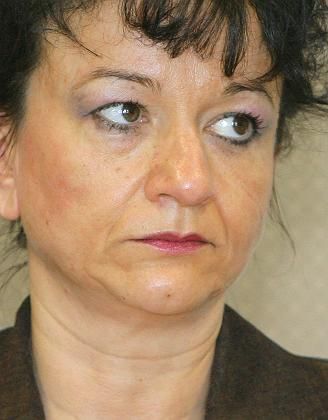 Sabine Hilschenz killed eight of her babies over a ten-year period, but how did friends and neighbors fail to notice?

Sabine Hilschenz, 40, an unemployed dental assistant from a small Brandenburg town in the former East Germany, was sentenced to 15 years imprisonment on Thursday for the manslaughter of eight of her children. The remains of the babies, born between 1988 and 1998, were discovered last summer in her parents' garden shed, buried in plant pots, an aquarium and an old bathtub.

Prosecutors had demanded a murder conviction but were unable to prove that Hilschenz had deliberately killed her children. She insisted she was so drunk when each child was born that she could not remember what had happened to them.

Her defense team argued that her alcohol consumption during labor would cause her to pass out. When she awoke, she would find the child dead and buried in soil on her balcony. "I would sit on the balcony and talk to them in the flowerpots," she told police before the trial.

Hilschenz already had three children and told investigators her husband did not want any more. Judge Matthias Fuchs, explaining the court's verdict in Frankfurt an-der-Oder, said Hilschenz had killed her children fearing "that her husband would abandon her and take the children with him."

Matthias Schöneburg, Hilschenz's defense attorney, said: "We don't know how long the babies lived, my client can't remember burying or concealing the children, which raises the question of whether someone else did it." He announced his client would appeal against the verdict.

The prosecution is also thought likely to appeal, disappointed by the decision not to convict Hilschenz of murder.

The bodies of seven girls and two boys were discovered after a neighbor uncovered human bones when clearing out Hilschenz parents' shed last summer. Hilschenz could only be prosecuted for eight of the killings due to Germany's statute of limitations.

The father of all nine children insisted he did not even know his wife had been pregnant, telling police he thought his wife simply had a weight problem. He declined to testify, as did three surviving children.

Questions remain as to how the killing spree went unnoticed by family and friends for so long. Jörg Schöbohm, Brandenburg's conservative interior minister, last year provoked outrage when he argued that the former East Germany had been brutalized by years of communist rule resulting in "proletarianization" and a degeneration of moral norms.