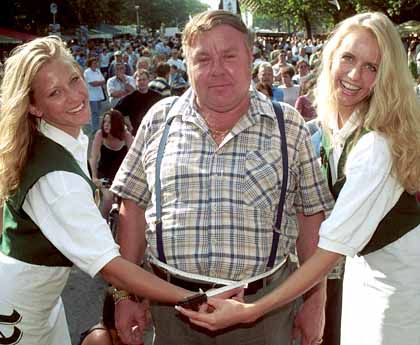 Southern Germans: Stupid, fat beer drinkers. And did those blondes come from Berlin?

What happens when a blonde moves from Berlin to Bavaria? The collective IQs of both places go up -- at least according to a favorite joke told in the German capital. And the Bavarians? They just call everybody not from their easy-going part of Germany Saupreussen, or "pig Prussians." In other words, not a lot of love is lost between the North and the South in Germany.

Some of it, no doubt, has to do with religion. Much of southern Germany is Catholic while the northern Germans are almost exclusively Protestant. But the primary issue is prejudice. People in the cool, practical, intellectual, industrialized, liberal north of Germany think the lazy hick farmers in the south are backward and racist, and they talk funny too. Berliners will even express hatred for the southern German mountains -- after all, they grunt, they make one feel claustrophobic.

People in the warm, hospitable, easygoing, earthy, rural south, for their part, figure the calculating northerners are just boring snobs. They are also sometimes called "flat-landers."

In short, northern and southern Germans mistrust each others food, each others dialects, each others politics, and each others religion. And southern German accents are so sing-song that movie distributors here subtitle accents from the American South in the southern-German dialect of Bavarian. Howdy, Earl, might be rendered as Grüß Gott, Earl! Ahd like me some hash browns, will likewise be faithfully translated to the slow, slightly ridiculous sounding Alpine dialect. Indeed, the fact that accordions and yodeling found their way from southern German regions into American country music may not be such a historical quirk.