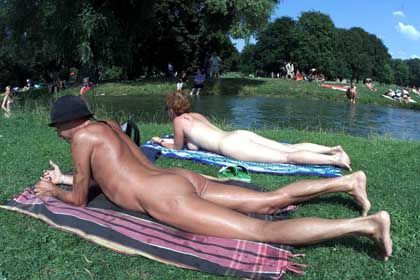 Welcome to the English Garden in Munich.

So we all agree that the photos of German Chancellor Angela Merkel's naked backside published in the Sun last month were out of line, right? The poor woman, after all, deserves her privacy.

Had that happened in the States, though -- George W. stripping down in the Rose Garden after a particularly strenuous mountain bike ride, for example -- the outrage would have been two-fold. Disrespect for the country's leader on the one hand. But on the other, folks would be asking themselves what the hell a president was doing disrobing in public. The Merkel photos, though, triggered no such questions. After all, stripping off is something of a German pastime.

You'll see naked Germans everywhere. Lying on the banks of the Isar River smack in the center of Munich. On the shores of the Havel on the outskirts of Berlin. In public parks. There's one perennially naked guy who wanders around Munich's English Garden like an ambulatory grandfather clock shocking foreign guests. His nickname is "The Hammer."

And then there's the sauna. Forget about trying to wear a swimsuit in a sauna. First of all, you'll be the only one with any sort of clothing at all. Secondly, you'll be immediately pegged as a prudish Anglo-American. No one stares, no one tries to make you feel awkward, but everyone in the room somehow knows to address you in English. Though there is also a decent chance that the sauna authorities will come around, pour water on the broiling sauna rocks, and demand in a brisk impersonal voice, Take off your clothes, please, no clothes allowed! Jawohl!

None of this should be surprising. Everyone knows that an average continental European will whip off his kit at the drop of a hat. But Germans are a breed apart. They were on the cutting edge of organized nudity already in the early 20th century. German sociologist Heinrich Pudor -- the so-called Father of Nudism -- wrote a tract called "The Cult of the Nude" in the 1890s, and a certain Paul Zimmerman opened the first known nudist camp near Hamburg in 1903. The idea was to resist the straitjacket of 19th-century social expectations by flinging away your armor of restrictive clothes. Along with vegetarianism, tee-totalling, clothing reform, and calisthenics, nudism belonged to a new, avant-garde cult of the body. So-called Freikörperkultur (free body culture) -- still known as FKK today -- got a further boost in the 1960s, with German students taking the bus to class completely in the buff.

The country is no longer quite the stitchless paradise it was then -- and some parks have reined in nudity and confined it to well-defined, and often secluded, sections. But whole families still go skinny dipping together in the country's numerous lakes and at the seaside.

Not that all Germans approve of exposed tackle. While Americans may think all Germans are exhibitionists, Germans from the former East think westerners are kind of uptight. Communism had nothing against nudity, and after the Wall fell, there were bitter clashes between easterners and westerners who disagreed about where it was okay to be naked on beaches along the Baltic Sea. The problem was solved with special FKK beaches; but some naked easterners still resent the new restrictions and make a point of wandering as close as they can to the clothed section to antagonize their clothed, western cousins. West Germans, wrote the Ostsee Zeitung -- based on the German Baltic Sea coast -- in 1999, are prudes.