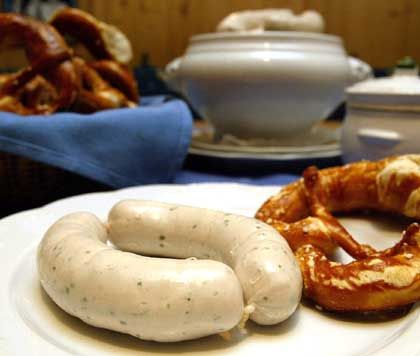 Weisswurst, a pretzel and a beer -- the Bavarian breakfast of champions.

When it comes to cuisine, Germany is at a disadvantage. Not that the country doesn't have good food -- it's hard to beat a juicy Bavarian pork roast with potato dumplings and tasty red cabbage. But it's often the names of the dishes that get German restaurants into trouble with foreigners. Some Leberkäse -- that is "liver cheese" -- anyone?

Travellers to Bavaria, though, should definitely not be put off by the ubiquitous "white sausage" present on the breakfast menu of every self-respecting southern inn or tavern. Of course, the very idea of an albino hotdog may be enough to put anyone off their meal and the traditional method of serving isn't terribly helpful: a white porcelain bowl filled with warm water and two meaty sausages floating inside like they were alive. But should you manage to avoid retching on the server's dirndl, you're in for a treat -- especially if you've decided to followed local custom by setting yourself up with a wheat beer, a pretzel and some sweet mustard.

However, once you've managed to fish a sausage out of the bowl, how to eat the thing? Or rather, knowing that a white sausage -- like most sausage -- is little more than spiced leftovers from the slaughter house crammed into a bit of pig intestine: to peel or not to peel? And if you decide to peel, how to peel? It's an important existential question that gets right to the heart of what it means to be a Bavarian -- a bit like whether Americans eat their corn on the cob across in typewriter style or around the cob in a circle.

One method involves slicing the sausage the long way and then rolling the innards out with a fork -- a tricky operation after a beer or two. A second method is a bit more fun -- cut the thing in half and then suck the meat out making as much noise as possible. The traditionalists at the pub you've chosen won't mind.

Those looking for old stuff in "Old Europe" though might want to choose something else off the menu. The Weisswurst is something of a new creation, having been invented by accident in 1857 by frustrated Munich butcher Sepp Moser. Having used up the last of the thicker skin he normally stuffed sausage slop into, he turned to some thinner skin he had lying around to satisfy guests clamoring to be fed. Worried that frying the thin-skinned sausage would cause them to burst, he boiled them gently for 10 minutes. And voilà, his guests were happy.

His original recipe, calf meat and bacon seasoned with herbs spices and -- most importantly -- lemon and parsley, is still followed religiously today. They're eaten mostly in Bavaria and are often used to define Germany's north-south divide -- sometimes called the "white sausage equator." But recently a Berlin butcher's Weisswurst were voted the best in country, shaming Bavarians beyond belief.