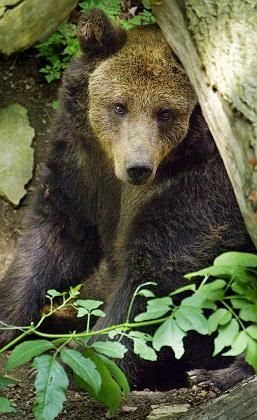 This brown bear may look coy, but don't be fooled by the shy Lady Diana gaze. She is more of a goer than you'd think.

If you are a brown bear, being a good mother doesn't preclude also being a bit of a tramp. In fact, according to a new study released on Wednesday, putting yourself about is actually the best way to protect your children.

A favored tactic of male bears to ensure that their own genes get passed on, is to kill the offspring of other fathers. This not only decreases competition for their own cubs, but also frees up the mothers to be fertilized again - but this time by them.

Faced with the infanticide tendencies of their males, mother bears have come up with a cunning way of preventing their cubs being knocked off: copulate with as many males as you possible can. While this may appear fun to some, and simply exhausting to others, it does mean that no one is quite sure who the father is. Hardly a classy approach but an effective one: The male bears hold back from killing the offspring just in case they end up wiping out their own genetic pool.

Although dramatic questions of paternity smack more of daytime telenovelas than of scientific experiment, researchers at the Austrian scientific research institute FWF say that 54 percent of female bears successfully use this strategy to protect their young. The findings were gathered by extensive observation of European brown bears in Scandinavia between 1984 and 2003. Male and female bears, as well their offspring, were equipped with radio transmitters and tracked to find out more about their, evidently rather busy, sex-lives.