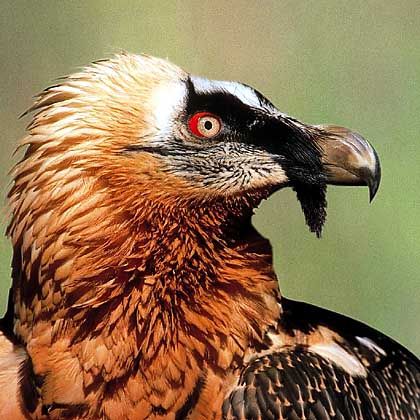 The bristles at the base of the beak resemble a beard and give the bird its name.

Portobello and Tauernwand aren't yet comfortable with their new-found freedom. The two bearded vultures, born and bred in captivity, seem wary as they slowly ascend to a height of 1,500 meters above the Seebachtal valley in the Austrian Alps.

Half an hour earlier rangers had hauled the birds up the mountain in wooden crates to their new home in a prepared nest. The birds are part of Europe's longest-running wildlife re-introduction scheme. Since 1986 zoologists in Austria, Italy, France and Switzerland have released 144 bearded vultures to the Alps.

They recently celebrated the 20th anniversary of the project. "Progress so far has been very pleasing," said Hans Frey of Vienna's Veterinary University who is coordinating the program. "The project proves that with persistence the re-introduction of wild animals can actually work."

The bird doesn't look like a typical vulture and is often mistaken for a Golden Eagle. It has a conspicuous red circle around the eyes and a wingspan of around 2.7 meters. A black strip over the eyes and the bristles at the base of the beak form the distinctive appearance of a beard.

Character assassination wiped out the Bearded Vulture in the Alps in the 19th century. The local population blamed the scavenger for the loss of lambs, goats and even small children. Hunters were offered rewards for shooting them and the last vulture living in the alps is believed to have been shot in 1913 in the Italian Aosta valley.

"The Bearded Vulture unfortunately never had a very good image," said Frey, adding that it didn't reserve its reputation because the birds aren't dangerous to living animals.

The bird feeds mainly on the bleached bones of dead goats and sheep. If the bones are too big, it drops them 50 to 80 meters onto plates of rock to shatter them, and eats the splinters. No other animal is capable of digesting bone which means that the Bearded Vulture has no competitors for its food. Its powerful stomach acids can dissolve even large bones.

By the beginning of the 20th century the "Bone Crusher" was virtually extinct in the wild in Europe. Then in the 1970s zoologists decided to try to re-introduce the bird to the Alps. "We managed to breed the birds again," said Frey, who manages Europe's largest vulture breeding station at Haringsee near Vienna.

In 1986 the first four Bearded Vultures were released in the Hohe Tauern national park. Since then birds have also been released in Switzerland's Engadin region, Italy's Stilfser Joch national park, and in the French Haute Savoie region, as well as the Maritime Alps. In 1997 the first of these birds bred and 33 chicks have been born in the wild so far.

"Conditions for Bearded Vultures are better now than 100 years ago," said Wolfgang Fremuth of Frankfurt's Zoological Society which co-financed the project. Less hunting takes place in the Alps, which means that there is more wildlife. And another problem appears to have been solved. "We were surprised, but the population has embraced the Bearded Vulture to an incredible extent."

Some 200 guests braved rainy weather to witness the release of Portobello and Tauernwind, which marked the 20th anniversary of the re-introduction program. Even local hunter Ferdinand Gorton praised the project. He said there had initially been some resistance to it. "But if one explains it well it becomes understandable even to the most simple hunter," he said.

"The return of the vulture means farmers won't have to remove dead animals," said Frey. In addition, many local hoteliers have discovered the bird as a tourist attraction. Biologists see other advantages. "Bearded Vultures together with other types of vultures are a natural form of waste disposal and are important for the ecosystem of the mountains," said Fremuth. Humans alone were to blame for their disappearance. "We have a duty to bring them back."

The plan could work. Around 100 of the released birds are known to have remained in the Alps. Almost 5,000 unpaid helpers regularly document their whereabouts.

Newcomers Portobello and Tauernwind are constantly monitored. They will soon leave the Seebachtal valley. Biologists hope that in four to six years they will return to the Hohen Tauern range to breed.

At that point the time may have come to stop the program and leave the Bearded Vulture population alone. "We hope we will be able to stop releasing animals from 2010 because the population is regenerating itself," said Frey. The project will have spent around €100,000 on each new vulture.

Frey recommends that future generations show more foresight. "Rendering a species extinct only to re-introduce it later is incredibly expensive. Wildlife protection pays off -- it's always cheaper in the end."