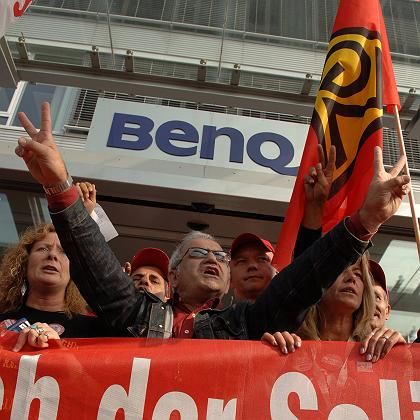 BenQ announced on Thursday it was cutting some 2,000 jobs in Germany.

The inevitable is happening at BenQ Mobile. Less than a month after filing for insolvency, the German mobile phone unit of Tawainese electronics firm BenQ -- which used to belong to Siemens -- is now laying off close to 2,000 workers in Germany. That's two thirds of its workforce in the company.

"After three weeks of intensive examination, it is clear that this is the only chance of keeping the firm together," said Martin Prager, administrator of BenQ's insolvency process. BenQ filed for bankruptcy on September 29 after deciding the unit could not be made profitable. The firm had accrued €600 million in losses from the German unit since buying it from Siemens in 2005.

Siemens has been under constant criticism about the layoffs -- the mobile phone unit was already in serious financial trouble when they sold it to BenQ. Siemens management maintains BenQ had a realistic plan to save the mobile phone unit and that the Taiwanese firm may have broken agreements that were put in place during the sale to protect employees from this very eventuality. Siemens' top executives have delayed their own salary hikes to help fund assistance to laid-off workers. Nevertheless, Siemens is being accused of ditching the mobile phone unit with little regard for its employees.

What happens next is unclear. A Friday roundtable has been called and many are urging Siemens to do its share to help the newly unemployed. Germany's IG Metall labor union has called for Siemens to provide €200 million in emergency help to those laid off by BenQ.

Meanwhile, frustration among those who have lost their jobs is intense. Most have been told that, while they'll be receiving pay checks until the end of the year, they no longer have to show up to work.

"It is absolutely inconceivable how people are being treated here," Besim Rekic, a 41-year-old who lost his job, told the news agency ddp. His colleague Iris Poljak agrees. "They do with us whatever they want," she said.