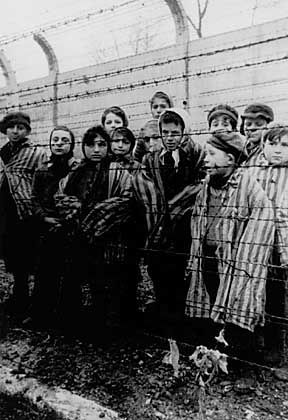 Over 6 million people were killed during the Holocaust. The group of children at the concentration camp Auschwitz seen here was liberated in January 1945 by Soviet troops.

The Iranian government insists that the conference it is currently holding in Tehran has nothing to do with denying the Holocaust. Instead, the two-day gathering, called "Review of the Holocaust: Global Vision," is intended to "create an opportunity for thinkers who cannot express their views freely in Europe about the Holocaust," said Iranian Foreign Minister Manouchehr Mottaki.

Rasoul Mousavi, head of the Foreign Ministry's Institute for Political and International Studies, which is hosting the conference, went even further in his opening remarks on Monday. The conference, he said "seeks neither to deny or prove the Holocaust. It is just to provide an appropriate scientific atmosphere for scholars to offer their opinions in freedom about an historical issue."

In other words, Iran is a bastion of free speech and all those who would question the "official" version of the Holocaust -- whereby Nazi Germany slaughtered some 6 million Jews during World War II -- represent an oppressed minority in Europe.

The rest of the world isn't so sure. It wasn't so long ago that Iran's President Mahmoud Ahmadinejad called for Israel to be "wiped off the map," called the country a "tumor" and referred to the Holocaust as a "myth." The guest list also leaves room for doubt. A number of right-extremist politicians from Germany's neo-Nazi NPD party were invited -- though Berlin has barred them from attending. David Duke, a former Republican state representative from Louisiana and a Ku Klux Klan leader, will be there. Sessions include one titled "Holocaust: Aftermath and Exploitation." Another is called "Demography: Denial or Confirmation?"

International condemnation of the even has been loud and clear. Israel's Holocaust Museum Yad Vashem issued a statement saying the Tehran conference is an attempt to "paint (an) extremist agenda with a scholarly brush." Moris Motamed, the one Jewish representative in the Iranian parliament, called the gathering "a huge insult to the Jewish community" in Iran, which numbers some 25,000. The United States has also condemned the conference, with the Simon Wiesenthal Center in Los Angeles planning to hold a teleconference during the conference focusing on individual stories from Holocaust survivors.

Germany, too, is holding a counter conference on Monday. While Thomas Krüger, head of Germany's Federal Agency for Civic Education -- which is sponsoring the event -- is wary of giving the Tehran gathering too much credence, he says: "The denial or questioning of the Holocaust cannot remain uncommented. We have to do what we can to counter this current before it begins to make inroads into our society."

Especially concerning for Krüger and the Germans is the fact that neo-Nazis in Germany have shown solidarity with Ahmadinejad and even waved Iranian flags during the World Cup tournament in Germany last summer. Indeed, Islamism and neo-Nazism are two sides of the same Holocaust denial coin, Krüger says.

Wolfgang Benz, head of Germany's Center for Anti-Semitism Research, says: "We have to say very clearly: This is what happened. Reality cannot be a matter for debate and does not belong in the political realm to be viewed according to one's political ideology."

The Tehran conference comes at a time when concern is growing in the international community that Iran is making strides toward developing a nuclear weapon. Over the weekend, Ahmadinejad announced that his country had begun installing some 3,000 centrifuges at a plant in central Iran, equipment necessary for the enrichment of uranium which can be used either in nuclear weapons or for the civilian production of electricity. "This is the first step toward industrial production," he said according to the Fars news agency.

Britain and France on Monday were planning to present a draft resolution to the United Nations Security Council calling for sanctions against Iran. The measures would be in response to Iran's flouting of an Aug. 31 deadline, imposed by the Council, to cease uranium enrichment.