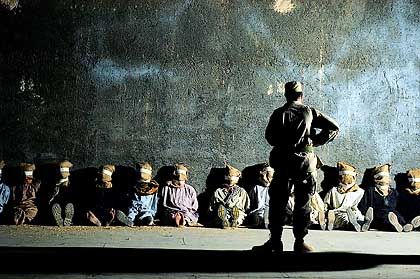 As scene from "The Road To Guantanamo" by Michael Winterbottom.

After the British government secured their release following a two-year ordeal at the notorious American Guantanamo prison camp for suspected terrorists, one of the first things Britain's so-called "Tipton Three" did was to file a lawsuit against United States Defense Secretary Donald Rumsfeld. The men denied any links to terrorism and claimed they had been tortured at the camp.

In their compensation claim, which is still pending, they alleged they had been "repeatedly struck with rifle butts, punished, kicked and slapped. They were short-shackled in painful stress positions for many hours, causing deep flesh wounds and permanent scarring." They also claim they were "threatened with unmuzzled dogs, forced to strip naked, subjected to repeated forced body-cavity searches and intentionally subjected to extremes of heat and cold for the purpose of causing suffering." They sued Rumsfeld because they believed their torture had been the "result of deliberate and foreseeable action taken by defendant Rumsfeld and senior officers to flout or evade the US constitution, law, treaty obligations and long established norms of customary international law." When they released a 115-page dossier of their treatment at Guantanamo, horrified representatives of the Red Cross claimed that if the allegations were true, they would be tantamount to war crimes.

Ruhel Ahmed, Asif Iqbal and Shafiq Rasul, all British Muslims, traveled in 2001 from central England to Pakistan where, according to their account, Iqbal was to meet and marry a young woman his mother had arranged for him in Islamabad. The other men were to serve as witnesses. But the young men got sidetracked in Karachi, where they answered the call of an imam at a local mosque for volunteers to travel to Afghanistan. What started as a bus trip into the neighboring country on the verge of war with the United States -- which they claim they took "one, for experience, and two, to help" -- would turn into an odyssey of "torture" and "degrading treatment" for the men. After arriving in Afghanistan, the men, who were all between the ages of 19 and 23, fell into the wrong hands and were eventually imprisoned and transported to the US prison for suspected terrorists at Guantanamo Bay, Cuba. Though never charged with any wrongdoing, the men were detained for two years until the British government, Washington's closest ally in the war on terror, negotiated their release.

During the months after their return to Britain, the Tipton Three's detailed accounts of the systematic abuse they allege they were subjected to at Guantanamo filled the media and captivated the attention of millions of Europeans. British filmmaker Michael Winterbottom was one of them.

No stranger to making movies about controversial issues, Winterbottom won the Berlin International Film Festival's top prize in 2003 for "In this World," which portrayed people fleeing Afghanistan by using real refugees as actors, and combined drama and documentary. His latest film, "The Road to Guantanamo," recounts the experiences of Tipton Three. "Guantanamo" has been tipped by many critics as a frontrunner in the competition in Berlin, one of Europe's top-three film festivals.

SPIEGEL ONLINE briefly caught up with Winterbottom and co-director Mat Whitecross on the sidelines of the festival this week.

SPIEGEL ONLINE: What compelled you to make a film about Guantanamo?

Whitecross: What drew us to this story is their account, which we read in the British newspapers -- it was so absolutely incredible. And all the most far-fetched elements were corroborated. It just seemed like an amazing adventure story that turns into a nightmare journey from hell.

Winterbottom: In a way its a very classic story -- ordinary people in very extraordinary circumstances, and they tell it in a way thats very engaging and matter of fact, so we tried to do that with the film. Were not making a political film - it doesnt discuss the politics, it doesnt attack anyone, it simply tells their story. Guantanamo was created in Cuba especially to avoid any sort of law. The reason its not in America is because it would be illegal to hold them there. So this place has been created as a sort of legal black hole where there is no recourse to the law. It is a nightmare place to be. If you see the story of three people who ended up there, it kind of reminds you that there are still 500 individuals being detained there. Theyre not weird crazed terrorists -- theyre people and they have the same rights as everybody else. The motto on the gates of the prison camp is Honor Bound to Defend Freedom. But you cant defend freedom by locking people up without justice.

SPIEGEL ONLINE: In the film, you combine interviews, news footage and re-enactments.  Do you have any concerns that people will not be able to distinguish between what is real and what is acting?

Winterbottom: We just wanted to tell the story in the best, most functional way possible. And it seemed important that the real guys were in it because we need to remember its a real story all the time. And also so people could get a sense of who they are. When we first met them, they told their story in an incredibly ordinary way. They talk about the diarrhea and the bad food, just like anyone would take a trip to Pakistan or Afghanistan. They dont have a political view to express, they dont want to put it in a more political context. They just say: This is what happened to me. You start off with them going to Pakistan for a wedding, theyre teenagers, very naïve, and they end up in Guantanamo as if theyre the most dangerous terrorists in the world.

SPIEGEL ONLINE: In the film, you show American soldiers abusing prisoners. Are you attempting to demonize the United States with this portrayal?

Whitecross: The fact is, were only re-creating what the boys told us. And the fact is that most of the guards they met and who were detaining them were extremely brutal. Thats the way they were treated. Of course, there were guards that treated them on a normal human level as well.

Winterbottom: This is not an anti-American film, America has lots of good things as well. There are lots of people who are anti-Guantanamo in the United States. Saying you want Guantanamo closed doesnt make you anti-American -- thats crazy.

SPIEGEL ONLINE: Will this film be shown in the United States?

Winterbottom: We hope so. The film was financed out of the United Kingdom, and we brought it to the Berlin International Film Festival in the hopes of selling it to as many countries as possible. And we hope to sell it to the US. In the end, the people who are going to close down Guantanamo are the US administration. Theyre the only people who can. So the more people who see it in America, the more people in America who are against Guantanamo, the sooner the day will come when it closes.

SPIEGEL ONLINE: Many might agree that Guantanamo is an unacceptable facility, but how do you think governments like the US should deal with these "enemy combatants" who have a sort of third status?

Winterbottom: What are "enemy combatants"? I think the use of language is really one of the terrible things that has happened over the last few years. I think theres a very conscious strategy of changing the names of things in the hope that it will allow them to do things they couldnt normally do. Instead of calling it a war in Afghanistan, its a "war on terror". What does that mean? If it had been a war in Afghanistan, they would have been prisoners of war, and when that ended they would have had to have been returned home. What it means is that individual people are being held for four years without any justice.

SPIEGEL ONLINE: "Road to Guantanamo" will be broadcast on British television this spring and also simultaneously released in theaters, on DVD and on the Internet. Why are you breaking with tradition to show your film in so many mediums at the same time?

Winterbottom: For this sort of film about something that is happening now, we want people to see it now, so obviously the biggest audience is TV. We dont really want to have to wait a year before its released on TV because its been in the cinema where the audience is smaller. And the idea is that maybe DVD and Internet, these things can all support each other rather than compete with each other for an audience. We just want as many people to see this story as soon as possible.