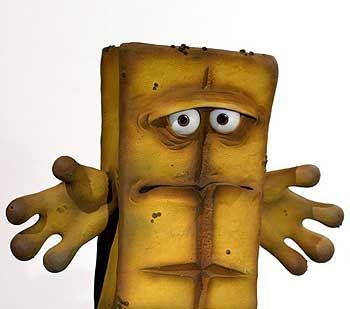 Who said Germans aren't funny? Sometimes they even have a laugh at their own expense.

The old, old story about the Germans is that they have no sense of humor, that they are obsessed with order and rules and have, over the centuries, refined their sense of politeness and formality to the point where to smile too much while wandering the German streets is considered a sign of imbecility.

Well, like all good generalizations about nations, this one is both true and untrue. Oh, the Germans have a sense of humor all right -- its just not like anything understandable from an Anglo-Saxon perspective. Case in point: Bernd das Brot (Bernd the Breadloaf).

Bernd das Brot is a star on the German childrens TV network KIKA. He can best be described as a German Muppet in the form of a loaf of bread, and he hosts the show with his two comrades, Chili das Schaf (Chili the Sheep) and Briegel der Busch (Briegel the Bush). It's a variety show with skits and music and lots of additional (human) actors, musicians and dancers. Bernd and his friends were, I believe, intended to appeal to children; but soon their popularity grew with teens and young adults and became a cult classic that still airs on KIKA -- at a time of night when most of the Kinder should be sound asleep.

I first "met" Bernd in the summer of 2005. Each year, I bring a group of American college students to Germany for a study abroad program based in Düsseldorf. I was resting in my apartment one evening, channel surfing, and I stumbled onto Bernds show. I was instantly hypnotized. What on earth was this madness, and how could it be happening in Germany? But as it slowly dawned on me that Bernd was the German Everyman (or Everybread?).

Unlike his friends Chili and Briegel -- who are unremittingly upbeat and happy and excited about life and their adventures -- Bernd is a manic depressive. Here is a bread whose main tag line, used repeatedly in the skits is Mein Leben ist die Hölle" ("My life is hell"). He admonishes his audience that hes had enough, hes going home, and you, the viewer, should as well! Geh nach Hause! says Bernd in his resonant, gloomy baritone. He hates us all and isnt ashamed to admit it. He is the dark night of the German soul anthropomorphized as a bakery item, itself iconic in a land that refers to even its beer as flüssiges Brot," liquid bread. Bernd views the world and the people in it as "Mist," crap.

Oh, I was starting to get it -- Bernd epitomized the fundamental pessimism felt by many, if not most, Germans about, well, almost everything. It's a pessimism my German friends acknowledge and to some extent revel in (I wont say enjoy, though Im not too sure about this). As an American, my relentless optimism about everything disturbs and distresses my circle of German friends, although they are usually too polite to say so.

That Germans would take to a character like Bernd and be willing to engage in this form of self-analysis and self-mockery should, in my view, be commended. That the people of the land of Goethe and Schiller would choose as their guide in this spiritual exploration a clinically depressed loaf of bread, is, perhaps, just another improbable element of the German Zeitgeist.