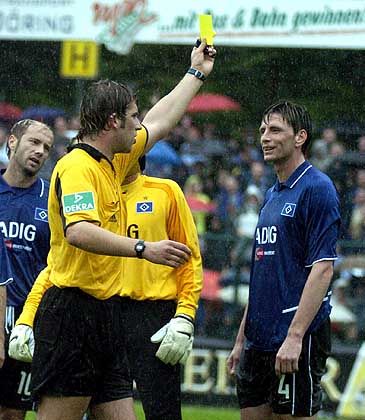 Robert Hoyzer gives a yellow warning card to Hamburg's Bastian Reinhard during the first round of the German Cup match between SC Paderborn and Hamburg SV in August. Hoyzer admitted he manipulated the game to help Paderborn win.

A 25-year-old blond heartthrob with an uncommonly good eye, a tad too much greed and an underdeveloped sense of morality has stolen Germany's greatest source of pride. German soccer, it seems, is tainted. Robert "call me Robby" Hoyzer, a rising star referee in German professional soccer, has admitted the unthinkable: He manipulated soccer games for money. Germany's beloved national sport -- indeed, its only major professional sport and the one channel Germans use to fete their country -- has been rigged. Germans, already gripped 2006 World Cup fever in anticipation of Germany's role as host to the event, have fallen into a state of stunned mourning.

"Hoyzer has to be locked up," writes one fan to the nation's top soccer magazine, Kicker. "Soccer will never be the same for me," says another." "The news makes me want to puke," pens a third.

The story of how Hoyzer manipulated at least six games in order to secure payoffs from high-stakes gamblers has been unfolding daily in the German press for more than a week. Already, it includes enough intrigue to fill a decent thriller. It even has made-for-television bad boys in the form of Croatian mafia bosses with blonde bombshells on their arms who earned big profits betting on games Hoyzer manipulated. The scene of the crimes is a seedy Berlin club atmospherically named "Café King." Even the good guys -- four honest referees who helped nab Hoyzer as the moral weakling he apparently is -- appear appropriately costumed, wearing bright yellow referee shirts which they never seem to take off.

The mess has saddled the German soccer league with its biggest scandal since 50 players were bribed to throw games in 1971 and officials have swooped in to eviscerate Hoyzer. They are eager to insist that German soccer is -- for the most part -- what it claims to be: Twenty-two athletes competing honestly on a playing field.

Meanwhile, Hoyzer, is begging for leniency and pulling as many people down with him as he can. He's already pointed his finger at three of the nation's 44 other referees -- including Juergen Jansen, a 44-year-old "sunny boy" who is the darling of the first division league and well-loved by fans. Jansen vehemently denies the charges -- and the nation is hoping he is innocent. If he was in on the con then the whole first division could be rotten. Hoyzer also says nine other second and third division players were in on the lucrative scam.

How far does the scandal reach? 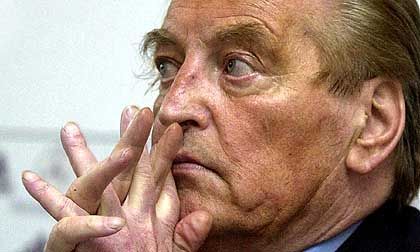 Gerhard Mayer-Vorfelder, President of the German Soccer Association (DFB) says he fears the scandal will grow.

Is Hoyzer just a cry baby trying to implicate others to save his own skin? No one knows, but the whole league is quivering. One of the games Hoyzer admits to manipulating was a German Cup game -- the annual tournament pitting all German teams against each other. The game cannot be replayed because the tournament has advanced. Now, all 27 of the games Hoyzer reffed this season are under scrutiny.

"With more names coming out, I no longer am willing to risk saying the scandal has reached its end," Gerhard Mayer-Vorfelder, the head of the German Soccer Association said on the popular Sunday talk show Sabine Christiansen. So far, no one has suggested a way to replay games considered controversial.

The pathetic part is that the whole affair -- which has gone so far as to push German Interior Minister Otto Schily to insist on revamping the rules surrounding sports betting -- netted Hoyzer a mere 60,000. For a 25-year-old partyer who earns about 30,000 a year and whose actual training was as a carpenter, this may have seemed like the big leagues. It's not. The three Croatian gamblers who bribed Hoyzer and who are now sitting in jail netted close to 2 million from the deal. The men paid Hoyzer -- first in small, unreciprocated rewards to get him hooked and later in large cash payments -- to tip the games in favor of the teams they bet on, often against high odds.

The whole affair reeks a bit of the 1987 American baseball scandal involving batting (and betting) legend Pete Rose. Rose went by the nickname "Charlie Hustle" and had the reputation of playing every game as if it were his last. But he was also a compulsive gambler and was fired as manager of the Cincinnati Reds and denied a place in the Baseball Hall of Fame when he admitted he bet on games the team played. His is a classic tale of flawed brilliance. Hoyzer's on the other hand, is more tawdry -- that of a money-dazed upstart, clearly awed by his power and perhaps jealous of the big money-makers whose on-field fates his whistle decided. 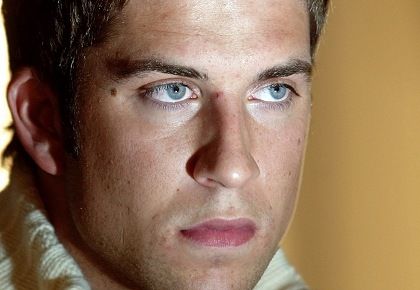 Hoyzer claims he is not the only one guilty in the scandal and has already started naming names.

Within his own mini-world of referees, Hoyzer, whose father was also a referee, was something of a star. At the young age of 25, he had already climbed high up the officiating ladder and after one and a half years reffing second division games, he was well on his way to the big (Bundesliga) leagues. Handsome and cocky, he even had his own soccer trading card. Now he'll be lucky if he is let into any stadiums -- even as a paying guest.

For German fans, the scandal is much farther reaching than a few corrupt officials. Since Germany's 1954 World Cup victory in Bern, Switzerland (depicted in the popular film the "Wonder of Bern") soccer has become a major source of German pride and a non-threatening means for the post-World War II nation to rekindle its self-confidence. In Germany, watching soccer is not only social, it is a cultural, almost sacred, activity. The streets literally go silent during big games.

"I shouldn't let myself be thrown off kilter, but this business really angers me," said Volker Roth, head of the referees committee of both the Union of European Football Associations (UEFA) and the German Football Association (DFB). "It's unforgivable." Rudi Assauer, a manager for the team currently in second place in the first division, Schalke 04, called it a "slap in the face for German soccer."

The timing couldn't be worse. In just 500 days, Germany will host the 2006 World Cup, an event it has been gearing up to for years. Chancellor Gerhard Schroeder, who, not unlike most German boys, considered becoming a professional player in his youth, is so hyped about the World Cup that he has made television ads in which he kicks a soccer ball. Of course, he has reason to push the event. He's hoping the spirit of the games will give his generally pessimistic people enough lift to keep them from focusing on high unemployment and the financial squeeze of his needed social reform program. 2006 is also an election year in Germany and according to an old adage, if the German team wins, the government stays in power.

Anatomy of a scandal 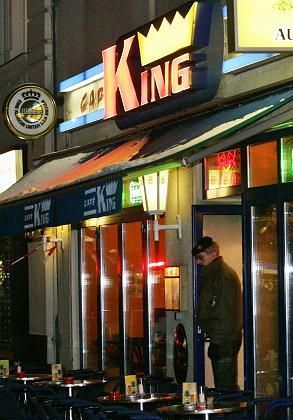 The scene of the crime: Berlin's Cafe King.

In the end, it was Hoyzer's clumsy, manipulative zeal that attracted suspicion. To get the "proper result" in a game last August he made a couple of extremely borderline calls. The game pitted the favored Hamburg against Paderborn SV, a team from North-Rhine Westphalia. Hamburg took an early lead, but then Hoyzer sent off one of the team's strikers citing "insulting behavior" and then awarded Paderborn two penalties under stunningly slim pretexts. Paderborn made both kicks and won 4-2.

In addition to the referees, the state-run German betting company Oddset noted the irregularity. Not only did they see erratic betting patterns on games Hoyzer officiated, but one Berliner seemed to always cash in big by betting on underdogs.

Late last week, the whole charade closed in on Hoyzer and after at first denying his role, he caved in and agreed to tell all. The scandal has made it clear that German soccer is about much more than the game. It -- like all professional sports today -- is also about the machinations behind the sport. In 2004, betting on soccer was a 1.2 billion industry.

This week, the German Soccer Association (DFA) has announced stricter rules, including assigning referees to games with just two days' notice in order to prevent match-fixing. That is what is currently done in the European-wide Champion's League and UEFA Cup tournaments. They will also hire a referee's referee -- an observer who monitors all calls -- for all German Cup games. Currently such observers are only present in second round games. Plus, new referees will face a three-year observation period in the lower leagues before they are allowed to move up.

And what about some sort of psycological training to better prepare the next round of young hotshot referees for the moral responsibility they carry? Bernd Heynemann, a former referee for FIFA, the world soccer body, and who is now a German parliamentarian, has gone so far as to suggest that psycologists work up profiles of referees to determine if they can handle the job.

Hoyzer clearly wouldn't have made the grade. Even now, in disgrace, he is far from a role model. Rather than departing with class, he continues to whine about his fate and to say that his one great wish is to be allowed to "blow the whistle again."