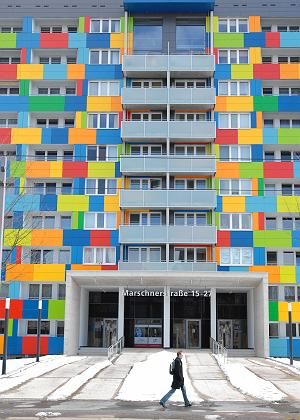 The American investor Fortress bought thousands of apartments in Dresden earlier this year. There will likely be more such sales in Germany.

It was supposed to be Freiburg's "get-out-of-jail-free" card. One €510 million real-estate deal and the city in south-western Germany was to liberate itself from debt. All Freiburg needed to do was sell the lion's share of its 8,900 city-owned apartments.

As it happens, the city's voters on Sunday rejected the idea, with 70 percent of those casting their ballots voting no. Many were concerned about what would happen were low-income housing to end up in private hands.

Still, Freiburg's attempt to rid itself of debt is hardly unique in Germany. With states and municipalities heavily indebted across the country, selling off properties and assets is en vogue. In just the past few weeks Leipzig and Oranienburg (near Berlin) have sold off parts of their municipal utilities and Düsseldorf got rid of a chunk of its energy supplier. But with a number of cities looking to make major dents in their mountains of debt, it is public housing which heads up the fire-sale list.

The cash-strapped eastern German city of Dresden was the first to make headlines in March of this year with the $1.75 billion sale of 47,000 apartments to the New York based private equity firm Fortress. At a stroke, Dresden was able to free itself of debt.

Now an even bigger deal is on the horizon. Germany's most populous state, North Rhine-Westphalia, recently announced that it intends to sell off its entire housing stock -- almost 100,000 apartments containing over 300,000 tenants. The state is hoping to use the proceeds to pay off some €2.5 billion in debts incurred by the state-owned housing company Landesentwicklungsgesellschaft (LEG). The state's finance minister Helmut Linssen told reporters that firms such as Gagfah, which is mainly owned by Fortress, and the London-based Terra Firma have already expressed interest.

The trend toward selling off public housing in Germany is not an easy one for the German public to stomach. It was only last year that senior German politician Franz Müntefering referred to foreign private equity firms as "irresponsible swarms of locusts" who, in their hunt for high profits, care little about people. And Germans in general tend to harbor deep suspicions when it comes to Anglo-American style capitalism.

But with German municipalities carrying some €82.8 billion in debt in 2005 according to a Sept. 15 Deutsche Bank report, and German states carrying fully €468.2 billion, the search is on for quick money makers. Enter the locusts. Since 2003, foreign private equity firms such as Fortress, Cerberus, Blackstone and Terra Firma have bought up tens of thousands of publicly-owned apartments in Germany. The Gagfah group alone now owns some 150,000 apartments in over 400 locations in Germany -- and has said it intends to invest up to €1.4 billion per year in Germany to double its residential portfolio.

The massive amount of publicly-owned housing in Germany is largely a product of the post-war years when a severe shortage of living space prompted municipalities to stock up. Now, many are concerned that selling properties off to foreign firms could result in price gouging or worse.

"There are grave concerns that the tenants will be the ones who suffer," says Dieter Hilser, spokesman on housing policy for the North Rhine-Westphalia Social Democrats. "In our view, social standards and tenants' rights cannot be protected." He says that, even when an investor commits itself to a social charter, ensuring compliance is very difficult. "Similar cases in the past show that such sales lead to rental increases," he says. "Apartments are often sold on to third parties  without an agreement on social standards."

Others also question the need for North-Rhine Westphalia to get rid of its public housing company LEG at all. The People's Initiative for Safe Homes and Jobs, a coalition of tenants' associations and trade unions currently collecting signatures to foil the sale, argue that the current LEG debt is just part of doing business and has nothing to do with mismanagement.

Plus, says People's Initiative's spokesman Helmut Lierhaus, "the flats need to remain publicly owned so that all social classes have access to housing."

The debate, though, is one that often ditches sobriety for emotion. Germany has for years been undergoing a painful transition away from cradle-to-the-grave social welfare and many feel the pinch has long become too tight. The state's apparent abdication of its duty to provide low-income housing has now proven low-hanging fruit for leftists. "Those who want to sell public housing supplies are against the interests of the majority of citizens," the head of Freiburg's renter association Franz-Georg Rips said after the sale there was blocked.

The concern, though, may be exaggerated. For one, as Thomas Beyerle, head of the property division of Allianz insurance points out, foreign owners hardly have a free hand. "Frankly speaking, my first thought when the first wave of foreign investors came in 2003 was, have they never heard of German tenancy laws?" he says. "You can't just raise the rent on an apartment by 20 or 30 percent."

Plus, in Dresden, little has changed since the sale, says Peter Bartels of the Dresden Tenants Association. "I believe that, within the next 10 years, tenants do not need to have any worries," he says. 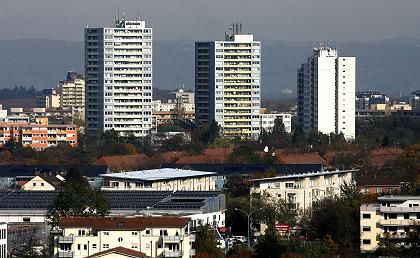 The south-western German city of Freiburg wanted to sell off public housing projects like these. The voters said no.

However, many German cities and states remain interested in the concept. A new study by the consultancy firm PriceWaterhouseCoopers (PWC) indicates that some 40 percent of German municipalities say they want to reduce their housing stock in the next few years. The vast majority of towns have sold off less than 10 percent of their housing stock so far. Still, the study also showed that it's primarily small and medium sized authorities which want to sell, suggesting that huge sales like the one in Dresden will remain the exception.

Even Berlin, which was recently denied federal help to pay off its massive debts of well over €60 billion, has decided not to sell off its 270,000 apartments. Meaning the locusts are going to have to look elsewhere. For now.

And at the end of the day, whether housing is publicly or privately owned may not make much difference. According to Helmut Trappmann, head of the real estate division of PriceWaterhouseCoopers Germany, "43 percent of the authorities we surveyed told us there is no difference between rents in the public housing sector and on the free market. So what is the real aim of the public sector?" he asks. "Would they like to offer cheap apartments? According to our study, they don't. The municipalities have to explain what their strategy is."