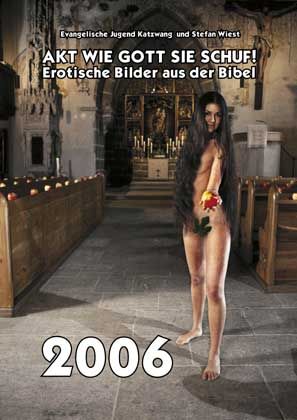 If you're a church youth group needing cash, this is a great way to make money.

The Russians in Stefan Wiest's living room need more light, so he switches on the overhead fluorescents. It doesn't look particularly nice but it'll have to do. Stefan sits down for the interview. Russian TV -- who would've thought it?

Actually Stefan has other things to do. He should be upstairs, where his parents are folding large strips of cardboard into mailing boxes. The task is mind-numbingly dull: Pick up the cardboard, fold it into a box, pack in the calendar and add it to the stack for the post office. They've got thousands of packages to fill but the pile of cardboard isn't getting any smaller. Sometimes the phone rings with customers asking why it's taking so long to get their orders.

There's a note taped to the living room door. "Some one from German public radio (or something like that) called. Will call again tomorrow."

Stefan Wiest, 32, is a printing technician from Nuremberg. He's a Protestant, married and has one child. He's also an artistically ambitious amateur photographer, and although he may not be a genius, his photos have been exhibited before -- in the local health insurance office, for example.

Next to him sits Marina Sidhu, 21. Marina's jet black hair reaches down to her hips. Wiest introduces her to the Russians as "our Eve." She's the one he photographed nude in the church --  which is how all the trouble began.

Nude photos it was.

The concept was nothing new. Last year the Franconian country youth group  had put together something similar -- sitting on tractors in revealing dirndls. Students posed nude for photos and there were already calendars  of nude volleyball players, soccer players and firemen. And then there was the film "Calendar Girls," so why not Marina, Julia and Michael from Katzwang?

They wanted to do everything properly: parents were informed, the pastor was asked to suggest suitable excerpts from the bible. Everyone under 18 needed written permission from their parents. A few members of the church board felt that showing naked women in the church was offensive, but they were clearly in the minority.

And so they took a few photographs: King David, who secretly watched a woman bathing, is depicted as a peeping tom in the sauna. The whore Rahab, waits in the door of a motel room, wearing only lingerie, Salome wears a thong and instead of her biblical seven veils, her body is covered in paint.

"It turned out really beautiful" says the Russian reporter in Wiest's sitting room.

An exhibition was planned for the second Sunday of Advent. Wiest told the local press and created a Web site. The young people thought about maybe advertising as well, otherwise nobody might come. The pastor talked to the evangelical press service and the church newspaper Sonntagsblatt. The next day he got a call from a Munich paper tz. "Why are you interested in our calendar?" he asked. He could hardly believe it. Why, Munich is 150 km away.

The hot blonde from October

Soon thereafter, the Internet server crashed. A Reuters report on the bible calendar had been distributed across the globe, along with the Web site address. Within three days the site received 6 million hits, the entire first print run of the 2,000 calendars were sold, at €12.50 a pop. The next 3,000 copies were also snapped up and Wiest was forced to remove the order form from the site - they just couldnt cope with any more customers.

Wiest gave interviews to the BBC, Colombian radio and dozens of German stations, while orders were coming in from Korea, India and the USA. Suddenly, there were arguments amongst the parish council, hostile reactions from Christian fundamentalists and criticism from the Catholic bishop. Last Thursday the parish community released a statement: It was never their intention to offend the religious feelings of others, the statement said. 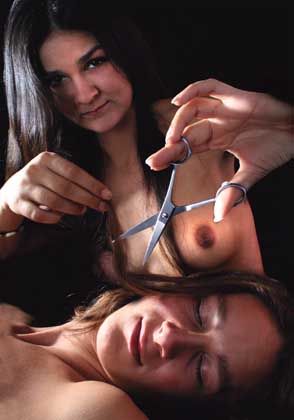 Then the TV film crews got in on the act. First Bayern 3 and ZDF, then ProSieben, Sat 1, and RTL, and it was always the same drill: shots of the models, usually female, flicking through the calendar, the pastor, the Web site. One film crew tried to persuade the model who depicted Eve to re-create the picture in the church. Naked, of course.

In the meantime these young people have got organized: King David is now the press officer, while Lot's wife, the pillar of salt from April, takes care of banking. The calendar has already made €40,000.

In Nuremberg-Katzwang the models have achieved a sort of notoriety, and they even seem to have achieved the original aim of the whole project: to get people interested in the Bible.

In the local high school the 9th graders persuaded their religion teacher to discuss the Biblical scenes in the calendar. Perhaps a strange request from 14-year-olds. But the boys in the class had discovered that Julia in the 12th grade was the hot blonde from October.