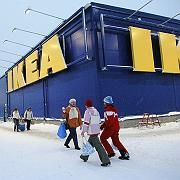 An IKEA store in Sweden: People trust the furniture maker more than the church.

Perhaps the news shouldn't come as much of a surprise, coming as it does from a country best known for its meatballs and the bright blue and yellow warehouses selling cheap and cheerful furniture around the globe. Still, preacher men the world over must be reeling. A new poll taken of Swedes indicates that more people trust IKEA than the church in the largely Protestant country.

According to the poll, taken by the business weekly Dagens Industri, 80 percent of Swedes said they had "much or very much trust" in the world's largest furniture store chain, which was founded by Ingvar Kamprad. But only 46 percent of the 800 people surveyed said they trusted the Swedish church, which counts 80 percent of the 9 million residents living in Sweden as members.

IKEA isn't the only company Swedes trust more than the church -- the list also includes Volvo (69 percent), Ericsson (59), Saab (57) and pharmaceutical giant Astra Zeneca (47) as well as four other companies that beat out the church on the trust factor. Indeed, the church landed in slot 14, behind Sweden's public television station, its universities, small business, the central bank and the daily paper Dagens Nyheter.

There was, however, some positive news for the church: It got better marks than the conservative party of Prime Minister Fredrik Reinfeldt (30 percent). And it fared better than foreign companies like Coca-Cola, which only 22 percent of Swedes said they trusted.