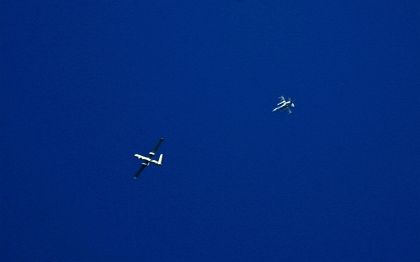 An Israeli F-16 and an unmanned drone flying above Lebanon in August. Israel wants to develop tiny flying robots to hunt down terrorists.

More than anything else, the war against Hezbollah in Lebanon last summer convinced Israel of the need to research new ways to fight terrorists. One idea has now received funding: that of building small flying robots that can navigate streets and alleyways.

The "bionic hornet," writes Israel's daily Yedioth Ahronoth, could chase, photograph and kill, say, a terrorist hiding with a rocket launcher in a civilian neighborhood -- as an alternative to bombing the neighborhood.

The Israeli government plans to invest $230 million in nanotechnology research and development over the next five years, which would make nanoscience one of Israel's most heavily invested R&D fields.

"The war in Lebanon proved that we need smaller weaponry," said Deputy Prime Minister Shimon Peres. "It's illogical to send a plane worth $100 million against a suicidal terrorist. So we are building futuristic weapons."

Other ideas include miniature sensors to detect suicide bombers and "bionic man" gloves that would give the user super-human strength. Prototypes for the new weapons could be ready within three years, Peres said.

A "bionic hornet" would be an advance on pilotless drone aircraft, which the United States has used already against Al-Qaida in Afghanistan and Iraq. Last year, for example, the CIA killed a senior al-Qaida operative by firing a missile fired from a radio-controlled drone near the Afghan border.

But the problem with such weapons is that insurgents and terrorists can use them, too.

The Colombian military found nine small remote-controlled planes at a base it had taken from the Revolutionary Armed Forces of Colombia in 2002, for example, and in April 2005 Hezbollah flew a drone over Israeli territory.

"We are observing an increasing threat from such things as remote-controlled aircraft used as small flying bombs against soft targets," said Michel Gauthier, the head of the Canadian secret services, at a security conference in Calgary last spring.