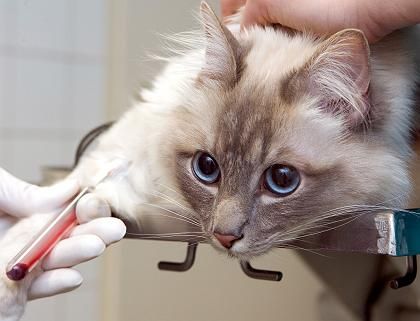 A German cat is tested for bird flu following the discovery of a cat that died of the H5N1 virus on the island of Rügen.

On Wednesday, authorities in Germany said the H5N1 avian flu virus had been detected in a cat killed by the disease over the weekend. Like the majority of the more than 100 dead birds officially infected with H5N1 in Germany since mid-February, the cat was found on the Baltic coast island of Rügen.

The infected cat was discovered in the restricted area of the island where most of the bird cadavers have been found since the disease's outbreak in Germany two weeks ago. Health officials believe the cat may have eaten an infected bird. It was a stray that had only recently been adopted and was not, according to the state agriculture minister Till Backhaus, a "cuddly cat." His owner hasn't shown any signs of infection, though he remains in close contact with the health authorities. In the meantime, health authorities throughout the country have called for pet owners to keep their cats indoors and their dogs leashed at all times.

While the virus has proven deadly for a number of felines big and small in Asia, this is the first documented case in a cat in Europe. Germans are particularly concerned because the housecat, with an estimated population of 7.5 million, is Germany's favorite pet. In Thailand, tigers and leopards have fallen victim to the virus in the three waves of avian flu since 2003. Most contracted the disease from eating infected raw chicken. In the worst outbreak, in October 2004, however, authorities determined that at least some of the 147 tigers killed or euthanized as a result of the virus, were infected by tiger to tiger transmission.

Now that the virus has killed a housecat, worries are increasing that it could become easier for humans to get infected. According to the World Health Organization (WHO), most of the people who were infected with the virus had direct contact with infected live or dead poultry. Of the 173 cases of avian flu in humans, 93 were fatal. Vietnam has seen the most cases thus far -- 93 in total with 42 fatal infections. Closer to Europe, in Turkey, 12 cases have been detected in humans, with four fatalities. Currently, the disease can't be transmitted from human to human, but scientists fear that if it does, it could cause a pandemic of a magnitude not seen since the Spanish flu H1N1, which killed as many as 50 million people between 1918 and 1920.

"Every day there's another country"

The H5N1 virus is spreading rapidly at the moment. In the last month alone, it has been detected in some 20 new countries. Dr. Anthony Fauci, head of the U.S. National Institute of Allergy and Infectious Diseases, told a conference on bird flu in Washington, D.C., "Every day there's another country ... and it's going to go all the way across (the globe) -- there's no doubt about it." Sweden is the most recent to be added to the list, and authorities expect more cases to turn up throughout Africa. Africa poses a particularly difficult case for experts. The combination of some 1.1 billion chickens kept mostly in backyard farms combined with the easy movement of birds across borders and limited awareness about the disease, could make it difficult to detect bird flu fast enough to prevent the worst impact.

Meanwhile, European poultry producers are getting nervous. Poultry consumption in Italy fell by as much as 70 percent according to some reports. In Germany, a spokesman for Germany's €2 billion annual poultry industry told the Berliner Zeitung, "The demand for poultry products already fell last autumn by about 10-15 percent and has remained at that lower level," unaffected by the outbreak on Rügen. "We expect that it will remain that way," he added. If the disease makes its way into indoor stalls, it could pose a grave threat to the country's 120 million chickens, turkeys and ducks, as well as to an egg industry with an annual production volume of 13 billion.

In France, Europe's largest producer of poultry, the outbreak of H5N1 on a turkey farm in the south could have disastrous consequences for an industry worth an estimated €6 billion. Authorities reacted quickly after 400 turkeys died of the H5N1 virus by having the rest of the 11,000 birds slaughtered. Still, some 20 countries including Japan and the US instituted at least a partial ban on French poultry. And after the first strains of the disease were found in the Asian part of Turkey last October, French consumers shunned eggs, causing a 30 percent drop in sales since November and leading to industry losses of €130 million.

On Wednesday, authorities continued to urge people to remain calm. According to a statement released by WHO, "to date, no epidemiological data suggest that the disease can be transmitted to humans through properly cooked food (even if contaminated with the virus prior to cooking). However, in a few instances, cases have been linked to consumption of dishes made of raw contaminated poultry blood."