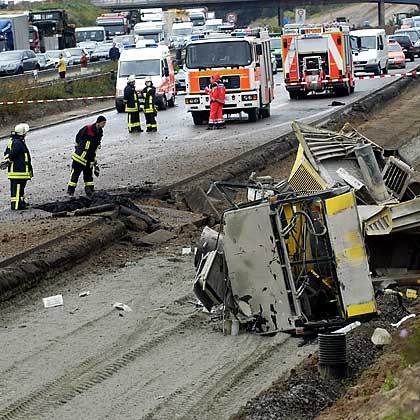 A cutting machine lies wrecked by the side of the A3 motorway next to a small crater left by the explosion.

A World War II bomb has exploded during construction work on a German highway, killing one worker and injuring several motorists who were driving past, police said.

The worker had been cutting through the road surface near the south-western town of Aschaffenburg when his machine struck the bomb and triggered it. Police said they weren't sure yet what type of bomb it was. "The explosion seems to have been too small for it to have been an aircraft bomb," a police spokesman said.

The A3 Autobahn linking the cities of Frankfurt and Würzburg has been blocked in both directions.

More than 60 years since the end of World War II, construction workers still frequently unearth unexploded bombs and it is not uncommon for whole city districts to be cordoned off and even evacuated while bomb disposal experts defuse them.

Indeed, just last week, some 22,000 people were evacuated from their homes in Hanover when three World War II bombs were discovered.

Allied pilots rained nearly 2 million tons of explosives on Germany during the war. Landmines, hand grenades, mortar bombs and anti-tank devices from the fighting on German soil at the end of the war are also found, and authorities say it will take decades before the country is cleared of duds.

Between 400 and 600 bombs are discovered a year in the state of North Rhine-Westphalia alone, where the heavily industrialized Ruhr region was a major target for Allied bombers.

Three workers were killed and 17 people injured in Berlin in 1994 when a wartime bomb exploded during construction work. In 2003 in the Austrian city of Salzburg, two people were killed while attempting to defuse a 250-kilogram bomb.