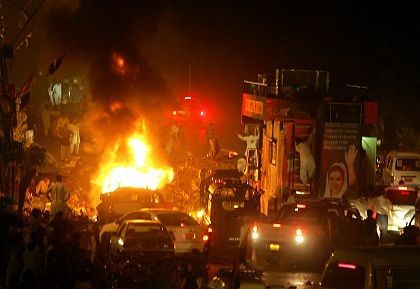 A fire erupts from a car in front of an armored vehicle carrying former Pakistani Prime Minister Benazir Bhutto following a bombing on the convoy in Karachi. Two bomb explosions killed at least 134 people and injured over 400 injured in two bomb explosions.

According to reports on local news stations late Friday morning, 134 people had been killed and about 400 wounded.

Ms. Bhutto, who had spent eight hours on the open roof of the truck waving to supporters, had climbed inside the armored vehicle 10 minutes before the blasts occurred just before midnight, said Rehman Malik, her security adviser and close associate.

She was immediately taken to Bilawal House, her home in Karachi. The parade through the city had been scheduled to end several miles away at the tomb of Muhammad Ali Jinnah, the founder of Pakistan.

Ms. Bhutto's arrival at 2 p.m. had drawn huge crowds, perhaps 200,000 or more, who danced on top of buses and surged forward as she inched her way for hours through her home city.

The strong outpouring provided an emotional homecoming for Ms. Bhutto and political vindication of sorts for a woman twice turned out of office as prime minister, after being accused of corruption and mismanagement.

It also demonstrated that she remained a potent political force in Pakistan, even after her long absence, and marked what supporters and opponents alike agreed was a new political chapter for the nation.

The violence that quickly followed showed it to be a treacherous one as well.

The explosions, caught on camera, gave off brilliant white flashes and set two cars ablaze. Survivors stumbled over bodies and debris in a haze of smoke. It was not immediately clear if the explosions were caused by suicide bombers, and there were no claims of responsibility.

"I can only say that I saw heaps of bodies lying over there," said her adviser, Mr. Malik. He was standing at the front of the truck and was knocked down by the force of the blast, he said. His hair was burned.

"The damage could have been much worse had we not taken our own security arrangements," he added.

The government had promised before Ms. Bhutto's arrival to provide security. It had also asked her to delay returning. But Ms. Bhutto's Pakistan Peoples Party had fielded 2,000 of its own workers to form rings around their returning leader, guarding her with their numbers and preventing any vehicles or people from approaching.

Before the explosions sundered the celebration, thousands of supporters and workers from her party had lined Ms. Bhutto's route, waving banners and surging forward for a glimpse of the opposition leader. Many danced in the road.

Ms. Bhutto waved as music pumped out from loudspeakers. The crowd was overwhelmingly working class. Many young men said they were unemployed, but had traveled hundreds of miles, paying their own way, and camping out overnight on the road to the airport to await her arrival.

In the crowd, Raja Munir Ahmed, 42, a real estate agent, said he had come from Mirpur in the Pakistani-administered part of Kashmir. "It was a journey of 1,500 kilometers, and all along we saw buses and cars carrying Peoples Party flags," he said. "People want change. People want to get rid of inflation and unemployment."

Then he shouted, "Long live Bhutto!" and disappeared into the crowd.

Such supporters were among the majority of those killed and wounded. But about 20 were also police and law enforcement officials, Interior Minister Aftab Ahmed Khan Sherpao said. Eight police vans were flanking the truck at the time and the explosions occurred on the left and right sides of the road, he said.

He denied that it was a security lapse, saying that the crowds and length of the route made it difficult to ensure security.

Earlier, Ms. Bhutto was clearly emotional as she took her first steps on Pakistani soil, having lived the last eight years in self-imposed exile in London and Dubai. She left Pakistan to escape corruption charges she contends were politically motivated.

She climbed down a metal staircase to reach the tarmac, and paused on the bottom step and prayed as friends held a Koran aloft. As an aide embraced her, Ms. Bhutto wiped tears from her eyes.

"The most important step -- to be back on Pakistani soil," she said, as cameramen swarmed around her.

On the plane from Dubai, supporters broke into repeated cheers and chanting of "Prime Minister Benazir," standing in the aisles and delaying the flight for nearly an hour. Ms. Bhutto walked through the cabin to greet supporters and the news media.

"Very excited, very happy, very proud, a tremendous sense of responsibility as there are so many people at the airport," she said when asked how she felt.

In words that later seemed prescient, she spoke strongly about terrorism and the need to save Pakistan from extremism. "The time has come for democracy," she said. "If we want to save Pakistan, we have to have democracy."

She has been outspoken against militants and Al Qaeda and repeated the same comments as she flew in. "The terrorists are trying to take over my country and we have to stop them," she said.

Ms. Bhutto had made clear repeatedly that she was returning to Pakistan to lead her party in the parliamentary elections scheduled for January. If she can win a change in the law, she will run for prime minister for a third time, something now legally barred.

"The people are telling me the bread-and-butter issues are the most important," she said. "They are saying that poverty has increased, the gulf between the rich and poor has increased. They say that people want change. They want a government that listens to them, will respect them, and will address the people's issues."

Senior members of the party traveling with Ms. Bhutto said the turnout made it clear the people wanted change after eight years of military rule.

"It is unprecedented," said Aftar Rana, a senior party member from Punjab Province, looking down at the crowd. "I think we will sweep the elections. People have come from everywhere."

The opposition leader's return was made possible after months of back-channel negotiations with Pakistan's president, Gen. Pervez Musharraf, over a way for the two leaders to share power as Pakistan makes a transition from a military government.

Ms. Bhutto's party did not join other opposition parties this month in boycotting presidential elections by the national and provincial assemblies. The move allowed General Musharraf to successfully engineer his re-election, though he still faces legal challenges in the Supreme Court over his eligibility.

For his part, General Musharraf issued an amnesty for Ms. Bhutto and others accused of corruption in recent years, and he agreed to resign his post as chief of the army staff and serve his next term as a civilian.

But the bombing upon Ms. Bhutto's arrival made it clear that, deal or no deal, the country's politics remained exceedingly tense, and dangerous. The explosions now seem certain to add fresh venom to relations between the Pakistan Peoples Party and the government.

General Musharraf, according to a statement released by state media, condemned the attack "in the strongest possible words," calling it "a conspiracy against democracy."

The Bush administration, which has backed General Musharraf, noted his condemnation of the attack, as the State Department issued a statement saying, "Those responsible seek only to foster fear and limit freedom."

Nonetheless, Ms. Bhutto's husband, Asif Ali Zardari, who did not make the return to Pakistan with his wife, immediately pointed a finger at the government and said the Pakistan Peoples Party would have to rethink its understanding with the government.

He said the government felt threatened by the power of Ms. Bhutto and suggested that the intelligence agencies were behind the blasts.

"I blame the government," he said in an interview with Geo, an independent television news channel, from his home in Dubai. "The intelligence agencies are spreading terrorism," he said. "Those who are sitting in the government feel threatened by us."

Ms. Bhutto earlier said in the interview atop the truck that she was concerned about her security and that she had told General Musharraf that she suspected people in his administration and the security forces of supporting the militants and terrorism.

"This is not the same Pakistan it was in 1996 when my government was overthrown," she said. "The militants have risen in power. But I know who these people are, I know the forces behind them, and I have written to General Musharraf about this. And I've told him there are certain people I suspect in the administration and security.

"Unless there is some thought given to that, this is what emboldens the militants," she said. "They've got some covert support from sympathizers within the system."