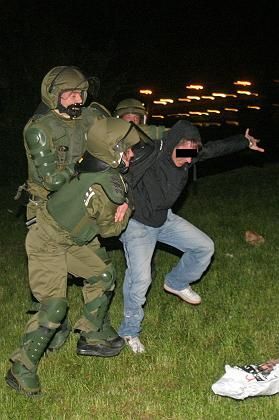 Father's Day can often get out of control in Germany. Here, a man is arrested on Father's Day in 2005.

On a certain Thursday towards the end of May, don't be surprised to walk outside your door and find grown men slumped against lampposts, or lolling dazed and confused in wooden carts, clutching barrels of beer. This is Father's Day, German style. While in many countries the Father's Day ritual involves little more than writing a card and giving the gift of a new pair of socks -- with breakfast in bed thrown in if the pater familias is especially lucky -- the Germans have turned it into a true holiday for the country's men. They are granted carte blanche to get riotously rip-roaring drunk.

The day always coincides with Ascension Thursday, a public holiday in Germany which falls 40 days after Easter. Because the supermarkets are closed, those who have failed to stock up sufficiently for the hard day's drinking ahead are often found early in the morning gathering in clusters outside services stations stockpiling their booze for the day. The wooden carts are then loaded up with the liquor -- practical for the double purpose they often serve later on as the first soldiers begin to fall.

Not all German men take part, of course. But the ones who do -- and they don't even have to be fathers to participate in the binge -- mostly tend towards middle age and are often clad in costumes or T-shirts with highly politically incorrect slogans that are easy to read as they stretch nicely across ample beer bellies. Kind of like a staggering billboard. Some carry walking sticks with small baskets full of schnapps attached to the top. Tradition dictates that these booze brothers sit in a circle in some leafy place, recite poems, warble songs and tell awful jokes and proceed to get as smashed as possible. When their own supplies run out, the pub crawl begins. This is when innocent members of the general public are most likely to come face to face with Männertag as it is called in German. And it's not always an edifying experience. A drunken gang of Teutonic tipplers can be a somewhat alarming experience, particularly for women.

The Father's Day tradition, which is also called Herrentag,originated in the 18th century, and since then has always fallen on Ascension Thursday -- the original idea being to celebrate Jesus returning to the holy Father. Traditionally men would be placed in a cart or carriage and brought to the town or village square, and the proud father who had sired the most children received a prize from the mayor, often a big piece of ham. By the 19th century, colorful parades became common, featuring horse-drawn carriages and traditional walks by men and women commemorating the walking of the apostles. By the late 19th century, as religion lost its hold on many, particularly in urban areas, the day evolved into men going on little walking trips, and bringing picnics of ham and beer in handkerchiefs tied to their walking sticks. By the 20th century it had reached its current incarnation: The Day of Drink.

Not all guys who enjoy Männertag get completely sloshed -- indeed for a country with a reputation for high alcohol consumption, Germans tend to be exceptionally good at controlling their drink intake. For most, the day is just a good excuse to get together with friends, with cycling or hiking trips not uncommon. Sometimes even women are allowed to take part. But even if they may be in the minority, the roaming gangs of intoxicated men mean that good natured, boisterous fun can quickly turn to nasty aggression, or even violence. In fact the police and emergency services are always on high alert on Männertag and there are far higher than normal incidences of street thumping, public brawling and other mindless violence and general bad behaviour. The bad name that the day now has for "boozing and beating" has led some left-wing and feminist groups calling for it to be banned. Another unpleasant aspect is that neo-Nazi groups have been known to take advantage of the occasion to go looking for trouble.

So one person's good old fashioned tradition is another's unpleasant drunk and disorderly. The best advice for Father's Day in Germany might be to approach with caution, or better yet, to stay indoors. Why not sit back on your balcony, sipping a beer safe from harm? From there, you can observe the beast in his natural habitat: merrily staggering down the street in search of the next drink or slumped unconscious in a wooden cart.