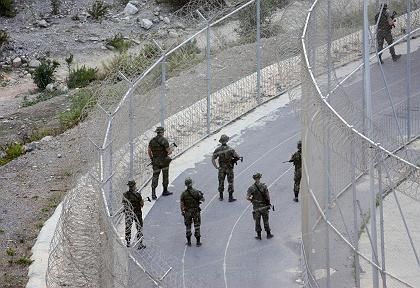 The United States is currently engaged in a national tug o' war over whether it should further secure its southern border to Mexico or whether it should make an unprecedented effort to embrace and legalize illegal immigrants who are an important part of the country's economic growth. It's a debate that has received a lot of press in Europe. The EU, after all, has much the same problem. Its southern and eastern borders also mark the border between the rich Western world and poor developing countries. They have become magnets for illegal immigration.

The European flashpoint is the border Spain shares with Morocco -- the final stop for thousands of sub-Saharan Africans fleeing desperation for a life of economic prosperity in the European Union. Thousands successfully cross the Mediterranean Sea each year and later take under the table jobs working in Spain or other parts of Europe -- many in agriculture. But many more wind up in immigrant holding pens created by the Spanish government in the enclaves of Cueta and Melilla on the shores of northern Africa, where the vast majority are eventually forced to return to their home countries.

Still, for many, the camps are the only hope they have of reaching the European mainland. The issue dominated the headlines last year after 1,000 migrants tried to climb over the 3 to 6-meter high razor wire fence to get inside the camps. Police responded with a hail of rubber bullets that left five immigrants dead. The incident shocked Europeans, who thought border shootings had ended with the Cold War and the fall of the Berlin Wall. During the past 10 years, about 8,000 illegal immigrants have died grasping for the European dream.

Indeed, the situation in Europe is a virtual carbon copy of America's southern border with Mexico. American reporter Eric Schlosser even goes so far as to call Spain the "California of Europe." Like much of southern California, the Almeria region of southern Spain specializes in vast produce farms heavy on irrigation and heavily reliant on low-wage labor. Similar agricultural practices have also spread to southern France and Italy.

In the mid-1990s, the countries arrayed along Europe's southern underbelly had hoped that economic development aid and cooperation with countries in North Africa would help stem the flood. It didn't. Instead, border-control policies have been introduced that are remarkably similar to those used by the US Border Patrol on the United States border with Mexico.

Indeed, the surge of migrants at Ceuta and Melilla last year came after the completion of hi-tech surveillance on the Spanish and Moroccan coasts that closed easy access to Spanish shores. During the stampedes, EU Commissioner for Security and Justice Franco Frattini vowed to further tighten coastal surveillance.

Construction is now under way to fortify the fences at the Spanish enclaves with hi-tech sensors and water cannons. More than €40 million in EU funding has gone to Morocco to finance efforts to keep immigrants from reaching Spain. But the situation has deteriorated -- not only for Morocco, but also for the immigrants. Hospitals that don't even have enough resources to provide proper care for locals are forced to treat migrants. And the international organization Doctors without Borders alleges that immigrants filtering through Morocco have been subjected to police brutality. In one widely publicized incident, Moroccan police sent busloads of migrants from Ceuta to the city of Oujda on the northern border of the Sahara before ordering the passengers to "walk home."

In short, Ceuta and Melilla have become a burning issue on Europe's southern border. And the problem has so far proven immune to political solution.

"By providing so few legal options in comparison to the US, Europe has contributed to its own problems of illegal immigration," said Joaquin Arango of the University of Madrid. Indeed, most of the ideas floated here tend to reinforce the idea of a "Fortress Europe," with its borders sealed to the outside world. One idea in Europe that gained traction after the events at Ceuta and Melilla was a proposal by British Prime Minister Tony Blair to create "protective zones" where migrants and asylum seekers would be held in EU-financed camps in North Africa. But the idea never developed. And Europe still hasn't made any progress in addressing how best to deal with the endless stream of illegal immigrants seeking to start a new life on the continent.

Though countries across the European Union and the US hold vastly different views about immigration, the borders separating California, Arizona, New Mexico and Texas from Mexico, and those between Ceuta and Melilla are testament to problems shared by Europe and America. Are there lessons that can be taken from US and European border experiences and used to create common solutions to mass migration from developing countries? Please share your opinions in the SPIEGEL Atlantic Forum.

With reporting by Anjana Shrivastava