"Anna Nicole, she's everywhere," the director Gregory Nava says with disgust, referring to the model Anna Nicole Smith who recently died in mysterious circumstances. "And I don't see the women in Juarez anywhere." 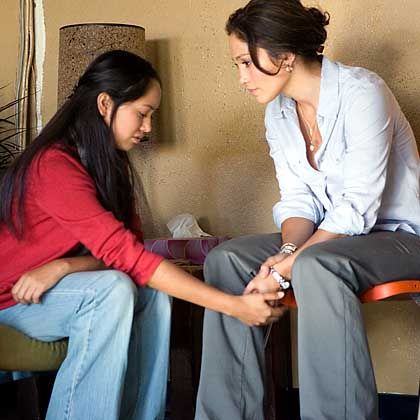 Nava hopes to rectify that with his new film "Bordertown", which tells the story of the Cuidad Juarez murders: an epidemic of hundreds of poor, pretty women systematically raped, mutilated, and strangled to death in the Mexican border town since 1993. When Nava heard about the murders, he turned to one of his favorite leading ladies: Jennifer Lopez. "I found this situation shocking and horrifying and I wanted to do something," Nava says. His vision was to tell the devastating stories through "an exciting thriller-drama."

It didn't take much to get Lopez on board. The two have a long history of working together. In 1995, Nava, who has made a career documenting the intersection of cultures on both sides of the US-Mexico border, first cast an unknown Lopez in "Mi Familia." Two years later he made her a star in "Selena."

"Greg came to me and explained what was going on down in Juarez," Lopez told the magazine Variety. "Once I knew, I felt like I had to be involved. It became something I had to do -- to bring this issue to the surface."

That was in 1998. Nearly a decade later, the fruit of their collaboration, "Bordertown," is premiering Thursday at the Berlin International Film Festival (Berlinale) as part of the official competition. The film boasts one of the festival's most star-studded casts, matching Antonio Banderas and Martin Sheen along with Lopez, who is also making her first outing as a producer.

The thriller casts Lopez as an eager (and sexy) Chicago journalist longing to go and report from Iraq. Instead her editor assigns her to investigate the murder of women just south of the Mexican border. As she sets out to unravel the mystery, she quickly finds her life at risk as she races through crowded streets, interviewing victims' families and authorities -- while still finding time to tousle with ex-lover Banderas.

Nava says his inspiration for "Bordertown" draws from the work of Guatemalan writer Miguel Angel Asturias, the magic realism of Gabriel Garcia Marquez, and the social dramas of Charles Dickens. It is also a return to the tradition of Nava's breakthrough movie, "El Norte," which was nominated in 1984 for an Academy Award for best original screenplay. In that film, most memorable for the scene of illegal immigrants crawling through a rat-infested sewer, he created a fictional story from scores of interviews. In "Bordertown" he took the same approach, trying to weave together the stories told by family members of the murdered young women into his "thriller-drama."

But while "Bordertown" will open in German theaters later this month, and other European theaters soon thereafter, it still does not have a US release date -- despite what Nava describes as widespread interest in the Latino community. It seems a long wait for a film whose mission, says Nava, is to take a "social injustice and compel people to do something about it." Especially so, since in Juarez the deaths continue and the murders remain solved.

When it comes to the actual details of the Juarez murders, Mexican authorities and human rights groups disagree on the source and the extent, but there is no question that in 1993 women began being raped, mutilated, and strangled in the desert surrounding the border town. Most of the victims have been around the age of 20, dark-skinned and worked in the maquiladoras, low-wage factories that boomed after the signing of the North American Free Trade Agreement.

In all, authorities estimate more than 400 women have been killed in Juarez, where about 1.5 million people live in desperate conditions across the Rio Grande from El Paso, Texas. The targeted murders essentially ended in 2003, but the murder rate of women in the city continues to be very high.

Theories to the source of the murders are abundant. Some have blamed the deaths on one serial killer; others drug traffickers, wealthy trophy killers, organ harvesters, or husbands and boyfriends. Reporters and human rights groups investigating the murders have accused a complex web of perpetrators, government indifference, and a larger culture where poor women are not valued.

No one has been satisfactorily tried for the ten-year murder epidemic. A number of men have been given life sentences without credible evidence against them, while none of those found by independent researchers to be most directly implicated -- including policemen, justice officials, elected government officials at the state level -- have ever been indicted.

"Bordertown" is just the latest in a series of artistic ventures -- including songs, documentaries, books and a TV series -- based on the murders. Last year another feature film, "Virgin of Juarez," starring Minnie Driver as a journalist digging into the murders, played an art-house run in the US.

Rupert Knox, a researcher on Mexico for Amnesty International, says while a film such as "Bordertown," can draws attention to abuse "that we hope will enable real change," in the way that "Blood Diamonds" has to the issue of child soldiers, it is also important to recall that it's "a fictional representation of facts."

Nonetheless, Amnesty International, which was consulted on the script, is not wasting the opportunity to use the star power in "Bordertown" to up Juarez's profile: Nobel Peace Prize winner Jose Ramos-Horta will present Lopez with the "Artists for Amnesty" award at the Berlinale on Wednesday.

Even if it's a hit at the Berlinale, however, don't expect to see "Bordertown" in a US theater any time soon. A deal with a distributor is reportedly nearly complete, but as Nava points out, "It's going to be hard to get it out before summer and it's not a summer movie." He adds: "You don't want to release 'Bordertown' against 'Spiderman.'"