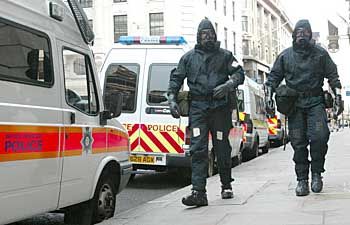 Tube commuters in the London financial district are panting for air. Panic breaks out. Klaxons and sirens wail as fire trucks and police swoop down on the city quarter, rushing towards the subterranean passageways where injured may lie in wait. Biohazard and poison gas equipment is out on the street, and soon zones are being decontaminated as victims emerge from tunnels and evacuation passages. Emergency service workers shuttle them to University College Hospital. Things are running like a well-oiled machine.

The scene is not from Thursday's bombings, but September 2003. And instead of terrorists, British authorities were conducting the drama. More than 500 police, fireman, and rescue workers took part in operation "Sassoon", the biggest anti-terror operation in British history.

"An attack on London is only a matter of time," British security expert Alex Standish said at the time. An attack on London could not be ruled out. And on this point even Defense Minister Alistar Darling agreed. Today, the gruesome prophecies have come true, and what was an exercise turned out to be a necessary dress rehearsal. London's Police Chief Sir Ian Blair has called on inhabitants of the British capital to stay at home and avoid calling emergency services unless in absolute need. "Emergency plans are beginning to come together," Tony Blair announced. Ambulances and hospitals were working in harmony, and the wounded were brought in as if on a conveyor belt.

Until now, the British capital's only terror experience had been IRA bombings. But a penetrating report issued to parliament in the summer of 2002 warned of terror's new face -- and of Britain's poor preparedness for it. America's closest ally needed to develop new, comprehensive reaction plans, appropriate for a variety of large-scale scenarios. 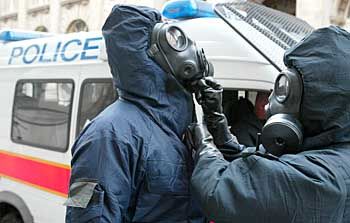 Police officers in chemical suits arrive in the area of Bank Underground station as part of the 2003 exercise.

The threat of new terror attacks had been real for years: in January 2003 an Islamist terrorist group was uncovered while planning a chemical attack on London. The poison Ricin, made from Castor bean extracts, had already been ordered for the event. In February of that same year, tanks sealed off Heathrow airport because of fears of a surface-to-air missile attack.

Then in March came the US and British ground invasion of Iraq. A month later, al-Qaida leader Osama bin Laden called on his followers to "rise and take up arms against America and Britain." And in October he announced that his movement retained the right to settle the score with Great Britain, Australia, Poland, Spain, Japan, and Italy -- all of whom participated either in the Iraq war or the subsequent occupation.

Since the attacks on Madrid a year and a half ago, the city has been highly active in preparing its residents for the inevitable. Among the initiatives has been a high-profile poster campaign in the London Underground. The ads ask: "Who owns this bag?" Paying careful attention in the train and underground is now a matter of life and death, said Peter Clarke of London's anti-terrorism squad. But in the end, even the closest attention couldn't have prevented Thursday's attack.