"To be honest, I would think twice about traveling by tube today," was the explanation the manager of the Starbucks on the Kings Road in Chelsea gave for the almost empty cafe. It's 9 a.m. the day after the terror attacks in London and the city is calm, collected but wary.

Buses, usually jammed to capacity, actually have seats empty, and the entrance to the tube at Sloane Square was unusually free of queues. Talking to commuters it was clear that if there was an option of not using the tube, or not traveling at all, they would take it. If not, well then, that's just the way it is, and with typical British pragmatism the city had decided that it would just get on with it. 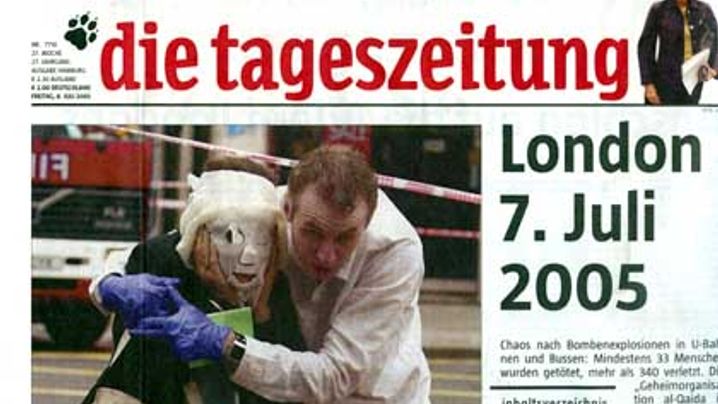 Terror in the Press: Newspapers Around the World React

Today's papers in England echo this view. "Our spirit will never be broken," declares the populist daily The Sun. The paper predictably enough rolls out the worn-out World War II references saying "Adolf Hitler's Blitz and his doodlebug rockets never once broke London's spirit. Years later, the capital was bloodied but unbowed by two decades of deadly attacks by the mad bombers of the IRA. So yesterday's outrage by the fanatics of al-Qaida -- Britain's 9/11 -- will achieve only one end.... To make this nation ever more determined that those who violate our way of life must never win."

The paper goes on to say, in typically inflammatory nature, that "Britain is crawling with suspected terrorists and those who give them succour. The government must act without delay, round up this enemy in our midst and lock them in internment camps. Our safety must not play second fiddle to their supposed 'rights.'" The extreme nature of the paper's commentary, although not being far from representative of the whole country, bodes ill for the future. As do the commentator's bellicose final words. "It the terrorists want a fight, by God we'll give it to them. In the words of Winston Churchill in 1941: Never give in. Never. Never. Never."

The quality daily The Independent, on the other hand, is more measured in its comments, and rather than calling for internment camps to be set up, it is adamant that Britain "must not allow this atrocity to undermine our open society." The newspaper has always been open about its belief that the Iraq invasion was wrong, saying that it has helped to radicalize the Islamic world against Britain. But believes nevertheless that "the policy towards that country now cannot be determined by fear of the bomb."

While the commentator accepts that there will inevitably be "a certain amount of political hyperbole" after such an attack, it says that it "Britain must be careful not to radicalize groups here or drive its own citizens to sympathize with extremists by seeming to blame whole sections of society." The right response, the writer believes, is not only "first-class intelligence and dogged police work" but also to hang on to its values of tolerance and openness. "London won its Olympics bid on a pitch that emphasized its multiculturalism, its tolerance and its openness to the outside world. We must not lose this as we react to this outrage, however abominable it is."

The conservative broadsheet The Telegraph is also adamant that anti-Islamic feelings are not the answer to the bombings. "Remember that normality is the only civilized response to terror" is the commentary's title. "Bin Laden's men fight with hate in their hearts," writes the paper, saying that the terrorists' aim is to actually increase anti-Islamic feeling in Britain. "The bombers' greatest wish is to turn this sorrow into anger -- anger that is directed at Muslims. The calculation is that this will drive Muslims towards the bombers' own pitiless world view. The process, the theory runs, will culminate in an Islamist revolution that will sweep away the old regimes of the Muslim world and replace them with ideologically pure rulers." But, the commentator does not believe that this will happen in London. People will bury the dead, care for the injured and return to normality in a dignified manner. "That is why," the writer depressingly concludes, "they will strike again."

The left-leaning Guardian newspaper features a piece by the celebrated writer Ian McEwan. "The mood of a city has never swung so sharply," he writes. "On Wednesday there was no better place on earth. After the victory in Singapore, Londoners were celebrating the prospect of an explosion of new energy and creativity ... the echoes of rock 'n' roll in Hyde Park and the its wave of fundamentally decent emotions were just fading. In Gleneagles, the summit was about to address at least -- and at last -- the core of the world's concerns, and we could take some satisfaction that our government had pushed the agenda. London was flying high and we moved confidently around the city."

This all changed on Thursday when the "howls of sirens on every quarter and the oppressive drone of police helicopters" announced the resumption of the terror's war," McEwan writes. In fact, once the disaster had struck, it had an air of weary inevitability, he says. "In the drizzle and the dim light, the police lines, the emergency vehicles, the silent passers by appeared as though in an old newsreel film in black and white," is how McEwan describes the scene. "How could we have forgotton that this was always going to happen?" he asks. As he eloquently describes how ordinary citizens bravely get back on their feet. ("A woman, with blood covering her face and neck, who had come from Russell Square tube station, briskly refused offers of help and said that she had to get to work.") McEwan hopes that London will not be knocked off course by Thursday's event, saying that is has survived many attacks in the past.

But, he says, "we have been savagely woken from a dream. The city will not recover from Wednesday's confidence and joy in a very long time. Who will want to travel on the tube once it has been cleared? ... And we will face again that deal we must constantly make and remake with the state -- how much power must we grant Leviathan, how much freedom will we be asked to trade for our security?"

15 Bilder Terror in the Press: Newspapers Around the World React