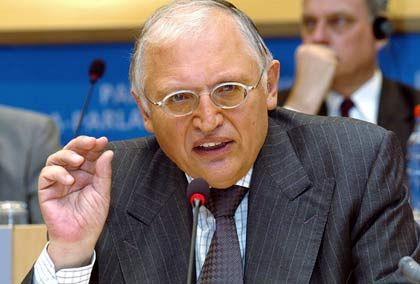 "Too much is being decided by bureaucrats," said Günter Verheugen, Vice President of the European Commission in charge of Enterprise and Industry, in a frank interview on Thursday with the Süddeutsche Zeitung. He said commissioners sitting in Brussels had to be careful not to allow decisions on important questions fall under the control of bureaucrats with no democratic mandate.

Verheugen, a German author and politician, is a long-standing friend of the EU, so his criticisms strike a salient chord. His target, in particular, were civil servants in the the Directorates-General, a department of about 24,000 functionaries who work on everything in the European Union from taxes to sport policy. They're overseen by the EU Commission, which is made up of 25 commissioners chosen by EU member states.

Verheugen complained that some high-level functionaries in the Directorates General presented their own views to member states or the European Parliament as the views of the Commission. Some notes from these bureaucrats, he said, were "technical, arrogant, and condescending."

Verheugen pointed to pesticides as an example of bureaucratic mission creep. Laws regarding pesticides could have major consequences for European consumers and agricultural industry, so according to Verheugen, decisions should be taken at the Commission level. But the Directorates General took the project over, and "the commissioners only learned about it because there was suddenly friction among the civil servants."

To contain their power, Verheugen suggested drastic changes at the EU. "Radical simplifications are necessary in the automotive, construction, engineering, trash-collection and agricultural branches," he said, adding that at least €75 billion in bureaucratic costs could be saved over the next five years, "which could then flow into investments and research."